NKK is an industrial equipment manufacturer of electromechanical switches and programmable displays. The company was founded in 1953 with the intent to manufacture reliable industrial switches.

In 1981, NKK established itself in North America and has since grown to establish itself in Europe and the Philippines. NKK manufactures its products and has factories in Japan, China, and the Philippines. Switches produced by NKK are designed for industrial environments and are available in all standard switch types. These types include toggle, momentary, and slide.

These switches have different characteristics, including environment sealing, voltage and current ratings, and material strength.

NKK recently released the S0109, a single switch HMI solution for industrial applications. The S0109 is a large momentary switch that has a display integrated into the button. However, unlike a standard switch that displays an icon or logo, the S0109 integrates an advanced microcontroller and supporting system, allowing an intelligent HMI to be constructed into a single push button. These capabilities enable engineers and operators to program the switch to display the output of analog signals, detect digital signals, display graphics conditionally, and more.

The integrated display is a monochrome LCD display with a resolution of 36 x 24 pixels, but the backlight to the LCD has 64 color options. The display can show 3 lines of 6 characters (5x7) or 2 lines of 4 characters (7x10), and the backlight offers 8 levels of brightness. The whole HMI switch allows for panel mounting, and the switching action is a momentary press.

The switch integrates multiple I/O methods for communication, including 12 digital/analog IO, PWM, I2C, SPI, and UART. While the switch itself has not received EMC compliance from NKK, it has been reported that a customer using the product has obtained EMC/ESD compliance based on the IEC 60601-11-2:2014. 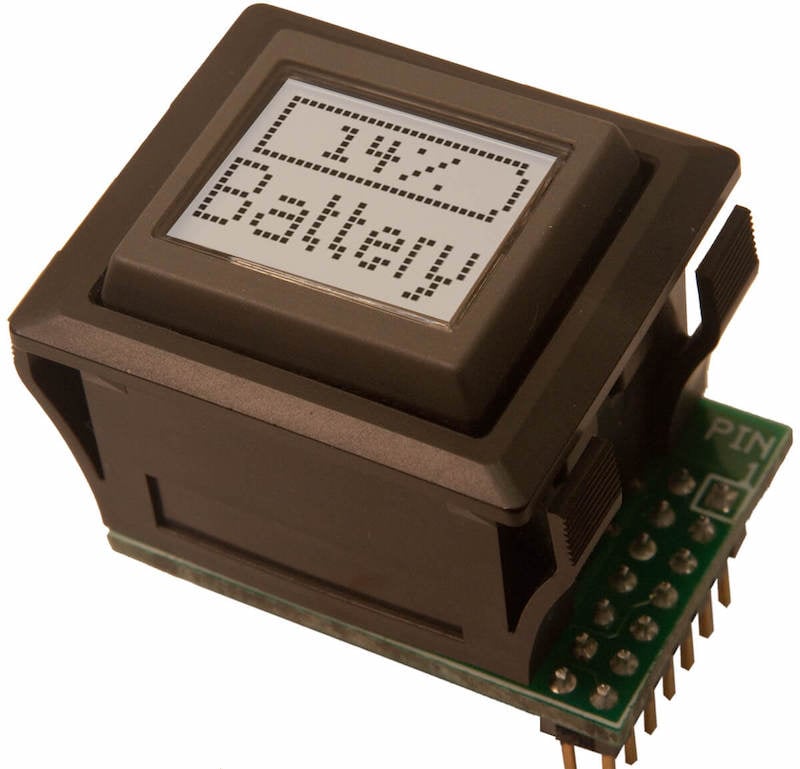 The S0109 single switch HMI solution attached to a circuit board. Image used courtesy of NKK

All I/O is 5V tolerant, and a 2 x 9 pin header provides a connection to external boards for expanding I/O. The S0109 is also available with an evaluation board that allows the S0109 to be seated and connected to external buttons and analog signals for testing.

Applications for the S0109

The S0109 was designed for specific industrial applications that need a plug-and-play system. Customers who cannot program the device, or have a specific application in mind, can contact NKK for customization so that the device can be installed with little to no programming.

NKK explained multiple application examples in the datasheet sheet for the S0109, which further describe the abilities of the S0109. The first example is a jelly bean dispenser whereby pushing the S0109 switch causes a mechanical system to dispense jelly beans. A sensor counts these beans, and the sensor output is fed into the S0109 switch. Once x number of beans have been counted, the S0109 stops the mechanical feed system.

Another example of the S0109 is in an engine monitoring system. The S0109 can read multiple analog values, including oil levels, engine status, and temperature, and push the button cycles through each monitored value.

For those with more microcontroller knowledge, the S0109 is powered by a PIC18F26K40-I/MV. From there, custom code can be developed, or pre-made program hex files can be downloaded to the device using a PICKIT3.

This new switch from NKK hopes to ease some of the troubles that engineers face with traditional switches used in industrial settings.