Acromag announced their BusWorks NT2000 series of remote I/O modules with an expansion bus to support three more I/O modules that can operate up to 64 channels.

Acromag is known best for its line of remote I/O and embedded I/O solutions. The company has added the BusWorks NT2000 to their portfolio of Ethernet remote I/O modules. The NT2000 line is engineered to provide a compact and scalable network interface solution for controlling and monitoring discrete device levels. 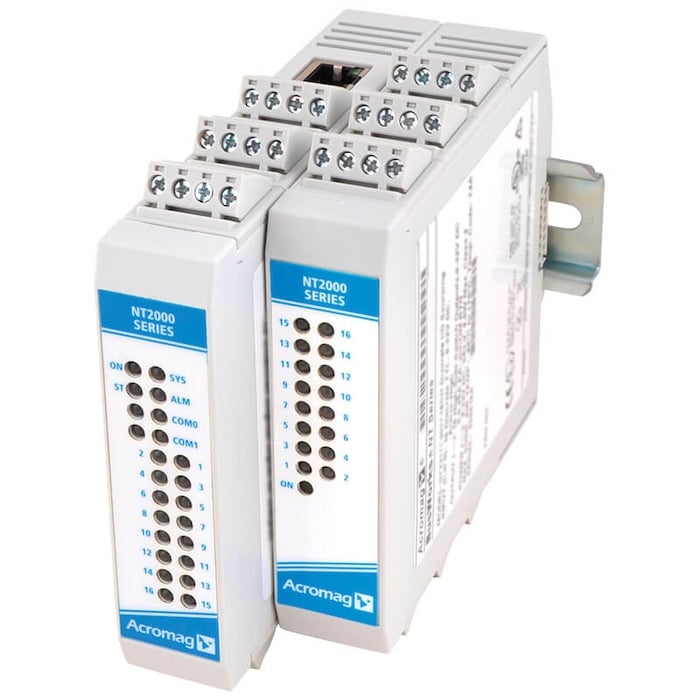 The BusWorks NT2000 by Acromag is a scalable line of compact remote I/O modules that can be combined to provide up to 64 channels. Image used courtesy of Acromag

The NTE models have dual RJ45 ports along with a web server that has Modbus TC/IP communication capabilities to provide both monitoring and control of internal I/O channels. An isolated RS-485 bus is what allows the expansion modules to be linked to the Ethernet module via connectors along the DIN rail. This internal NT bus is used to distribute both communication signals and power between the modules.

Each NTX expansion module adds up to 16 I/O signals that support a mix of temperature, current, voltage, relay control signals, and TTL. All signals are then networked onto a single IP address. Note that the discrete I/O modules have 16 tandem channels with either a sinking/sourcing output or active high/low input. The analog models have 8 differential or 16 single-ended inputs used to monitor either voltage or current signals.

While the modules usually function as a network slave, the NT2000 modules can transfer data among themselves without requiring a master or host because they include Acromag’s i2o peer-to-peer communication technology.

There are several different types of modules currently available in the NT2000 product line, with two basic series: the NT2100 series for discrete inputs and the NT2200 series for analog input.

The NT2110 modules provide 16 bidirectional discrete I/O channels intended for use with low-side (i.e., sinking switch) applications. The modules are designed for the control and monitoring of contact closures, relays, TTL logic, and solenoids. They can also be used with discrete sensors on doors, lamps, valves, and motors.

The NT2130 modules provide six 5A mechanical relays along with six discrete inputs. These modules are well-adapted for use in on/off monitoring, detecting the open/close status of doors, gates, and values. They can also be used in controlling lights, pumps, motors, fans, or heaters.

The NT2120 modules work with the same applications as the NT2110 but differ in that they make available 16 bidirectional discrete I/O channels for use with high-side (i.e., sourcing switch) instead of low-side switch applications. 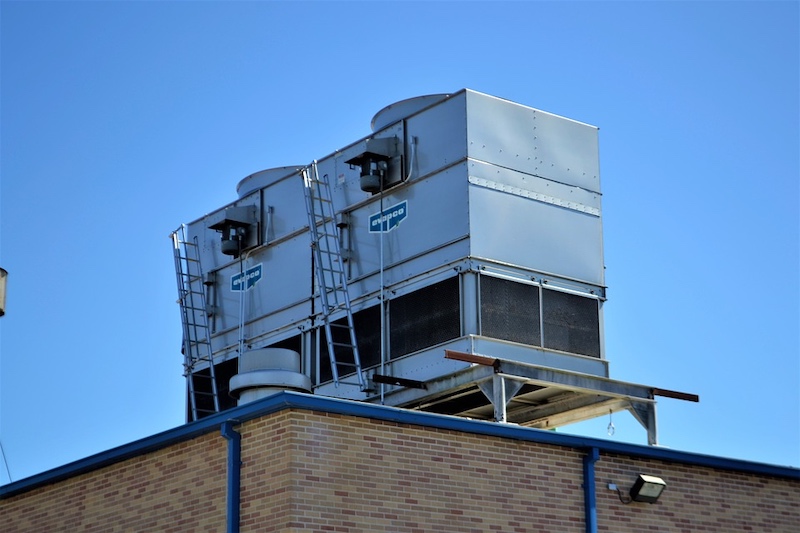 The BusWorks NT2230 and NT2240 work well with the type of data related to HVAC control systems. Image used courtesy of Pixabay

The NT2210 are Ethernet analog modules that provide 8 differential current inputs and 2 discrete I/O inputs. These modules can be used to collect data such as level, flow, temperature, and pressure from sensors, transducers, and transmitters. Similarly, the NT2220 modules make available 16 single-ended current inputs and can be used with the same applications as the NT2210.

The Acromag NT2000 series only supports Modbus TCP/IP communication but, according to Acromag, the plan will support Profinet and Ethernet/IP modules. The BusWorks NT2000 series is already available for purchase through the manufacturer’s website.