The new controller also supports other common communication buses, including PROFINET and Modbus RTU. The controller uses up to 32 NRG relays in a single chain.

The NRG system is designed with industrial heating applications in mind where temperature control is critical to the production of the process in question. These applications include plastic injection systems, semiconductor manufacturing, and glass tempering.

In a press release, Dorianne Grech, International Product Manager of Carlo Gavazzi, stated, “In recent years, Industrial Ethernet protocols have taken over serial fieldbus protocols, mainly due to their faster communication speed. After the recent launch of the NRG with PROFINET, we are now providing an additional solution for easy and efficient integration of the NRG in EtherNet/IPTM networked machines.”

What is an NRG Chain?

Industrial systems of the past would utilize dedicated communication buses such as serial ports and analog wires to connect a PLC to its actuators and sensors. These buses can present engineers with several challenges, including developing a reliable protocol, the choice of connector, and the large number of dedicated cables going between the equipment and the PLC.

NRG chains are also daisy-chained connectors meaning that each relay connects to the next relay in the chain. This saves costs on cabling, reduces complexity in wiring, and allows multiple devices to share a common bus.

Thirdly, NRG chains have a single communication device that links the PLC to the relays using common industrial buses. The latest NRG release, which supports EtherNet/IP, allows for systems to use commonly used Ethernet cables. This can increase data throughput while further decreasing cable costs. 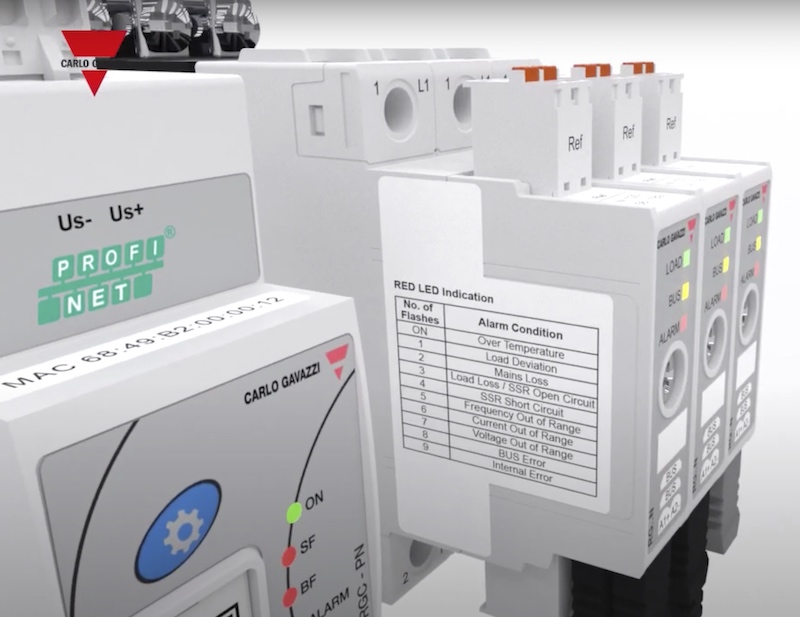 The NRG solid-state relays come in various powers and capabilities depending on the task they are used for. The DIN rail relays support ratings up to 660VAC (90A), have ON/OFF power controls, and provide selectable switching modes.

The NRG Devices and Industrial Applications

Users can deploy the NRG series into most industrial applications that include various power devices. Since relays provide ON/OFF controls, the NRG series cannot control servos, but the series is aimed for use in strict temperature environments.

Daisy chain technology allows industrial designers to minimize the amount of cabling used in their systems, which is suitable for economic reasons and ideal for future maintenance. This means that a system based on the Carlo Gavazzi can be serviced even when the original designers have left their respective companies.

Daisy-chaining can also allow engineers to more easily make modifications. This is important as automation is continually changing how industrial processes work.