Cognex introduced the In-Sight 3D-L4000, a vision system aiming to increase the efficiency and cost-effectiveness of inspection.

The In-Sight 3D-L4000 uses a 3D laser displacement system and a smart camera for data collection, combined with a software package that can perform numerous measurements on an automated production line.

John Keating, 3D Business Unit Manager, said in a recent press release, “until now, 3D has been too expensive to solve inspection applications for most customers" but the In-Sight 3D-L4000 breaks the mold "by providing a massive suite of true 3D vision tools.”

To improve the accuracy of the In-Sight 3D-L4000, Cognex developed and patented a speckle-free blue laser. With laser measurements, the laser light can form areas of constructive and destructive interference, making bright spots and dim spots, respectively.

The speckles are a common problem, particularly on reflective surfaces, such as highly-chromed or white-painted surfaces. The speckle-free method ensures measurements are taken accurately and quickly, with fewer repeated measurements required. 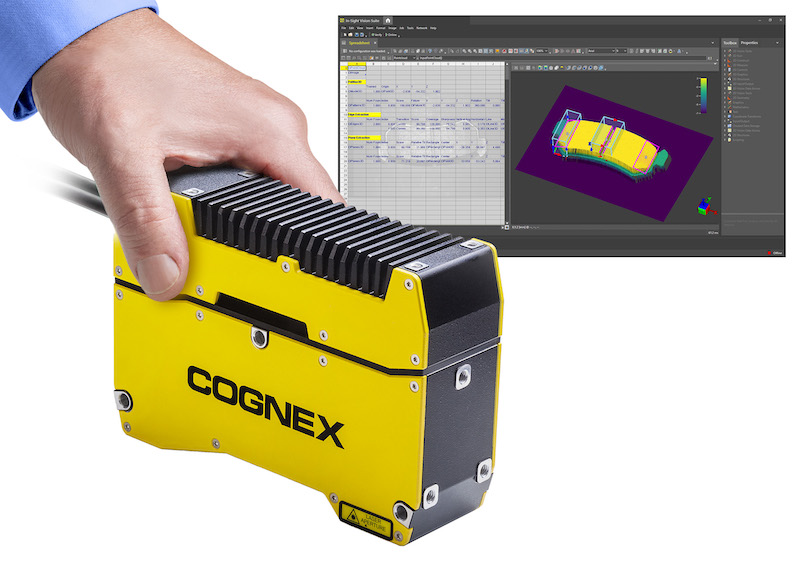 The system will see use in most manufacturing environments, but testing has already begun in the automotive, electronics, consumer goods, and food and beverage industries.

Cognex demonstrates that the system can be used to check the fill level of paint cans to measuring brake pad dimensions or checking for broken cookies before packaging.

The software can detect cracks in products, irregularities in coatings, misaligned parts, warped areas in materials, loose caps or screws, or incorrectly-sized goods, which could benefit most manufacturing environments.

Cognex has several L4000 series models available, depending on resolution, measurement area, and standoff distance required for the application. 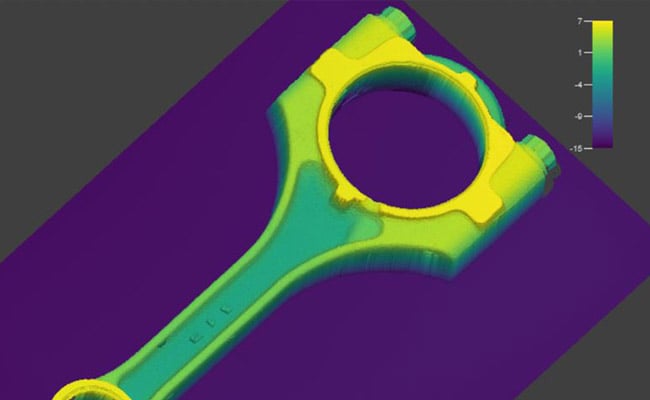 A piston connecting rod captured from the In-Sight 3D-L4000. Image courtesy of Cognex.

The L4050 has the smallest measurement area and standoff distance, yielding the highest resolution of the line. It can detect horizontal changes of as small as 30.2 microns (1.19 mil) and vertical changes as small as 2.5 microns (0.098 mil).

Regardless of the specific model, the package can interface using Gigabit Ethernet or M12-8 X-coded connections. It is powered by a 24V DC connection, requiring a current of at least 750 mA. At 0.94 kg (2.07 lb), it can be easily mounted and reconfigured as product lines or manufacturing demands change.

The Software Suite and Data

In addition to the laser system, the software suite provided will aid in several inspection tasks. The software can measure gaps, angles, and lengths, calculate volumes, recognize patterns (for part counting and inspection), and find unusual convexities and concavities in surfaces—even when viewed at an oblique angle.

Much of this data can be analyzed using a spreadsheet rather than by writing code, meaning the turn-around time from package to use is very quick.

Overall, the Cognex In-Sight 3D-L4000 series vision system offers a high-resolution 3D laser sensor and a robust set of software measurement tools that may improve the efficiency and speed of most inspection tasks.

Virtually all manufacturing and quality control departments can find a use for this system.