Eaton Electronics brands itself as a power management company with solutions for mechanical and hydraulic power in addition to electrical power. While they maintain a strong presence in non-industrial markets, the company has made moves at the end of 2019 and beginning of 2020 that indicate intentional investment in industrial markets.

Out with the Old: Eaton Sells Its Automotive Fluid Conveyance Division

Last week, Eaton made public their sale of their Automotive Fluid Conveyance Division to Quantum Capital Partners, a Florida-based capital investment firm with a focus on the Southeast US. According to Eaton, the division has employed 1,300 people across Europe and China.

The significance of this move is that the division in question represents some of Eaton's hold on the power management that occurs within individual vehicles such as individual cars, commercial vehicles, and even "refuse vehicles" such as garbage trucks. This division was responsible specifically for hydraulic power within such vehicles, including power-assisted steering, air conditioning, and oil cooling. 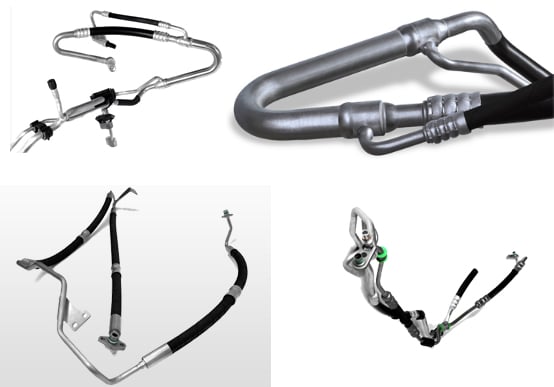 Renderings of some of the Automotive Fluid Conveyance Division's products, including an active suspension system, an air-conditioning system, and power steering lines. Images (modified) used courtesy of Eaton

The conveyence of fluids (including oils and air) through a vehicle is critical for vehicle power management. Automotive manufacturing has been and will almost certainly continue to be an important part of Eaton's war chest, but they've also made recent moves that focus on the aerospace industry.

On December 20th, Eaton announced the acquisition of France-based Souriau-Sunbank's "connection technologies" from Ohio-based TransDigm Group Incorporated. In this instance, "connector technologies" indicates an important niche in connectors used for electrical power in aerospace applications, another of Eaton's primary markets.

This is signficant as the company's current aerospace page lists motion control, hydraulic systems, fuel and inerting systems, and engine solutions as their technological foci. This acquisition will likely necessitate an update to this list as electrical power systems almost certainly belongs on this list now as Souriau-Sunbank has a large portfolio of several families of aviation-related power connectors.

Rumblings of this acquisition were first made public in July of 2019, when it appears that most of the minutiae of the deal were worked out (including the $920 million price tag for the acquisition).

Industrial connectors are a booming business and Eaton is facing competition from companies like TE Connectivity, Amphenol, Molex, and Hirose Electric. These recent moves show that Eaton is moving towards consolidating their focus in certain areas. Since avionics is also a booming business, it seems that this is a calculated move.