Based in California, U.S., Everactive specializes in creating batteryless Internet of Things (IoT) solutions to “unlock an age of self-powered computing.” The company was established by Benton Calhoun, Brendan Richardson, and David Wentzloff in 2012 and has raised more than $98 million in investments in just one decade. The success behind Everactive’s attractiveness for investors lies in its core circuit design and wireless communication IP, which has served as the building block for the company’s batteryless, self-powered IoT systems. Everactive built on that patent and added various complementary tools based on the same concept, including cloud software, data analytics, systems expertise, and industrial design.

The company released its first self-powered STM solution in 2018, which was already capable of providing real-time insights via a proprietary algorithm.

Steam traps are relatively old technology. From a technical standpoint, these devices are simply tools used to discharge condensates and non-condensable gases with a minimal loss of live steam. In other words, they can be considered automatic valves: They open, close, and modulate autonomously.

Condensate in the heat transfer unit effectively reduces the physical size, and therefore the capacity of the equipment, so it must be removed promptly. Steam traps must consequently be constantly monitored—not only to grant optimal functioning but also to avoid leaks and failure.

Like most aspects of industrial manufacturing today, monitoring steam traps have been greatly enhanced in the past few years. Current IoT devices can now gather a vast amount of monitoring data from steam traps, but Everactive’s batteryless STM system aims to further push the technology limits.

The solution allows for direct connection via wireless IoT gateway using the Evernet 2.0 wireless network and removes the need for batteries by harvesting energy through ultra-low-power sensors. 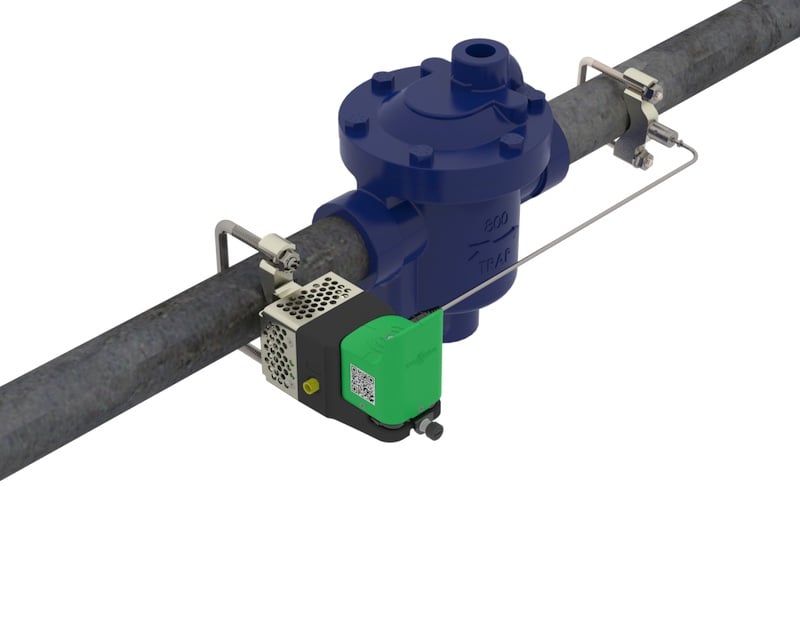 The latest version of Everactive’s STM improves on its predecessor by delivering wireless non-line-of-sight communication up to 250 m (820 ft), as well as an increased capacity of its IoT gateways to 1,000 Eversensors.

The company has also streamlined the installation process of the sensors onto the steam traps via an auto-pairing feature and QR code provisioning.

Towards a Greener Future

According to recent data gathered by Everactive, real-time steam trap monitoring could potentially save up to hundreds of millions of dollars in energy costs worldwide, as well as reduce carbon emissions by over 280 million tons. The company has reportedly deployed several thousand STM across dozens of customer sites since the original launch in 2018, with Everactive sustaining the number will continue to grow.

“Our current steam trap monitoring solution is a unique product in the market, and we are experiencing explosive growth,” commented Keal Harter, Director of Product Management at Everactive. The executive believes that the adoption of steam trap monitoring sensors is rapidly expanding worldwide, and the company has upgraded its STM system to better serve the market’s needs. “I’m really excited about the potential this unlocks to accelerate adoption and scale implementations at existing and new customers,” Harter concluded.