Learn about obstacles businesses face implementing predictive maintenance and how to overcome them.

Equipment maintenance is a cost factor that every company wants to optimize. The ultimate goal of maintenance is to keep equipment running optimally with the minimum amount of work possible. Thanks to modern technology, achieving this goal has been a decades-long pursuit of several industries and is increasingly becoming possible.

The first known application of a PdM program was in the United Kingdom during the Second World War. A scientist named Conrad Waddington was tasked with helping the British military improve their equipment’s combat effectiveness.

Waddington recommended prolonging maintenance intervals and removing all invasive inspections that were not beneficial. This resulted in a significant increase in aircraft availability and became known as the Waddington Effect.

Over the next several decades, these new maintenance practices became popular in the commercial aircraft industry. Then, toward the end of the century, it began to permeate other sectors, such as manufacturing, oil, gas, and communications. As with many other concepts, PdM is going through a new revolution propelled by new technologies, cloud computing, and IoT, or what is known as Industry 4.0.

As the name implies, PdM aims to predict equipment failures and breakdowns. Modern PdM uses smart technologies to interface with the physical process and monitor conditions.

The data generated by sensors is collected in central repositories, either in the cloud or on-premises, then analyzed to detect trends and issue recommendations. The main goal of these recommendations is to execute a repair or replacement at the right time before a breakdown occurs. PdM changes the traditional way of doing things, moving away from pre-scheduled plans and toward real-time maintenance based on actual wear and tear.

There are many condition monitoring sensors that can measure different variables and behaviors in a process. The more sensors, the better, because there will be more data available. With this, businesses can create a digital twin, a computerized replica of the facility and processes that can simulate changes.

IoT plays a crucial role in connecting field devices to higher-level applications, where data analysis and administrative functions are performed.

The predictive algorithm is the heart of the PdM program. Building an accurate algorithm requires large amounts of data and is usually improved over time. 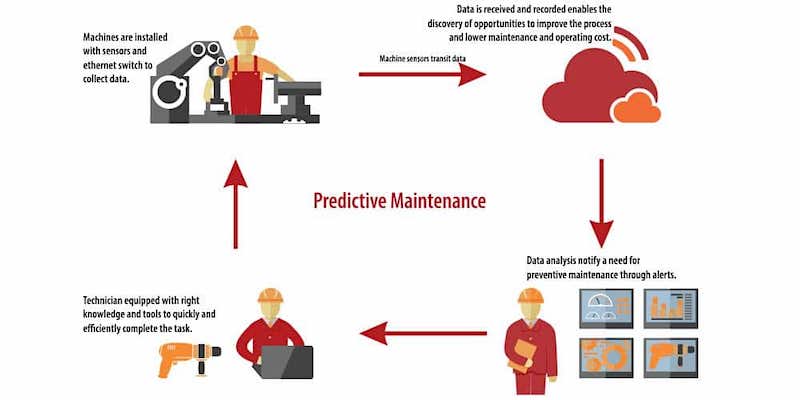 Like any other innovation, PdM comes with its challenges, advantages, and disadvantages. The following sections describe some of these, focusing on the manufacturing industry.

Complexity is a major stumbling block that many established manufacturing businesses face. The story is also different when discussing a brownfield installation versus a greenfield. The level of complexity of a PdM solution is one level higher than a traditional automation project. A certain level of process automation is a prerequisite for PdM.

On the other hand, complexity is a subjective criterion. Concepts such as IoT, cloud-based solutions, and smart sensors require mastering skills, many of which are still relatively new in the applied fields.

The first step for any manufacturing business to overcome mistrust in modern technology is to learn. Training key employees is the first milestone. Unfortunately, many companies are still stuck in the preliminary step of deciding whether or not to automate processes.

Another important challenge to adopting a PdM solution is the large initial investment. Companies seeking to do this may shop around for different vendors and technology brands, but this might not significantly change the initial investment. Businesses need to look beyond and toward the substantial savings that PdM can bring.

According to a U.S. Department of Energy study, a well-implemented PdM program can reduce maintenance costs by as much as 30%. Also, thanks to improved asset utilization, it is estimated to have a return on investment (ROI) of 10 times or more.

Another factor not often quantified is the savings brought by reducing downtime and the resulting increase in production. A major equipment failure can result in hours or even days of production stoppage. Depending on the equipment’s criticality, the financial impact of a failure can be severe.

Information security is increasingly becoming the main factor making businesses hesitant to adopt PdM. Recent ransomware attacks have targeted manufacturing facilities, which was not as common before the rise of IIoT. A PdM solution involves opening processes that have historically been isolated from the outside world.

Field devices send information to higher-level applications for analysis. The Manager of Executions System (MES) is increasingly becoming the de-facto PdM high-level application. To establish connectivity, it is important to place strict network segmentation practices, such as a DMZ (networking demilitarized zone).

It is also important to consider legacy systems. Many such systems are running on old hardware and operating systems that may not have been installed with security patches for several years.

It is recommended to complete a risk assessment of legacy equipment as part of the decision-making process for implementing PdM. The assessment result might be that at least a portion of the manufacturing assets need to be upgraded or replaced.

Even though there are challenges and drawbacks associated with PdM, the end result is worth the investment. Keeping engineers and technicians up-to-date with advanced equipment not only helps the business move forward, but also helps employee retention. The cost savings associated with PdM is also beneficial to consider.

What have you used PdM for in your facility? How has your company moved past the potential challenges of implementing it?