The four new models, the E96, E86, E76, and E54 models have a finer resolution (640x480, or 0.3 MP) than previous Exx-Series models. They also have an 8x optical zoom, FLIR Inspection Route native to the camera, and other useful troubleshooting features.

The higher resolution available with these cameras will help technicians and engineers pinpoint hotspots in equipment. Hotspots arise in areas with high friction, such as bearings that are wearing out or poorly lubricated. By detecting these spots early, preventive maintenance can be scheduled before a catastrophic failure.

In industrial electronics, thermal imaging is used to troubleshoot components and to verify the presence of high current.

The electrical energy lost as heat can be calculated by Power = Current ^2 * Resistance (P=I^2*R). Any increased current or resistance will generate more heat.

One of the biggest industries to benefit from these high-resolution thermal imaging cameras will be the metals and heat-treating industries. In metal casting and metal heat treating, technicians struggle to find a way to measure temperature effectively.

Many industries can be served using thermocouples or RTDs to measure temperature, but the high temperatures and the corrosive and reactive environments found in metal casting are not suitable for these probes. 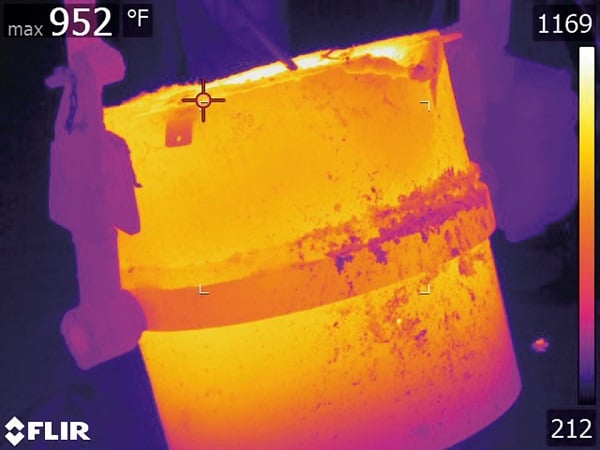 External temperature of a ladle charged with molten steel. Image courtesy of FLIR.

Steel processing requires very tight control of temperature. At first glance, it seems simple to just heat scrap metal until it melts. At any point in steel processing, the temperature must be known.

However, a glance at the iron-carbon phase diagram shows many solid phases, each with different mechanical, thermal, and magnetic properties.

For example, steel at 0.83% Carbon is solid at around 1430 C (2600 F). Even though it is solid, it is non-magnetic until the temperature drops below 727 C (1341 F). This can be concerning for the overhead magnetic crane operator that routinely moves steel from a hot furnace to an outdoor cooling yard to a rolling mill to give the steel its shape. 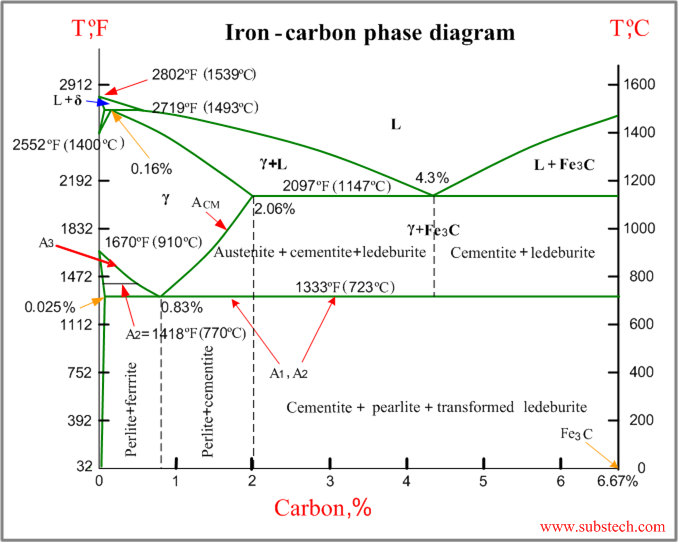 Once in the rolling mill, heating and cooling stages must be measured quickly and accurately to keep the steel from transitioning into the wrong phase and potentially becoming brittle.

When steel blooms are shaped from square blooms into I-beams, channels, rebar, and other shapes, they are forced through a series of rollers at a specified temperature. The temperature control ensures that steel is being “hot worked,” meaning it is annealing and relieving stress as it is being processed, versus “cold worked,” meaning the steel is not relieving stress during processing.

There are mechanical advantages to both hot and cold working, but the operators must know the temperature within a few degrees to ensure proper rolling.

A foundry technician can quickly measure the temperature and decide the next processing step for each piece of material with a thermal imaging camera, whether it needs to be reheated or allowed to cool for longer.

They can adjust the cooling on the rollers to ensure proper temperature control through the rollers or whether it is safe to pick up steel blooms with an electromagnetic crane in the cooling yard. The new FLIR Exx-series cameras can detect temperatures up to 1500 C (2732 F), suitable for most process safety and material processing applications.

These cameras have high resolution, with 640x480 pixels available on the camera body itself, so that an operator can quickly locate and diagnose problems. These cameras also have 8x digital zoom, meaning an operator can look more closely at a potential problem without physically moving closer to a hot or dangerous environment.

The new FLIR Exx-series cameras can be used with the FLIR UltraMax software package. Images captured with the camera can be analyzed as though they had been taken with a resolution of 1280 x 960 (1.2 MP). Images are sharp, not simply “zoomed in.”

They also are capable of a quick lens change. With the AutoCal system, lenses can be removed and replaced for wide-angle images or close-up shots. The lenses are fitted and calibrated automatically and can be changed in a few short minutes.

Overall, the new line of FLIR Exx-series cameras offers some distinct advantages in metals processing industries and any industry that must do troubleshooting of mechanical or electrical devices.