KUKA adds to their product line of SCARA robots. SCARA robots are great for applications with fast, short movements. By adding to its SCARA lineup, KUKA is ensuring its foothold in the industrial robot market.

KUKA is expanding their market reach by introducing seven new robots in their KR SCARA series: three cleanroom and four standard versions. With a payload range up to 12 kg, KUKA's payload isn’t the highest of SCARA robots on the market, but the latest additions widen KUKA's product offerings.

When designing manufacturing equipment, consistentency with robot manufacturers is important so that maintenance staff doesn’t have to be trained in multiple robot programming environments. With KUKA now offering an expanded line of SCARA of robots, they increase the chance of their products being used as a single source for automated equipment. 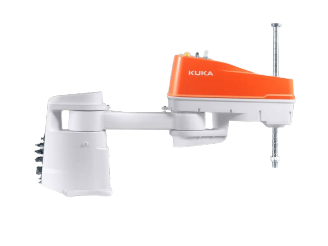 A SCARA robot is typically a small robot that has four axes and is quite fast. Axis one and two work independently while axis three and four are internally joined to provide both vertical and rotational motion. SCARA robots have a distinct shape with the Z-axis shaft extending above the long-shaped body. Pneumatic and electrical connections typically run through the base and up to the second axis. The downside to SCARA robots is their reach and payload capacity.

Just about every industrial robot manufacturer has a SCARA robot model with varying payloads and working envelopes. Epson is well known for its line of SCARA robots with payloads ranging up to 20 kg and a reach range of 0.175 m - 1.0 m. ABB is another example, with three versions of SCARAs that range in a maximum payload of 3 kg - 6 kg and a reach of up to 0.65 m. KUKA's now expanded line of KR SCARA robots offers a maximum payload of up to 12 kg and a maximum reach ranging from 0.5 m - 0.850 m, depending on the model.

SCARA robots work well in applications that require fast, short-range motion, which typically consists of pick-and-place applications. An example would be electronics assembly—pharmaceutical applications such as dispensing or packaging work well with SCARA robots as well.

Some manufacturing environments need to be a certified “cleanroom” by ISO 14644-1 standard, which restricts the allowable size of any particulate in the room. This restricts robot manufacturers in the materials they can use to make their robot arm and the type of lubricant they can use within the robot arm.

Having a cleanroom model robot also means it will have an IP rating which denotes the amount of dust or water ingress the robot can withstand. FANUC, for instance, has an IP67-rated industrial robot, which means the robot can be subjected to hot water washing without interfering with the electronics of the robot. The KR SCARA cleanroom models have an IP54 rating, which is rated for dust and water splashing in all directions.

Solutions From a Single Source

The KR SCARA additions make for an attractive option when considering KUKA for industrial robot needs. By offering an extended product line, KUKA strengthens their foothold as a world leader in industrial automation solutions, providing customers with equipment from a single source.