OMRON developed the i4 series SCARA machines to automate high-speed and high-precision assembly, as well as transportation processes.

The i4 Series SCARA Robots

Both models are compatible with OMRON’s robot-hands, allowing engineers to select different end effectors based on the task required and consequently automate it.

Diagnostics in the i4H model is shown via the multi-colored LED lighting ring indicators and display, while the i4L series offers a multi-color LED light dome.

LED indicators on the i4 series SCARA robots. Image courtesy of OMRON.

Finally, the i4H model comes with an IP65 rating, and in ESD and USDA options.

According to OMRON, the need for automated robots is sharply rising worldwide due to the pandemic effects and general labor shortages.

SCARA robots could help tackle this issue thanks to their easy installation and high-speed work environment automation capabilities. Still, compatibility issues between these machines and peripheral devices can often hinder the adaptation process.

The i4 series aims at circumventing these issues by integrating and controlling the end effector and peripheral devices at high speed and with high precision via a Robotic Integrated Controller. Supporting a 15kg payload and incorporating EtherCAT communication inside the robot arm, the machines can then deploy in cooperation with various handling and OMRON's Robotic Integrated Controllers. 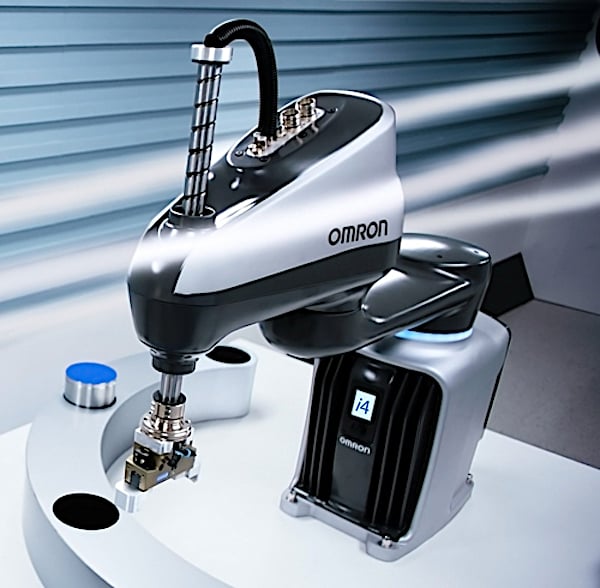 A robot from the i4 Series SCARA. Image courtesy of OMRON.

Among these, the i4 series is compatible with a heavy-end effector, enabling the machines to perform assembly and transportation processes that could not be automated with SCARA robots in the past.

To minimize the robots’ footprint, both control box and cables are fully integrated into a stylized base. The i4 series SCARA robots also facilitate programming efforts thanks to the "Sysmac Studio" integrated PLC programming software.

The program allows for the simulation of equipment performance at an early stage of design, thus enabling electrical designers to program equipment accordingly. The new machines’ software capabilities can also reduce downtime thanks to their dedicated maintenance features.

The i4L series offers Ethernet and EtherCAT connectivity, enabling compatibility with traditional simple controls, as well as adaptations to a broader application range.

These robots can be mounted on a horizontal surface via a table mount or a vertical surface via wall mount without the need for additional adaptors or brackets.