RE2 has been chosen to develop further control systems for underwater robotics to be used in industrial environments.

In particular, they will integrate the motion capabilities of an underwater remote-operated vehicle (ROV) with the fine motor control used in its arms for lifting, inspecting, and performing tasks into one unified control system.

ROVs and the Navy

For decades, the United States Navy has used ROVs for exploration, surveillance, and military purposes. The need for underwater exploration was demonstrated after a “Broken Arrow” incident in 1966, where a mid-air collision dropped one nuclear weapon into the Mediterranean Sea.

Besides locating missing submarines and missiles, the Navy also saw the benefit of having an underwater robot perform other tasks, such as espionage and mine-laying and mine-removing activities. A properly designed ROV could dive deeper, work longer, and riskless personnel than divers could.

For the past 20 years, RE2 (pronounced “R E Squared”) has been producing robots and control systems to serve several industries, including aviation, energy, construction, marine, and defense. Their control systems are used in the air, on the ground, on the sea, underground, and underwater. There are very few places on Earth that an RE2-designed machine cannot go.

RE2 is no stranger to the ROV market. In 2020, RE2 was awarded $2.5 million to develop the Dexterous Maritime Manipulation System (DM2S). This new system is specifically designed for detecting and disarming underwater mines. They recently added new features to this system to improve its manipulation and control capabilities. 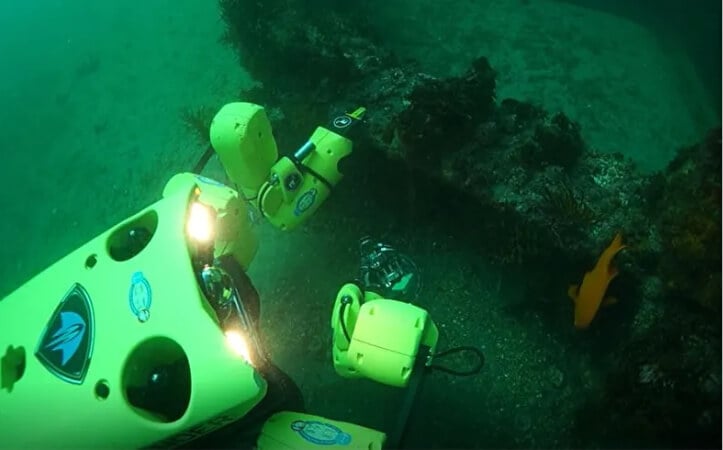 The DM2S investigates an object with its robotic arms. Image used courtesy of RE2

One possible scenario is to equip an underwater mine with a light sensor and a counter. The culprit drops the mine and leaves. Every time a ship passes overhead, the light sensor detects the ship’s presence and increments the counter. At a preset number of ships, the mine detonates, maybe months after the culprits have escaped to safety. This is precisely the type of threat that the DM2S can search for and disarm.

The original DM2S had two sets of controls: steering the craft and operating the manipulating arms used for disarming mines. This required one operator to manipulate both sets of control systems, switching between them and potentially wasting valuable time. Alternatively, two operators could work together, one manning each control.

The Coupled Locomotion And Manipulation System (CLAMS) will integrate these sets of controls into one package that can be operated by one control operator. On the surface, this looks like an easy task, but numerous technical challenges must be overcome to make this possible.

The DM2S hopes to continue to improve the safety of the harbors and ports. CLAMS will make this process more efficient and easier to use. Outside of defense purposes, the petroleum and gas industries could use this ROV for inspection and minor repairs of underwater pipelines.