Renesas has released its new ASSP IC, the ASI4U-V5, with a clear focus on supporting industrial automation applications.

All images used courtesy of Renesas

ASi-5 is the fifth specification version of the Actuator Sensor Interface, also known as the AS-Interface or ASi. ASi is a protocol and method of physical layer access that is specific to industrial networking use. It has helped reduce the need to hardwire field devices, reportedly enabling easier integration of smart sensors as compared to Ethernet systems.

Additionally, ASi can work in tandem with familiar fieldbus networks such as Profibus, Interbus, and others.

A simplified view of how AS-i interacts with a larger industrial Ethernet system.

The ASi has been an industry standard for over 20 years and is used across many companies.

ASi-5 is the most recent version of the ASi. Renesas said in the ASI4U-V5’s release statement that ASi-5 improves on the performance of ASi-3, allowing the fastest-yet transfer of large data volumes across 96 slaves per segment with a cycle of 1.27 ms.

Renesas introduced this new ASSP with a goal of reducing complexity when implementing ASi-5. To aid in this, While looking forward towards increased use of ASi-5, the device is also still compatible with ASi-3.

According to Renesas, the device utilizes OFDM or Orthogonal Frequency Division Multiplexing, a method of digital data encoding that has become popular in wireless network applications. It also supports choice in topology (including line, star, tree, and others).

Other noteworthy features include enhanced diagnostic functionality, resistance to electromagnetic disturbance, and “field-proven” firmware that does not require additional programming by the engineer. 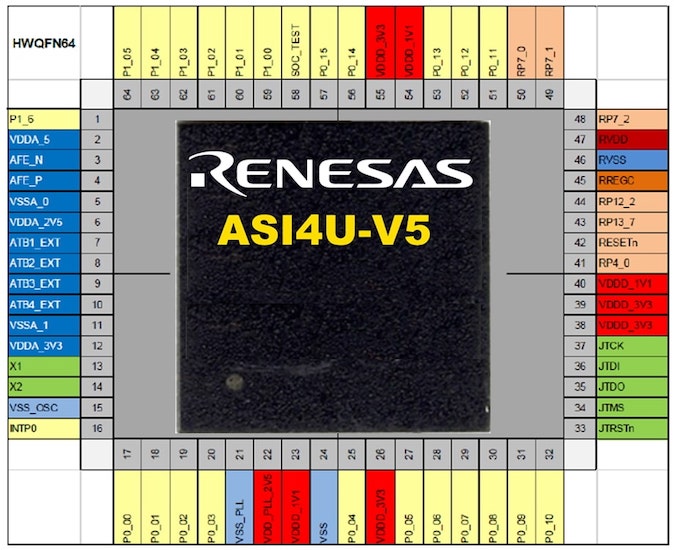 Renesas does have a pre-existing portfolio of devices tailored for industrial automation applications, including network processors, the TPS-1 chipset for Profibus, and devices that allow for ASi-3 implementation. As stated previously, however, the ASI4U-V5, however, is the first to bring ASi-5 into a silicon solution.

This new IC is obviously posed as a way to help bring facilities into the Industrial IoT. At a time when new smart sensors are seemingly introduced everyday, Renesas here turns an eye towards how to integrate them into existing facilities.

In the release, Niels Trapp, Renesas’s Senior Director of Industrial Automation Business, says the ASi-5 interface “constitutes the shuttle into digitization for millions of connected industrial endpoints and devices at the edge.”

What is your experience with ASi-5? How has the integration of smart sensors affected your work so far? Share your experiences in the comments below.