A collaboration between the media and technology experts in Chiari, Lombardy, has seen the printing of a hundred Venturi valves for reanimation devices needed to tackle the COVID-19 emergency.

On March 13, the hospital of Brescia, in Northern Italy, realized they were running out of valves, and that suppliers would not be able to provide them in time.

One of the most immediate dangers caused by this novel coronavirus is the extremely high number of people requiring oxygenation to live through the infection long enough for their antibodies to kick in and fight it. However, oxygenation is only possible through working reanimation machines.

Fearing dire scenarios that have already been witnessed in some parts of Italy, the Giornale di Brescia newspaper sent out a national distress call that was picked up by physicist Massimo Temporelli, founder of innovative manufacturing solutions startup FabLab, based in Milan.

Unable to move outside of the city because of restrictions on movement imposed by the Italian Government, Temporelli alerted entrepreneurs, engineers, and laboratories in the Brescia area, looking for someone able to 3D-print the missing valves.

Using 3D-Printing to Work Together

Temporelli’s search resulted in him connecting with The Institute of Studies for the Integration of Systems (Isinnova), which is based in Brescia, near the hospital. 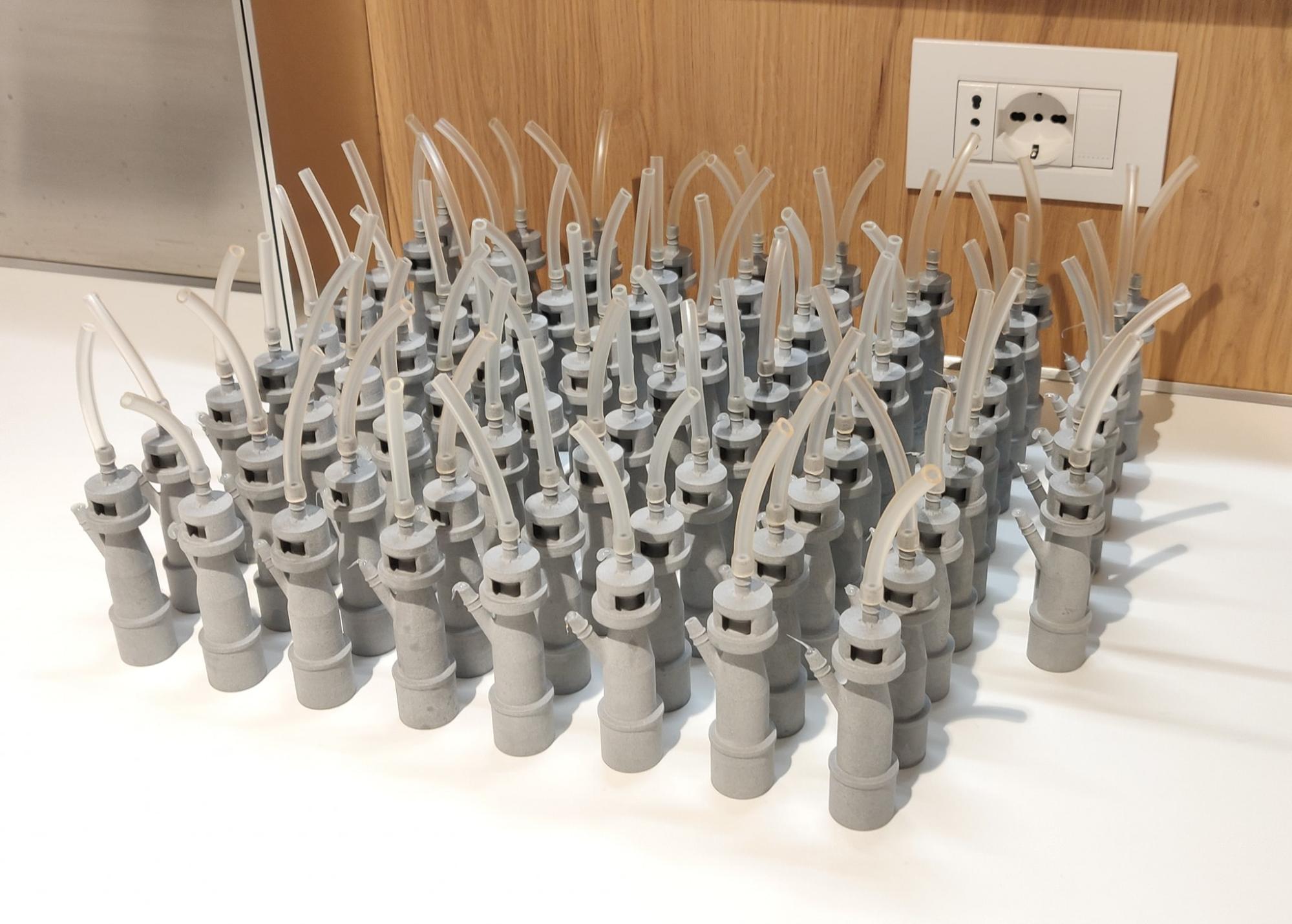 There, Isinnova’s Founder & CEO, Cristian Fracassi, and material engineer, Alessandro Ramaioli, worked with Temporelli and started manufacturing valves in which prototypes were ready in less than six hours.

Within a 24-hours window, roughly 100 valves were printed, allowing the Brescia hospital to have the necessary amount to treat its current patients.

“This is an uncertified piece, but we had no alternative”, said Temporelli, commenting on the news.

The global implications of the COVID-19 pandemic on industrial manufacturing are still uncertain. This is due to many factors, but supply chain shortage is probably at the top of this list. In such a fast-changing scenario, it is only a matter of time before alternative measures need to be taken to tackle emergency situations related to this health crisis.

Case in point, the design files for the Venturi valves printed by Fracassi and Ramaioli belonged to an unnamed medical device manufacturer who typically sells the valves for about $11,000 each. These low-flow masks use the Bernoulli principle to entrain room air when pure oxygen is delivered through a small orifice, resulting in a large total flow at predictable FIO2.

When the volunteers asked if they could use the files to face the emergency, the manufacturer threatened to sue them. So despite working against the clock, Fracassi and Ramaioli had to measure, redesign and finally mold the valve, bringing its actual economic value to about $1.

Fracassi has since written a lengthy post on Facebook (in Italian) criticizing the manufacturer's search for profits in global emergency times such as this.

The CEO stressed that Isinnova has no intention of monetizing out of the designs and that sharing the files with other hospitals around Italy could actually save lives.

“We could share the file on the network of labs around Italy and solve any similar problems that are emerging in other hospitals," the post said.

In fact, while the valve design is still understood to be protected by copyright, other companies have already started using it.

And while the first valves were 3D-printed using a filament extrusion system, the models later 3D-printed by  Lonati SpA, another Brescia company, were made using a polymer laser powder bed fusion process and a custom polyamide-based material.

Italy has over 31,500 COVID-19 confirmed infections and more than 2,500 confirmed deaths, the highest registered outside of China.

Global map of case numbers reported by the World Health Organization. Image used courtesy of the Centers for Disease Control and Prevention.

Another example of 3D-printing being used to help stop the spread of COVID-19 comes from a company 3D-printing hands-free door openers. The company, Materialise NV, specializes in 3D printing applications designed to benefit a variety of industries, including the medical industry.

The company's 3D-printed door opener is designed for people to open doors using their arm, rather than their hand. This aims to reduce the spread of COVID-19 worldwide.

To tackle the novel coronavirus emergency both in Italy and around the world, the 3D Printing Media Network has just launched an initiative to help healthcare professionals connect with 3D experts in order to foster the sharing of 3D designs that could help in this time of unprecedented global crisis.

Is your company/industry utilizing 3D printing or other innovative technology doing to reduce the spread of COVID-19 worldwide? Comment below and let us know.