Learn how drones operate, the physics of their flight, the hardware that makes them work, possible industry applications, and major considerations for commercial use.

After decades-old R&D efforts, drones have become more reliable and industries are building their platforms to put drones to more commercial use. Today, drones are faster, more accurate, and more stable. Building autonomous capabilities for drones opens a plethora of opportunities for rescue, emergency supplies, and combat operations.

This article explains how drones operate, the physics behind their functioning, the onboard hardware, considerations for commercial applications, and the bottlenecks that hinder their commercial viability.

What is Drone Technology?

A drone is a flying robot that can be moved manually using conventional teleoperation or sensor-based computational driven autonomous navigation. Drones are able to fly using the thrust generated by its four rotors. In this article, a quadcopter design is referred to as drones. They usually have four high-speed brushless motors (hence the name quadcopter) with propellers attached to the rotor shafts. 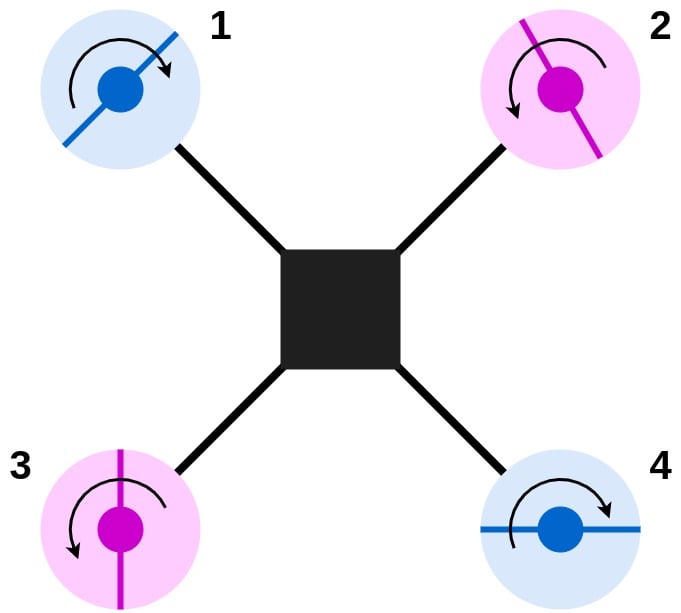 Figure 1. A drone with directions of rotation of the rotors for motion in the vertical direction. The drone may hover/climb up/climb down depending on the force of gravity.

The thrust generated by the propellers is given by:

where T( N) is the thrust generated, D (m) is the diameter of the propeller,

(m/s) is the velocity of air accelerated by the propeller.

The thrust generated is vertically opposite to the direction of gravity and thus, the drone’s height can only ascend or descend in place unless it has a component of generated thrust in other directions as well. One set of diametrically opposite rotors rotates clockwise, while the other set rotates counter-clockwise. If they have the same rotational speeds, both sets cancel out the reactive yaw generated, and thus, the drone can only translate. By varying the speed of rotation of the propellers, the drone’s pitch and roll can be controlled.

Note: To move ahead in a particular direction, the drone needs to have its nose down such that the thrust has a component in the horizontal plane. 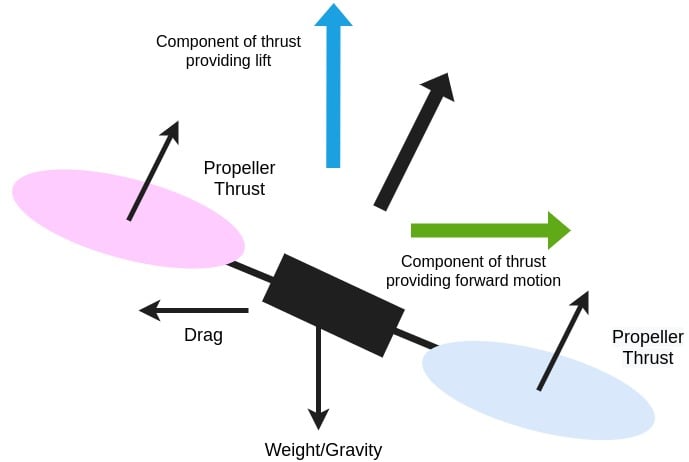 A drone’s motion is governed by the intensity of the rotation of its propellers and how the components of their generated thrust act against gravity as well as in the horizontal plane. 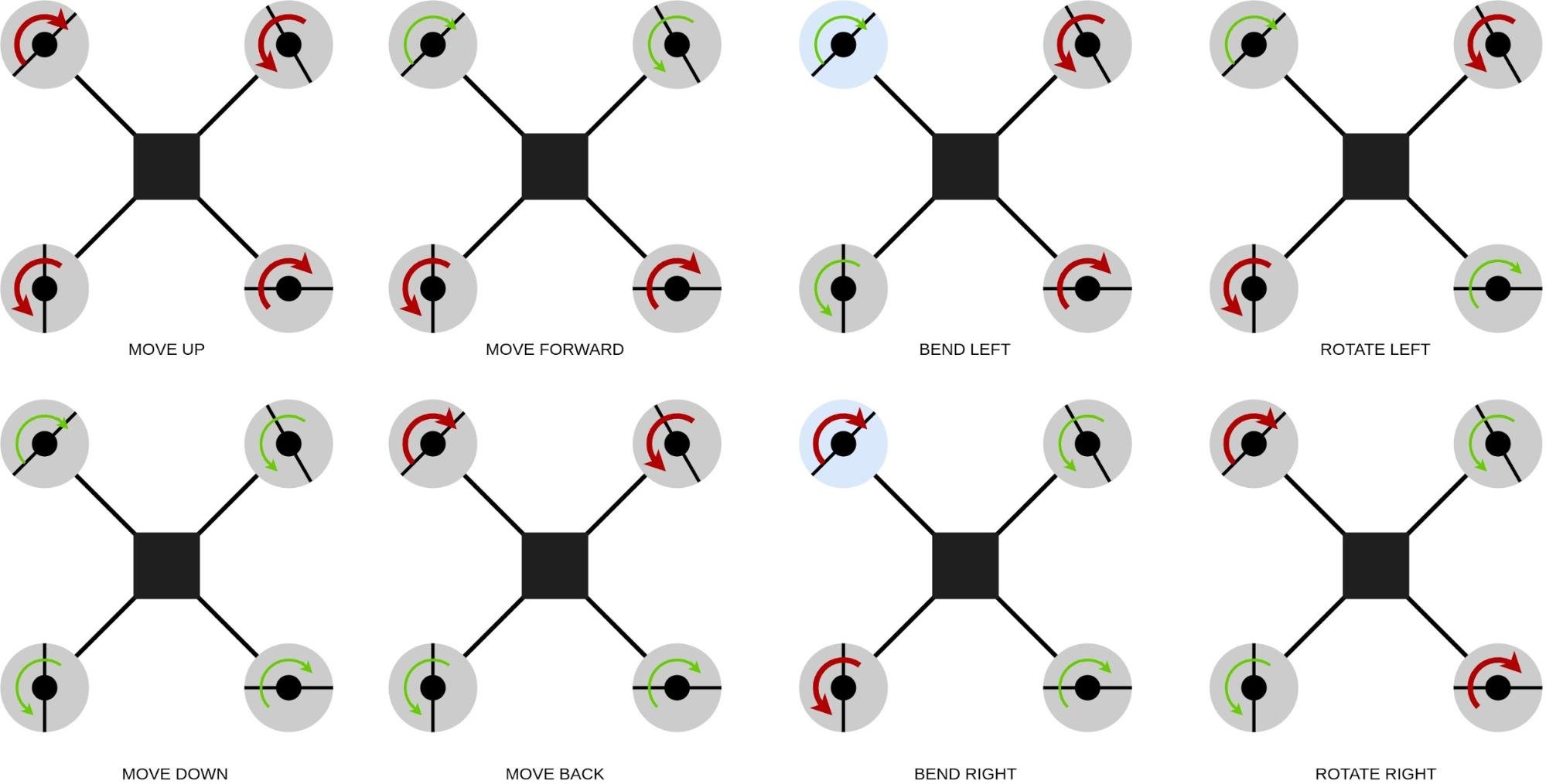 The scenarios for drone motion are:

Since drones generate a lot of thrust to battle strong winds, air resistance, and particles in the air, they need a strong body. They also need to absorb vibrations while being lightweight to reduce the load the drone body needs to lift against the gravitational force. Lightweight drones are also more agile and can react faster due to less inertia.

Figure 4. Side view of a drone

Most commercial drones have a lightweight carbon fiber body with a honeycomb design for the limbs that hold the rotors. The brushless motors on these drones can rotate at more than 10000 RPM and generate enough thrust to lift up the body weight. The embedded control unit, usually a microcontroller with multiple sensors, is mounted on top of the drone while the battery is placed below the controller. The battery is usually the drone’s heaviest component.

What Electronics Are in a Drone?

The most important components on a drone include a microcontroller board that runs the computations for the control of the motors, the motor speed control components, sensors for various measurements, and the drone’s lifeline, the battery.

A flight controller for a drone is a common microcontroller, but usually with high processing speed and a bare minimum of sensors onboard, needed for stabilizations. The most common commercially available flight controllers for drones are PixHawk 4, Navio2, and Beaglebone Blue capable of running the ArduPilot and PX4 autopilot software.

A 3D gyroscope is usually needed to at least have the ability to automatically stabilize the drone on a horizontal plane.

The sensor suite of a drone can include:

A drone also needs communication with the ground station, satellites, and networking. These components include:

The most critical component, the battery, is usually a high current source with different voltage ratings from 7.4V to ~22V depending on the type of motor used.

Drones can move around in the 3D world using four propellers and the motion characteristics defined above are used to control their motions. The most important algorithms running on drones include control and perception algorithms.

The control algorithms determine the rotational speed of the propellers that guide the drone to a particular position in a 3D space. A commonly used PID controller is a linear, model-free algorithm with reference thrust equal to the desired thrust for throttle, roll, pitch, and yaw. Adaptive control handles unprecedented winds and atmospheric objects that can potentially trouble the drone’s motion.

The perception algorithms process the sensors, the accelerometer, gyroscope, and magnetometer to determine the motion characteristics for the drone. Kalman filter and its variants are used to filter these sensor readings for stable results. A few image processing algorithms may also be running on the live camera feed for real time analysis, either onboard the drone or via cloud computing.

A  drone is similar to a terrestrial mobile robot but with more degrees of freedom such that motion is possible anywhere in the 3D space. Autonomous drone navigation is an emerging technological advancement that many companies are working on in an effort to eradicate the need for teleoperation of the drone from one point to another.

Similar to commercial airplanes, autonomous drones flying in 3D space face less stringent challenges because, at heights above 1000 feet, space is not usually occupied with dynamic objects and can be assumed to be free for motion. However, they still need intelligent sensing near the ground level because more obstacles and dynamic objects are expected in the air at low altitudes. Autonomous drones run localization, motion planning, mapping, and control algorithms similar to a mobile robot, as discussed in the previous article on mapping and localization.

However, 3D navigation introduces its own variables in the system. For drones, 3D localization has more tolerance for inaccuracies due to noise in onboard sensors, consumer GPS’s lower accuracy, and air turbulence. Occupancy grids are ideal for 3D mapping but drones navigating autonomously don’t need a large occupancy grid. They only need a 3D environmental map in the proximity of humans or anthropomorphic elements rather than a high compute resource onboard. Motion planning for drones needs simple search algorithms like A* or Djikstra that can navigate along the streets or, even simpler, fly directly from one GPS coordinate to another following a projectile path.

Autonomous drone navigation has applications for package delivery, visual surveying, landmass mapping, fires/power line inspection, and even disinfectant spraying in the times of COVID-19. Visual surveying and landmass mapping can be programmed tasks that drones can complete autonomously without needing human monitoring or intervention.

Package delivery for medicine, lifesaving drugs, and blood payloads is ideal for autonomous operation. Similarly, spraying of insecticides, pesticides, and fertilizers in farms is being automated with drones.

Airplanes can operate on auto-pilot because they have amazingly robust and efficient systems. Replicating the same capabilities for drones is both difficult to implement and extremely expensive from a commercial perspective. More challenges like these limit the feasibility of autonomous drone operation:

Do Autonomous Drones Have A Future in Industrial Applications?

While autonomous drones are exciting and potential lifesavers for many critical situations, like the emergency package delivery that Zipline provides, limitations in the operational range and lack of robustness are critical bottlenecks limiting the commercial scalability and revenue generation. With enhancements in edge computing and control algorithms, robust control of autonomous drones is very possible.

Even if the technology matures with time, a lot of regulations and infrastructure needs to be developed to ensure large scale commercial viability of autonomous drones.