Moisture inside industrial pneumatic systems is a major cause for concern, and if the air is not filtered or dried properly, it can lead to serious failures.

Moisture inside these pneumatic systems is a major concern, and if not treated properly, it can lead to serious failures.

The elements most commonly found in pneumatic systems include the following: 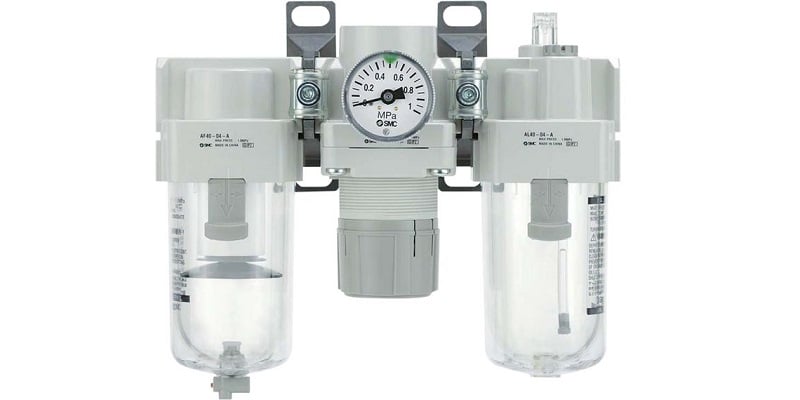 Fundamentally, compressed air is the driving force for pneumatic systems. One of the most challenging aspects of operating such systems is regulating moisture content. Air always contains some water in its vapor form. It is represented by humidity, the amount of water present in a given volume of air before it begins condensing into its liquid form. Since pneumatic systems depend on air, water inevitability finds its way into every system.

The amount of water vapor the air can hold depends on the temperature and the pressure at which air is held. As the temperature increases, air will be able to hold more moisture. Compressed air used in pneumatic systems has a pressure many times greater than atmospheric pressure. This pressurized air is held in tanks that are subject to regular atmospheric heating and cooling. When the air cools, the vapor can no longer be contained in gas form. This leads to condensation in the air compression system - liquid water. This condensation can also be pulled into the rest of the pneumatic system during operation.

Gas (air) in motion also has a lower temperature, according to the Bernoulli effect. The higher the velocity, the lower the pressure, and the temperature decreases along with it. Not only can this further condense the vapor into liquid water, but it may also cause some water to freeze into ice crystals, even if the ambient temperature is above freezing. Ice can damage sensitive components even beyond the harmful effects of liquid water.

Compressed air moisture is measured in pressure dew point (PDP). It is the temperature that the air at atmospheric pressure would have to be at, to achieve the same amount of dryness. The desired PDP for pneumatic systems is -40˚F.

The primary problem caused by moisture is corrosion. Corrosion is the chemical reaction between metal, water, and oxygen. The tanks used to store compressed air are mostly metal. This is the perfect environment for corrosion. In the process of corrosion, metal atoms are oxidized then the water transports the oxidized metal away from the surface, leading to deeper rust cavities. For compressed air systems, the presence of moisture will cause corrosion in air compressor motors, tanks, fittings, and valves. It can also corrode electrical and electronic components associated with the pneumatic system. Water can also pick up other contaminants such as oil and dirt, which clogs various components of pneumatic systems. 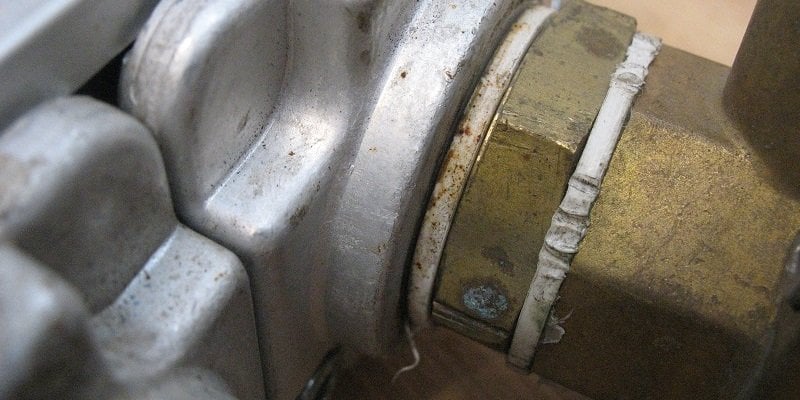 Figure 2. Corrosion can occur externally (exposure to outside air) or internally from moisture inside the air system.

Another challenge with moisture in pneumatic systems is hydraulic shock. It is a pressure surge in fluid when there is a rapid change in momentum. The phenomenon is also called water hammer. When pneumatic systems contain excess water, water hammer becomes a common occurrence. This can cause erosion in pipes through which the fluid travels. Water hammer causes damage to pipes, valves, and other fittings. Sometimes the effect of hydraulic shock can be quite drastic and cause pipes to burst.

Water in compressed air can cause faulty instrumentation. Water blocks control lines and prevents proper actuation of instruments. Cold temperature, or the velocity of air in motion, can lead to ice formation in the system, blocking filters, intakes, and drain valves. Water expands when it freezes to form ice, which in turn can crack pipes and other system components. Ice also causes abrasion to sensitive seals and increases friction losses inside tubes.

Preventing or removing moisture entirely is an impossible task. But there are absolutely steps that can be taken to reduce moisture. The major ways to remove water and moisture from pneumatic systems are discussed in the following sections.

The air compressor inlet may be outfitted with a filter to block moisture from entering the system in the first place. Sometimes, a small room or enclosure can be built around the compressor inlet with filtered openings. However, too much filtration may block the incoming airflow.

Compressor tanks have drain valves to let out condensed water in them. Drain the compressor tank at regular intervals when the system is de-pressurized to release the contaminating water. The drain valves are generally present at the bottom of the tank. It releases the water and oil mixture that gets accumulated at the bottom of the compressed air tank, usually where the corrosion problem is at its worst. 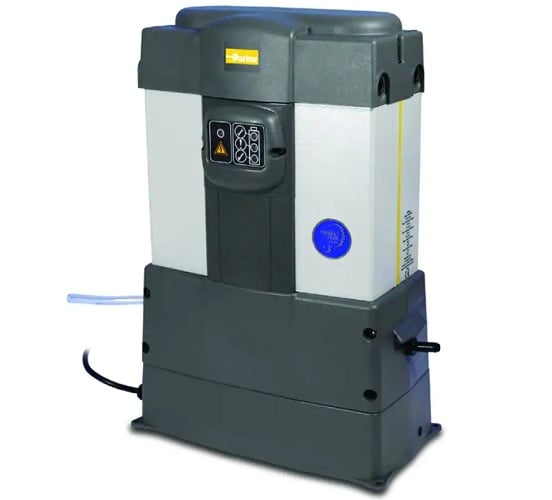 Materials capable of absorbing moisture from the air are used to dry compressed air. Absorption drying is also called desiccant drying as desiccant beads are usually used for drying. A desiccant is a hygroscopic substance that helps to maintain dryness in an area. The most commonly used desiccant substances are silica gel and activated alumina.

The compressed air is cooled in a heat exchanger, typically between 35˚F to 50˚F. Here, the moisture gets condensed to form a high-pressure liquid. This water gets separated from the air. Air devoid of water is warmed and sent back into circulation for its end-use purposes.

It is the simplest method to remove moisture from incoming air. Incoming cool air with moisture circulates around a bowl. The centrifugal force separates the water from the air. The separated water is collected at the bottom of the trap and eventually drained out. The air separated from the water is also passed through a filter to remove other undesirable material.

Water present in the air in the form of moisture always finds its way into pneumatic systems. This causes damage to the system as corrosion and various other damages to the compression system, and can significantly affect performance. It is impossible to completely eliminate moisture from the air, but various methods can be adopted to reduce the humidity to such a degree that the performance of the pneumatic system is not hampered. Removing moisture from air also ensures longevity of pneumatic systems as they will be less susceptible to damage from corrosion.