Data-processing modules within FF systems are known as function blocks. Sometimes these blocks serve merely to catalogue data, while in other instances the blocks execute specific algorithms useful for process measurement and control. These “blocks” are not physical entities, but rather abstract software objects – they exist only as bits of data and instructions in computer memory. However, the blocks are represented on FF computer configuration displays as rectangular objects with input ports on the left-hand side and output ports on the right-hand side. The construction of a working control system comprised of FF devices consists of linking the outputs of certain function blocks with the inputs of other function blocks via configuration software and computer-based tools. This usually takes the form of using a computer to draw connecting lines between the output and input ports of different function blocks.

Function-block programming in general strongly resembles the design philosophy of legacy analog-based computer systems, where specific functions (addition, subtraction, multiplication, ratio, time-integration, limiting, and others) were encapsulated in discrete operational amplifier circuits, and whole systems were built by connecting function blocks together in whatever patterns were desired to achieve a design goal. Here with Fieldbus programming, the function blocks are virtual (bits and data structures in digital memory) rather than real analog circuits, and the connections between blocks are merely pointer assignments in digital memory rather than actual “patch cable” connections between circuit boards.

An example contrasting analog circuit design with Fieldbus function-block design appears here, both systems selecting the greatest temperature signal to be the output. The system on the left-hand side receives analog voltage signals from three temperature sensors, using a network of operational amplifiers, diodes, and resistors to select the greatest voltage signal to be the output. The system on the right-hand side uses three Fieldbus transmitters to sense temperature, the greatest temperature signal selected by an algorithm (the ISEL function block) running in a Fieldbus device. The device running the ISEL function could be one of the three FF temperature transmitters, or another device on the segment:

There is usually some freedom of choice in where various function blocks may be located in a FF segment. Take for example the following flow control loop, where a flow transmitter feeds measured flow data into a PID control function block, which then drives a control valve to whatever position necessary to regulate flow. The actual physical device layout might look something like this: 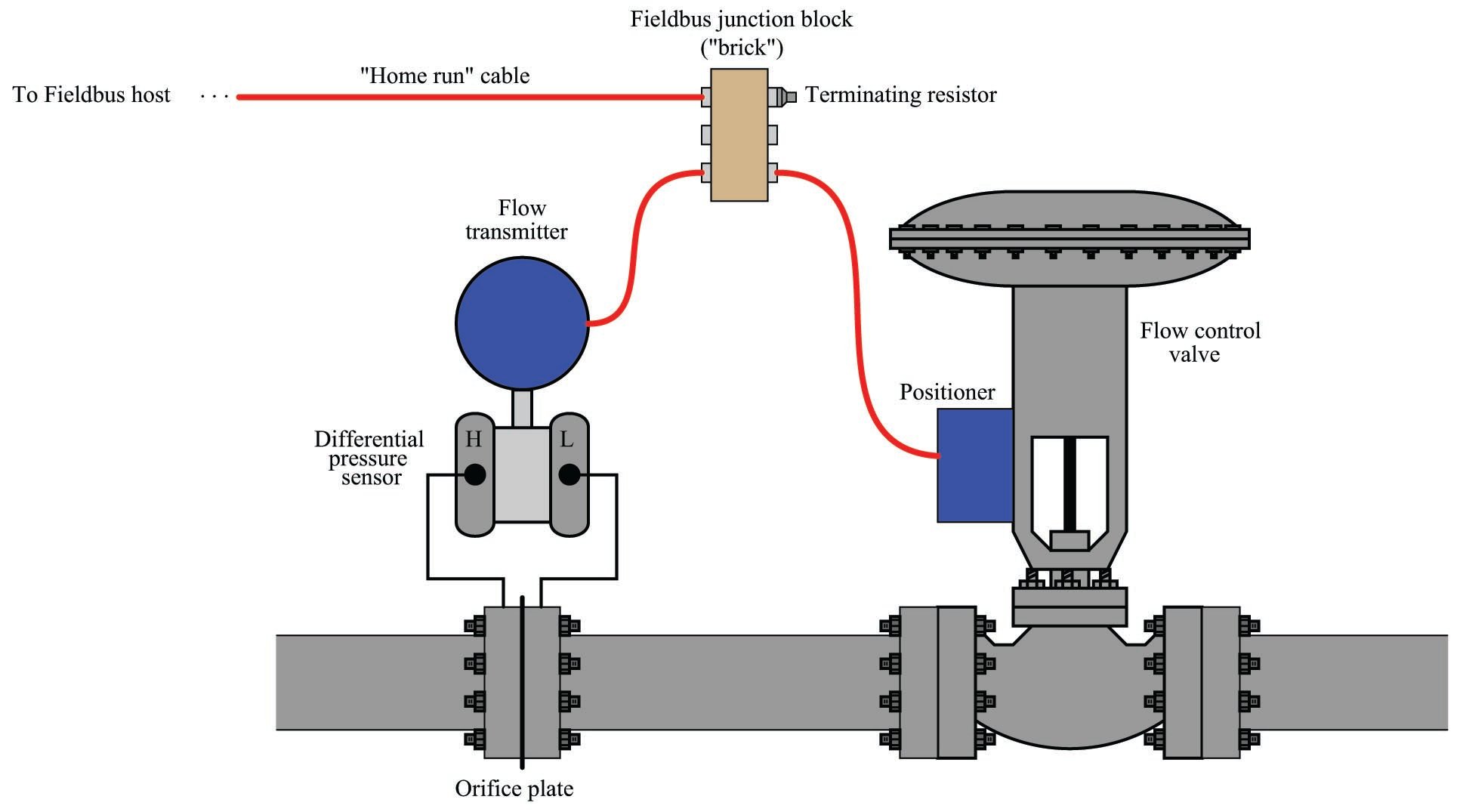 It should be obvious that the analog input (AI) block must reside in the transmitter, simply because only the transmitter is able to measure the process fluid flow rate. Likewise, it should be obvious that the analog output (AO) block must reside in the control valve positioner, simply because the valve is the only device capable of manipulating (exerting influence over) anything. However, given the lack of a separate controller device, the person configuring the Fieldbus loop may choose to locate the PID block in either the transmitter or the control valve positioner. So long as both the FF transmitter and the FF valve positioner possess PID function block capability, it is possible to locate the PID function block in either device.

The following illustrations show the two possible locations of the PID function block in this system: 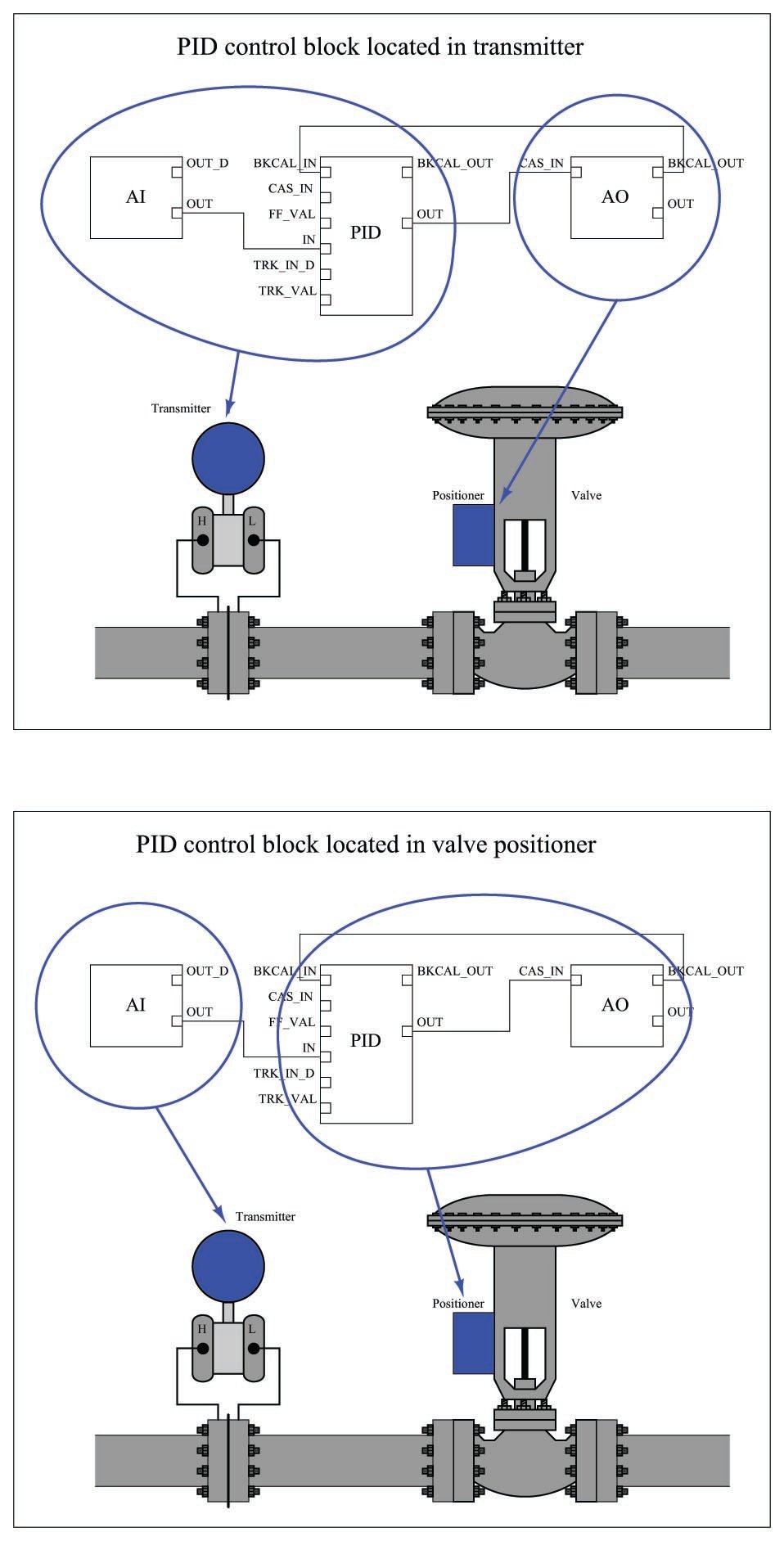 Note the two scheduled communication events (CD tokens and responses) necessary in the macrocycle schedule to enable communication between pressure transmitter PT_501’s PID function block and valve positioner PV_501’s analog output function block. The first CD token in this macrocycle schedule compels the PID block to publish its “output” signal (subscribed to by the analog output block), while the second token compels the analog output block to publish its “back calculation” signal (subscribed to by the PID block). The amount of time required for function block execution and their publisher/subscriber communications is 330 milliseconds, with a total macrocycle time of 1 second.

The FF standard specifies many different function blocks for the construction of control algorithms. Ten of them are considered “basic” FF function blocks:

The primary benefit of standardization is that the end-user may choose FF instruments manufactured by any standard-compliant vendor, and those function blocks should behave the same as the equivalent function blocks within any other manufacturer’s model of FF device. There are, of course, examples where manufacturers have equipped their FF devices with “extended” capability function blocks going beyond the Fieldbus Foundation standard, and the user must beware of this.

In addition to the function blocks necessary to construct control schemes, all FF instruments contain one Resource block and usually one or more Transducer blocks describing details specific to that instrument. The following computer screenshot shows all function blocks within a Rosemount model 3095MV Fieldbus transmitter:

As mentioned earlier, function block programming bears a strong resemblance to analog function-block circuit design, where specific tasks are divided up into discrete elements, those elements connected together to form a larger system with more complex functionality. One of the important distinctions between legacy analog function block circuit design and FF function block programming is the data content of the lines connecting blocks together. In the analog world, each connecting line (wire) carries exactly one piece of information: a single variable represented in analog form by a voltage signal. In the world of Fieldbus, each connecting line carries not only the variable’s numerical value, but also a status and in some cases an engineering unit (a unit of measurement). For example, a Fieldbus transmitter sensing temperature might output a digital process variable (PV) signal of “342 degrees Celsius, Good”, whereas a temperature transmitter with an analog (e.g. 4-20 mA) output is merely able to send a signal representing the temperature (no measurement unit or status information).

The inclusion of status along with data is a powerful concept, with roots in scientific practice. Scientists, as a rule, do their best to report the degree of confidence associated with the data they publish from experiments. Data is important, of course, but so is the degree of certainty with which that data was obtained. Obviously, data gathered with instruments of low quality (high uncertainty) will have different significance than data gathered with instruments of high precision and impeccable accuracy (low uncertainty). Any scientist basing research on a set of scientific data published by another scientist will have access to the data’s certainty in addition to the data itself – a very valuable detail.

By the same token, data “published” by a FF device is only as good as the health of that device. A FF transmitter exhibiting noisy or wildly fluctuating measurements might very well be nearing complete failure, and therefore its published data should be treated with skepticism. Since FF devices are “smart” (meaning, among other things, they have self-diagnostic capability), they have the ability to flag their own data as “Bad” if an internal fault is detected. The data still gets published and sent to other FF function blocks, but the status sent along with that data warns all downstream blocks of its uncertainty.

The three major status conditions associated with every FF signal passed between function blocks are Good, Bad, and Uncertain. Sub-status states also exist to further delineate the nature of the uncertainty. “Sensor Failure” is an example of a sub-status value, describing the reason for a “Bad” status value from a process transmitter.

In computer science, there is a truism that “Garbage In equals Garbage Out,” sometimes abbreviated as GIGO. No algorithm, no matter how advanced, can guarantee an output of good data from an input of bad data. This principle finds intelligent application in FF function block programming, as the blocks are programmed to switch mode when “Bad” or “Uncertain” input statuses are detected. For example, here are some of the possible actions a function block may be configured to take upon detection of a “Bad” input signal status:

Furthermore, status values are propagated in a FF system from the input to the output of every function block connected in series, reflecting the effect of an input signal’s uncertainty throughout the entire control loop. For example, an analog input (AI) block sending a “Bad” status signal to the process variable input of a PID control block will have its “Bad” status propagated to the output of the PID block as well. When that “Bad” PID output signal reaches the analog output (AO) function block, that final block knows the signal is not to be trusted, because its origin (the AI block) is untrustworthy. Any function blocks receiving the PID block’s output signal will likewise sense the “Bad” status and further propagate that status to their output signal(s). This “status propagation” ensures all function blocks in a Fieldbus control system are “aware” of the input data status, so that a “Bad” measurement does not result in “bad” control decisions made on that data.

Instrumentation technicians and professionals are already familiar with the concept of a controller having “Automatic,” “Manual,” and even “Cascade” operating modes, but Fieldbus function block programming extends this general concept to each and every function block. With FF, each block may be independently set into “Automatic” or “Manual” mode, which is a useful tool for testing FF algorithms and troubleshooting complex FF control schemes. The “Out of Service” mode, for instance, is commonly set when performing routine maintenance on an FF device (e.g. checking the calibration of an FF transmitter).

A block’s “Target” mode is the mode it strives to be in if possible. The “Actual” mode is the mode the block is in at the present time. “Permitted” modes list all the different modes which may be used as “target” modes. “Normal” is a category describing to an operator interface what a block’s normal operation mode should be, but the block itself does not heed this setting.