Feedback obtained from industrial users of FF reveal a common pattern: Fieldbus is a powerful and reliable technology, but only if it is properly installed. Poor installations, usually driven by a desire to minimize capital expenses, will cause numerous problems during commissioning and operation.

The last resistance check shown in the table checks for the presence of ground connections in the shield conductor other than the one ground connection at the host end (which has been disconnected for the purposes of the test). Since the shield should only be grounded at one point (to avoid ground loops), and this one point has been disconnected, the shield conductor should register no continuity with earth ground during the test.

FF, like all digital networks, are unaffected by noise voltage below a certain threshold. If noise voltage is present in excessive quantity, though, it may cause bits to be misinterpreted, causing data errors. The Fieldbus Foundation gives the following recommendations for noise voltage levels on a FF segment:

Fieldbus diagnostic tools measure noise on the network segment during times between message frames, when there should be purely DC voltage between the two conductors.

Using an oscilloscope on H1 segments

A tool available in most instrument shops is a digital-storage oscilloscope, which may be used to measure and display FF H1 signal waveforms for analysis of problems. Analog oscilloscopes are also useful for network troubleshooting, but to a lesser degree.

When using an oscilloscope to measure FF H1 signals, it is very important not to connect either of the FF segment conductors to earth ground through the oscilloscope. Introducing such a “ground fault” to the network segment will almost certainly cause communication problems, in addition to whatever problems already exist that compel you to diagnose with an oscilloscope. If a single channel of the oscilloscope is connected across the segment wires, the “ground” clip of the probe will force one of those conductors to earth ground potential via the metal chassis of the oscilloscope which is grounded through the third prong of the power plug for safety. An exception to this rule is if the oscilloscope itself is battery-powered and has an insulated case where no ground connection is made through the surface it sits on or the human hand that holds it. Otherwise, using a single channel on a line-powered oscilloscope to measure network signals is inviting trouble. 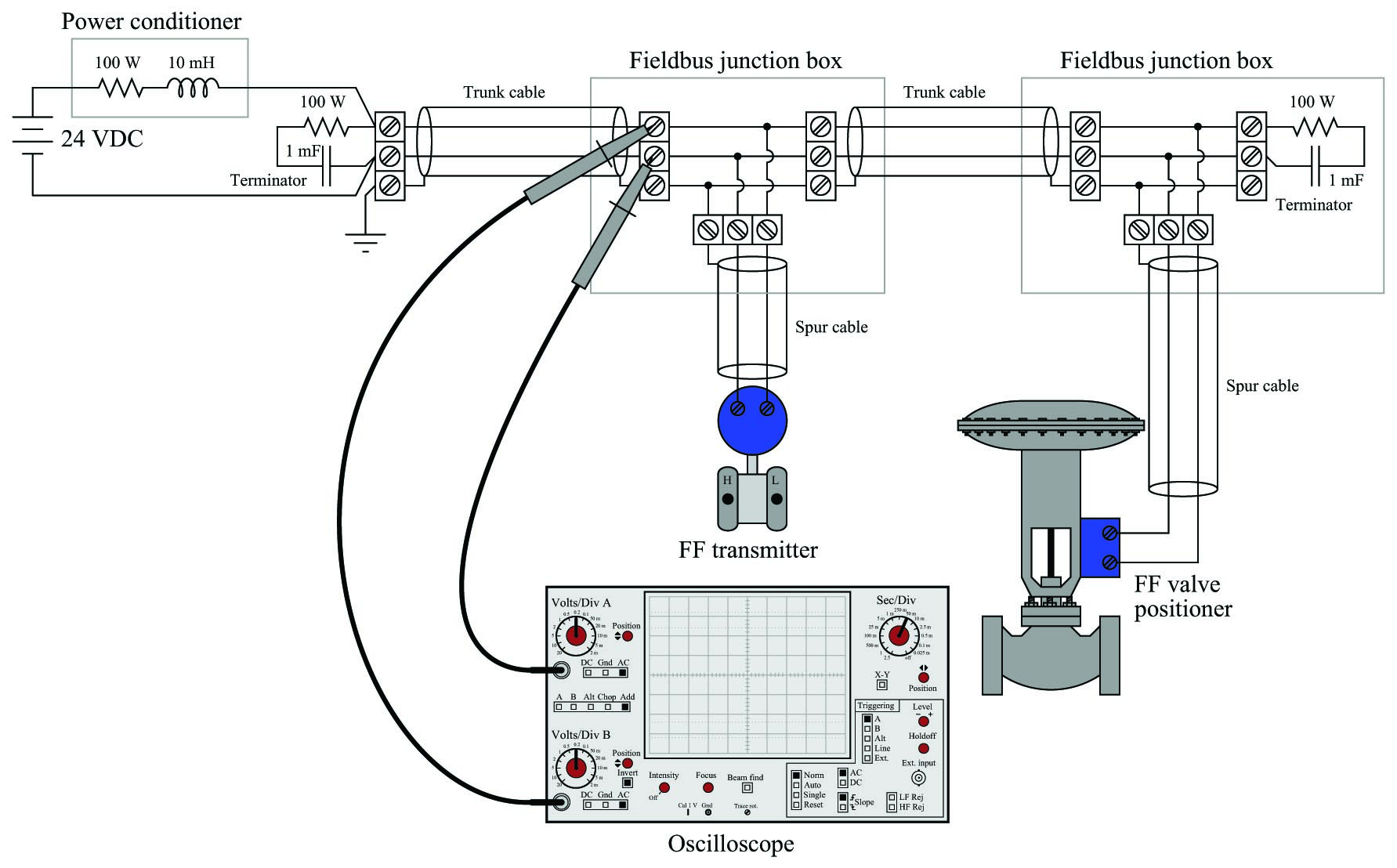 Configuring a dual-trace oscilloscope for differential mode is quite simple. On the front panel of the oscilloscope, you must set the multi-trace controls to the Add mode, where one trace on the screen represents the instantaneous sum of the two inputs (channels “A” and “B”). The volts per division “sensitivity” of both channels should be set to exactly the same value. Also, the Invert control must be engaged for the second input channel, forcing that channel’s signal to be inverted (register upside-down on the screen). The summation of channel “A” and an inverted channel “B” is equivalent to the mathematical difference (subtraction) between “A” and “B,” which means the single trace on the screen now represents the difference of potential between the two probe tips. The oscilloscope now behaves as an ungrounded voltmeter, where neither of the test leads is referenced to earth ground.

Aside from voltage parameters (signal strength, noise amplitude), another good indicator of FF segment health is the number of message re-transmissions over time. Certain types of communication on an H1 segment require verification of a received signal (particularly client/server VCRs such as those used to communicate operator setpoint changes and diagnostic messages). If the signal received by the client FF device appears corrupted, the device will request a re-transmission of the message from the server device. Re-transmission events, therefore, are an indication of how often messages are getting corrupted, which is a direct function of signal integrity in a Fieldbus segment.

Most host systems provide re-transmission statistics in much the same way that computers communicating via TCP/IP protocol have the ability to display the number of “lost” data packets over time. Since nearly all FF segments function with a host system connected, this becomes a built-in diagnostic tool for technicians to troubleshoot FF network segments.

Hand-held diagnostic tools are also manufactured to detect signal voltage levels, noise voltage levels, and message re-transmissions. Relcom manufactures both the model FBT-3 and model FBT-6 hand-held Fieldbus testers at the time of this writing (2009), the FBT-6 being the more capable of the two test devices.