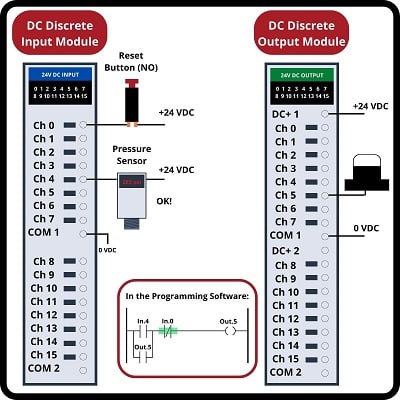 Although it seems each model of PLC has its own idiosyncratic standard for programming, there does exist an international standard for controller programming that most PLC manufacturers at least attempt to conform to. This is the IEC 61131-3 standard, which will be the standard presented in this chapter.

One should take solace in the fact that despite differences in the details of PLC programming from one manufacturer to another and from one model to another, the basic principles are largely the same. There exist much greater disparities between different general-purpose programming languages (e.g. C/C++, BASIC, FORTRAN, Pascal, Java, Ada, etc.) than between the programming languages supported by different PLCs, and this fact does not prevent computer programmers from being “multilingual.” I have personally written and/or analyzed programs for over a half-dozen different manufacturers of PLCs (Allen-Bradley, Siemens, Square D, Koyo, Fanuc, Moore Products APACS and QUADLOG, and Modicon), with multiple PLC models within most of those brands, and I can tell you the differences in programming conventions are largely insignificant. After learning how to program one model of PLC, it is quite easy to adapt to programming other makes and models of PLC. If you are learning to program a particular PLC that does not exactly conform to the IEC 61131-3 standard, you will still be able to apply every single principle discussed in this chapter – the fundamental concepts are truly that universal.

Not all programmable logic controllers support all five language types, but nearly all of them support the Ladder Diagram (LD), which will be the primary focus of this book.

Perhaps the most important yet elusive concept to grasp when learning to program PLCs is the relationship between the electrical status of the PLC’s I/O points and the status of variables and other “elements” in its programming. This is especially true for Ladder Diagram (LD) programming, where the program itself resembles an electrical diagram. Making the mental connection between the “real” world of the switches, contactors, and other electrical devices connected to the PLC and the “imaginary” world of the PLC’s program consisting of virtual contacts and relay “coils” is most fundamental.

Another rule to remember when examining a Ladder Diagram PLC program is that the programming software offers color highlighting to display the virtual status of each program element: a colored contact is closed, while an un-colored contact is open. While the presence or absence of a “slash” symbol marks the normal status of a contact, its live color highlighting shown by PLC programming software reveals the “conductive” status of the elements in real-time.

The following image shows the two types of contacts in a PLC’s Ladder Diagram program.

The normally open contact will logically conduct, or become 'closed' when the bit status is a 1, as shown below. As mentioned previously, a logically conducting, or 'closed' element is colored in most ladder programs. 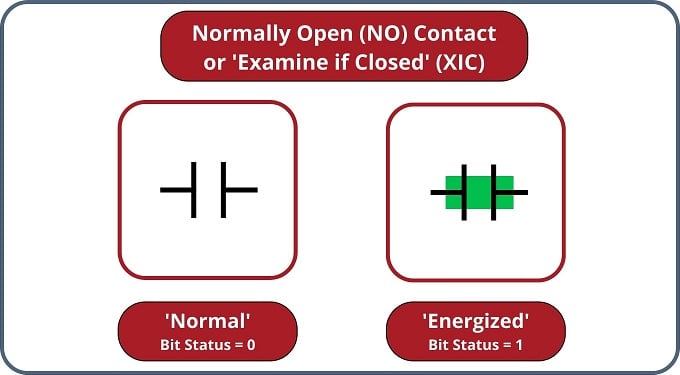 The normally closed contact will logically conduct, or become 'closed' when the bit status is a 0, as shown below. 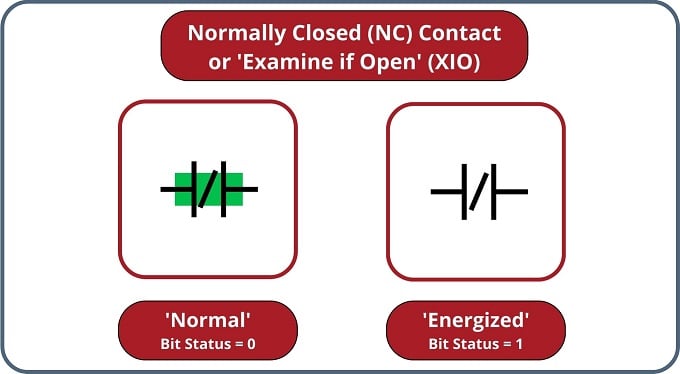 The following simplified illustration shows a small PLC with two of its discrete input channels electrically energized, causing those two bits to have “1” statuses. The color-highlighted contacts in the programming editor software’s display shows a collection of contacts addressed to those input bits in various states (colored = closed; un-colored = open). As you can see, every contact addressed to a “set” bit (1) is in its actuated state, while every contact addressed to a “cleared” bit (0) is in its normal state: 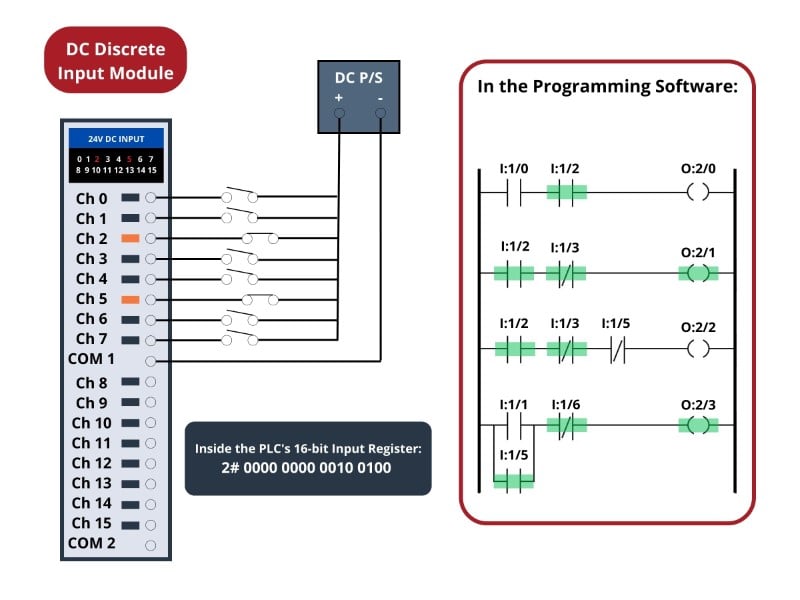 Remember that colored contact is a closed contact. The contacts appearing as colored are either normally-closed contacts with “0” bit states or normally-open contacts with “1” bit states. It is the combination of bit state and contact type (NO vs. NC) that determines whether the virtual contact will be open (un-colored) or closed (colored) at any given time. Correspondingly, it is a combination of colored highlighting and virtual contact type that indicates the real-world energization status of a particular PLC input at any given time.

In my teaching experience, the main problem students have comprehending PLC Ladder Diagram programs is that they over-simplify and try to directly associate real-world switches connected to the PLC with their respective contact instructions inside the PLC program. Students mistakenly think the real-world switch connecting to the PLC and the respective virtual switch contact inside the PLC program are one and the same when this is not the case at all. Rather, the real-world switch sends power to the PLC input, which, in turn, influences the state of the virtual contact(s) programmed into the PLC. Specifically, I see students routinely fall into the following misconceptions:

To clarify, here are the fundamental rules one should keep in mind when interpreting contact instructions in Ladder Diagram PLC programs:

To further illuminate these fundamental concepts, we will examine the operation of a simple PLC system designed to energize a warning beacon in the event that a fluid process line experiences a low pressure. The PLC’s task is to energize a warning lamp if the process vessel pressure ever falls below 270 PSI and keep that warning lamp energized even if the pressure again exceeds the trip point of 270 PSI. This way, operators will be alerted to both past and present process vessel overpressure events.

DC control voltage (+24 and 0 volts) provides electrical energy for the signal potential for the input switches and power for the warning lamp. Two switches connect to the input of this PLC: one normally-open pushbutton switch acting as the alarm reset (pressing this switch “unlatches” the alarm lamp) and one normally-open pressure switch acting as the sensing element for the process pressure: 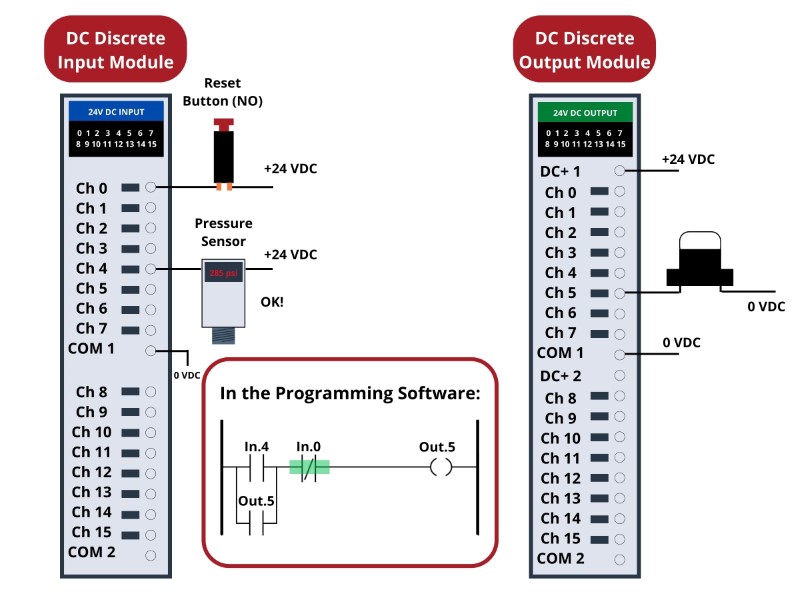 If the process vessel experiences a low pressure (\(<\) 270 PSI), the pressure switch will actuate, closing its normally-open contact. This will energize input channel 4 on the PLC, which will “close” the virtual contact In.4 in the ladder program. This sends virtual power to the virtual “coil” Out.5, which in turn latches itself on through virtual contact Out.5 and also energizes the real discrete output channel 5 to energize the warning lamp: 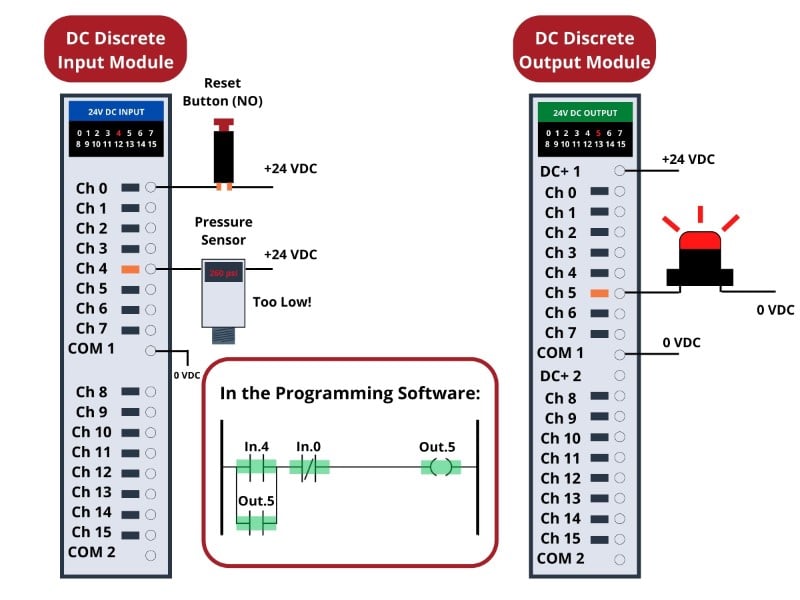 If now the process pressure goes back above below 270 PSI, the pressure switch will return to its normal state (open), thus de-energizing discrete input channel 4 on the PLC. Because of the latching contact Out.5 in the PLC’s program, however, output channel 5 remains on to keep the warning lamp in its energized state: 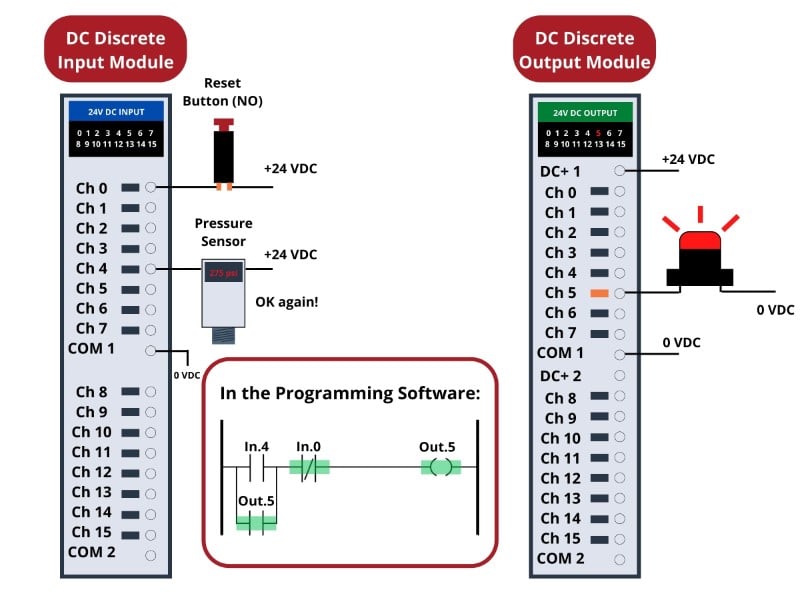 Thus, the Out.5 contact performs a seal-in function to keep the channel 5 output bit set (1) even after the low-pressure condition clears. This is precisely the same concept as the “seal-in” auxiliary contact on a hard-wired motor starter circuit, where the electromechanical contactor keeps itself energized after the “Start” pushbutton switch has been released. 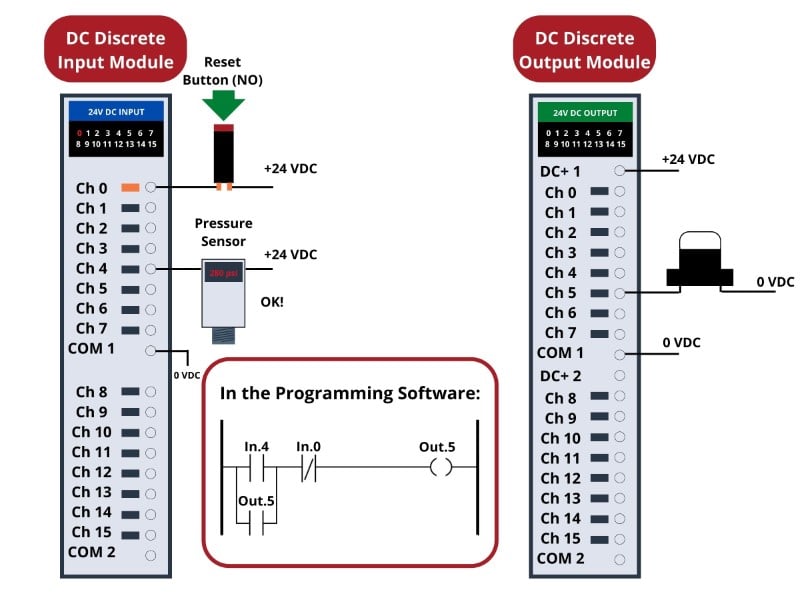