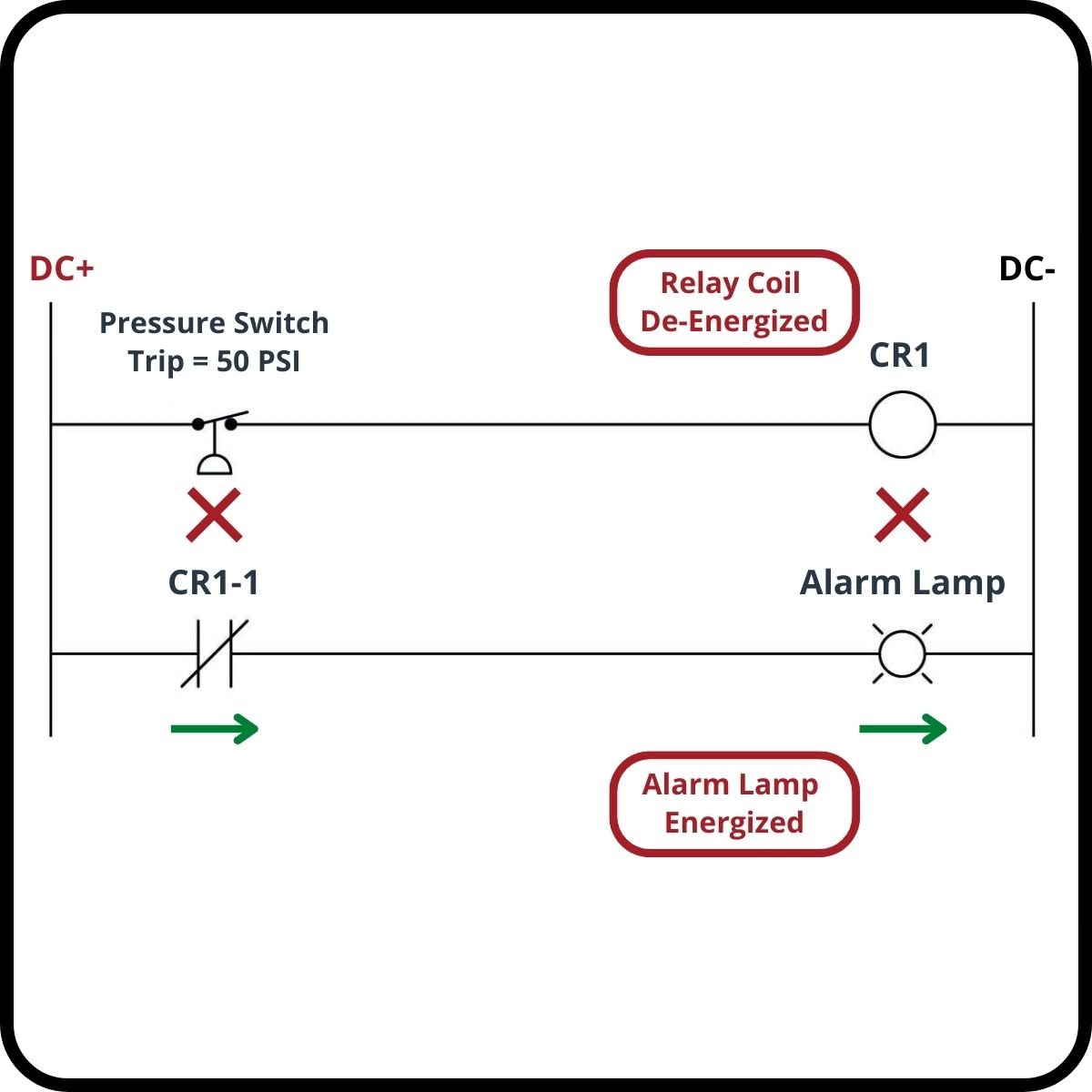 Relay ladder circuits are the precursor to PLC ladder logic. Advanced machines and processes can be controlled by the interconnection of relays acting as logic gates much like a digital logic circuit.

Electromechanical relays may be connected together to perform logic and control functions, acting as logic elements much like digital gates (AND, OR, etc.). A very common form of schematic diagram showing the interconnection of relays to perform these functions is called a ladder diagram. In a “ladder” diagram, the two poles of the power source are drawn as vertical rails of a ladder, with horizontal “rungs” showing the switch contacts, relay contacts, relay coils, and final control elements (lamps, solenoid coils, motors) drawn in between the power rails.

Ladder diagrams differ from regular schematic diagrams of the sort common to electronics technicians primarily in the strict orientation of the wiring: vertical power “rails” and horizontal control “rungs.” Symbols also differ a bit from common electronics notation: relay coils are drawn as circles, with relay contacts drawn in a way resembling capacitors: 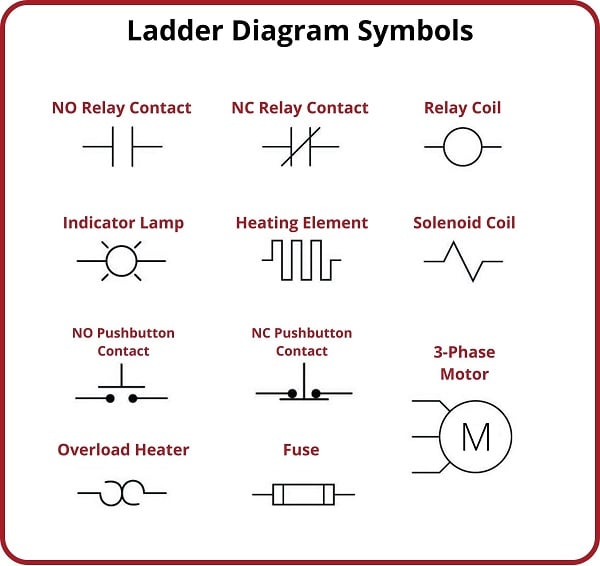 Another notable convention in relay circuits and their ladder diagrams is that each and every wire in the circuit is labeled with a number corresponding to common connection points. That is, wires connected together always bear the same number: the common number designates a condition of electrical commonality (all points bearing the same number are equipotential to each other). Wire numbers only change when the connection passes through a switch or other device capable of dropping voltage.

An actual ladder diagram of a relay-based motor control system is shown here, complete with red-line edits showing modifications to the circuit made by an industrial electrician: 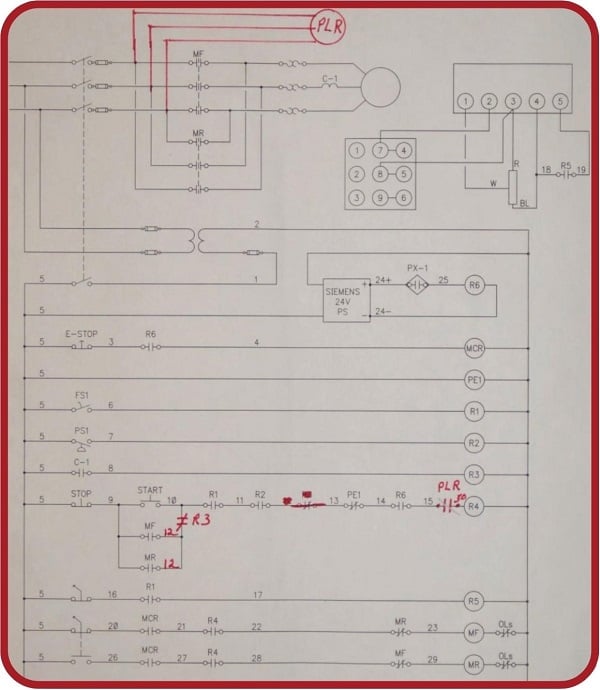 The coil, as well as the contact sets, are numbered carefully on the side of the case according to either IEC or NEMA conventions. Although at first glance, the numbers can be confusing and cause difficulty in wiring, the reality is that the numbers are carefully selected to create consistency and predictability regardless of the size of the relay, as this article about relay terminal numbering explains.

To illustrate this concept, let us examine a relay control circuit where a pressure switch activates an alarm light:

When analyzing the operation of a relay control system, it is helpful to have some way to temporarily denote the conductive status of switch contacts and the energization status of relay coils (i.e. a notation we might sketch using pencil on a diagram to help us follow the operation of the circuit). A symbology I recommend is the use of arrow and “X” symbols to represent power flow and no power flow (respectively). These symbols clearly denote component status while avoiding confusion with the symbols used to denote normal status of switch contacts309.

In this next diagram, we assume the applied pressure is less than 50 PSI, leaving the pressure switch in its “normal” (closed) state: 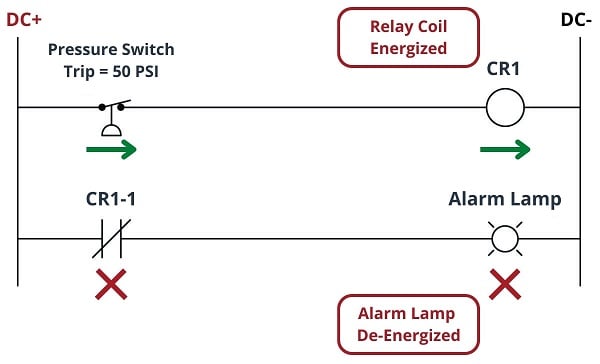 Using arrow and “X” symbols again to represent the presence or absence of power in this circuit, we will now analyze its status with an applied switch pressure greater than 50 PSI: 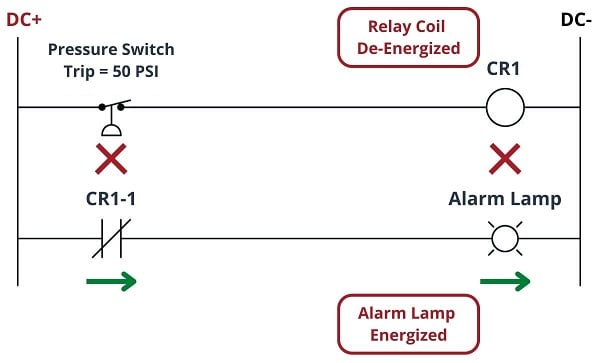 Now that there is sufficient fluid pressure applied to the switch to actuate it, its contact is forced into the actuated state which for this “normally-closed” switch is open. This open condition de-energizes relay coil CR1, allowing relay contact CR1-1 to spring-return to its normal status (closed), thus sending power to the alarm lamp. From this analysis we see that the lamp fulfills the function of a high pressure alarm, energizing when the applied pressure exceeds the trip point.

Where students typically find themselves confused is assuming the switch contact will be in the same state it is drawn in. This is not necessarily true. The way switch contacts are drawn merely reflects their normal status as defined by the switch manufacturer, which means the status of the switch when there is no (or insufficient) actuating stimulus present. Whether or not the switch will actually be in its normal state at any given time is a question of whether or not a sufficient stimulus is present to actuate that switch. Just because a switch is drawn normally-closed does not necessarily mean it will be closed when you go to analyze it. All it means is that the switch will be closed when nothing actuates it.

This exact same principle applies to relay ladder-logic programming in electronic control systems called PLCs (Programmable Logic Controllers). In a PLC, a digital microprocessor performs the logic functions traditionally provided by electromechanical relays, with the programming for this microprocessor taking the form of a relay diagram (also called a “ladder logic” diagram).

Here, we will emulate the exact same high-pressure alarm circuit using a Siemens S7-1200 PLC instead of a relay coil: 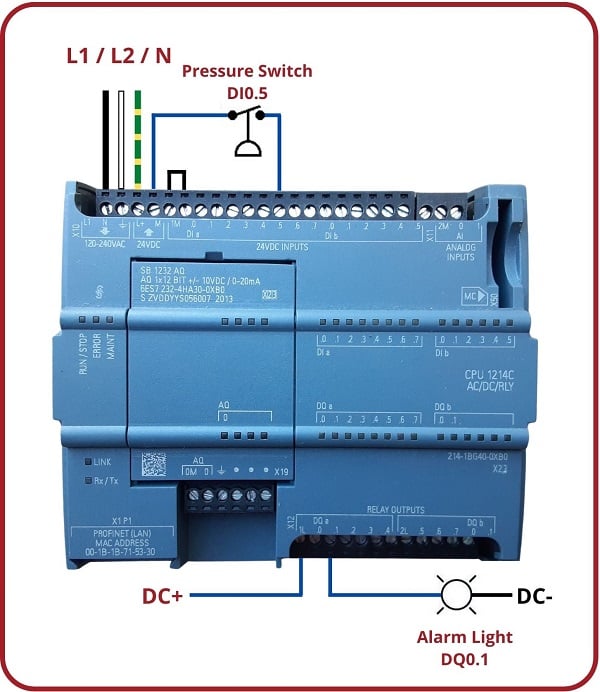 Suppose a fluid pressure of 36 PSI is applied to the pressure switch. This is less than the switch’s trip setting of 50 PSI, leaving the switch in its “normal” (closed) state. This sends power to input I0.5 of the PLC. The contact labeled “Pressure Switch” with address I0.5 drawn in the ladder logic program of the PLC behaves like a regular switch contact driven by a coil energized by input terminal I0.5. Thus, the closure of the pressure switch contact energizes input terminal I0.5, which in turn would highlight the normally-open contact symbol II0.5 drawn in the ladder-logic program.

This “virtual” contact sends virtual power to a virtual coil labeled M1.0, which is nothing more than a single bit of data in the PLC’s microprocessor memory. “Energizing” this virtual coil has the effect of “actuating” any contact drawn in the program bearing the same label. This means the normally-closed contact M1.0 will now be “actuated” and thus in the open state, not sending virtual power to the output coil Q0.1. With virtual coil Q0.1 “unpowered,” the real-life output Q0.1 on the PLC will be electrically open, and the alarm lamp will be unpowered (off).

We may simplify this PLC program further by eliminating the virtual control relay M1.0 and simply having input I0.5 activate output Q0.1 through a “normally-closed” virtual contact:

The effect is the same: the PLC output Q0.1 will activate whenever input I0.5 de-energizes (whenever the pressure switch is opened by a high pressure), turning on the alarm lamp in a high-pressure condition. In a low-pressure condition, the energized input I0.5 forces the virtual normally-closed contact I0.5 to open, thus de-energizing the PLC’s output Q0.1 and turning the alarm lamp off.

Programmable Logic Controllers have not only greatly simplified the wiring of industrial logic controls by replacing multitudes of electromechanical relays with a microprocessor, but they have also added advanced capabilities such as counters, timers, sequencers, mathematical functions, communications, and of course the ability to easily modify the control logic through programming rather than by re-wiring relays. The beauty of ladder-logic programming is that it translates the technician’s understanding of traditional relay control circuits into a virtual form where contacts and coils interact to perform practical control functions. A key concept to master, however, is the association of real-life conditions to switch status based on the “normal” representation of those switch contacts, whether the switches be real (relay) or virtual (PLC). Once this vital concept is mastered, both hard-wired relay control circuits and PLC programs become possible to understand. Without mastering this vital concept, neither relay control circuits nor PLC programs may be understood.