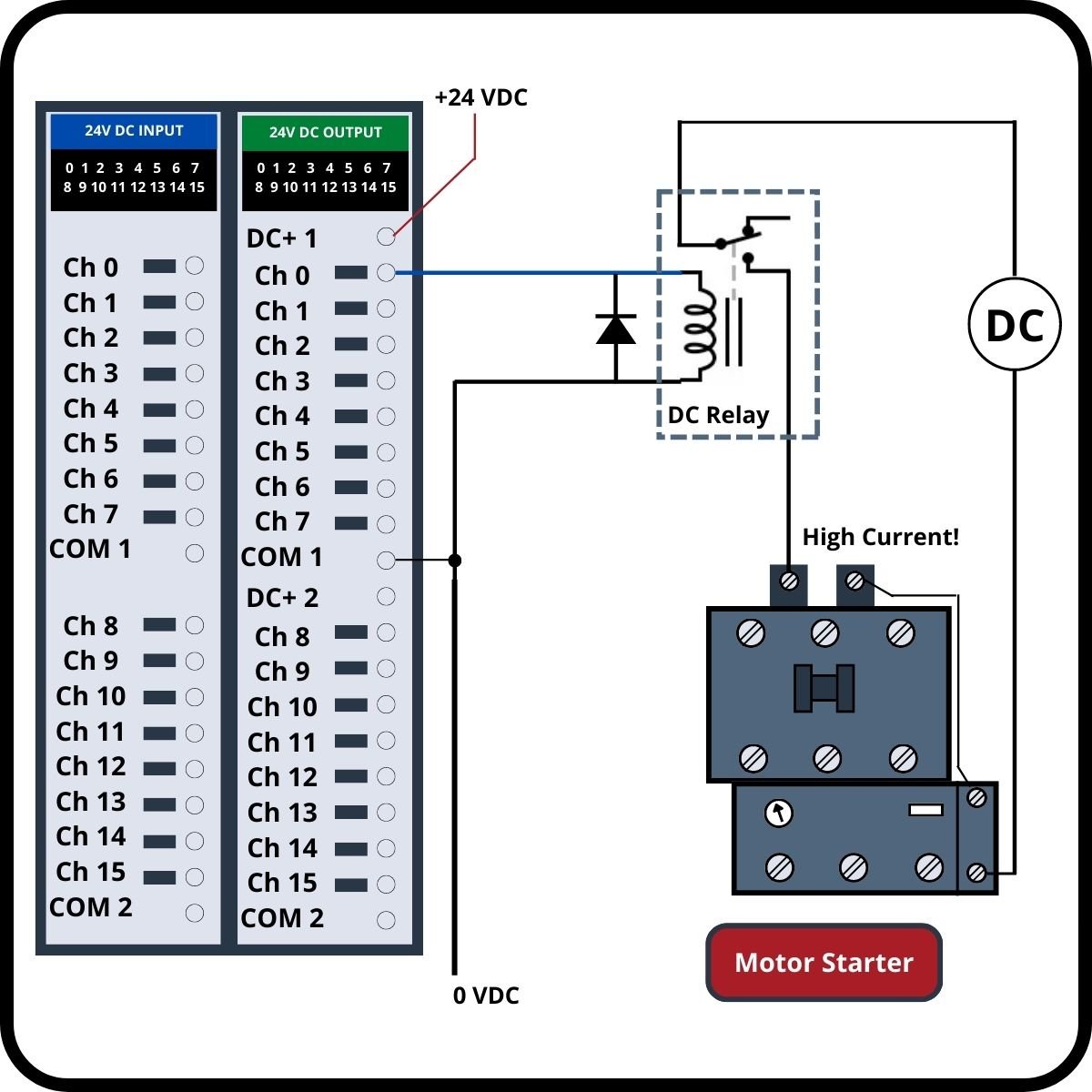 Relays have a distinct advantage over many solid-state devices in providing isolation between circuits. Different voltage and current can be ‘interposed’ to provide safety, efficiency, and compatibility between systems.

In addition to directly performing logic functions, electromechanical relays may also be used as interposing devices between mismatched sensors, controllers, and/or control devices. A very simple example of a relay used to interpose between mismatched devices is shown in the following circuit diagram, where a delicate toggle switch is used to control a bank of high-power lights for an off-road vehicle:

In this circuit, the relay performs no logic function whatsoever. Rather, it merely “amplifies” the signal sent by the dashboard toggle switch to send or halt power to the bank of high-power lights. Without the relay, a much heavier-duty toggle switch would have to be installed in the dashboard of this vehicle to safely and reliably make and break the light circuit.

Another example of an interposing relay found in automotive applications is the use of a “solenoid” in the electric starting motor circuit for an internal combustion engine. The “start” control switch is typically actuated by the driver turning a key, that switch mounted on the steering column or dashboard of the vehicle. The starting motor, meanwhile, typically draws hundreds of amps of current as it labors to start up the engine. A keyswitch capable of making and breaking hundreds of amps of current would be enormous, and quite dangerous to locate in the cab of the vehicle. The “solenoid” relay connected between the keyswitch and the starting motor relocates that danger and allows a relatively delicate keyswitch to safely activate the high-power motor.

It is worth noting that although control relays can be interposed for safety reasons, this is not synonymous with the category of devices called 'safety relays' with redundant sets of input coils and contact sets which meet strict safety regulations, normally for motor and motion applications.

Relays to Convert from AC to DC Voltage

An industrial example of an interposing relay between mismatched devices is shown here, where an AC output proximity switch must trigger an input channel to a Programmable Logic Controller (PLC) rated for only 24 volts DC: 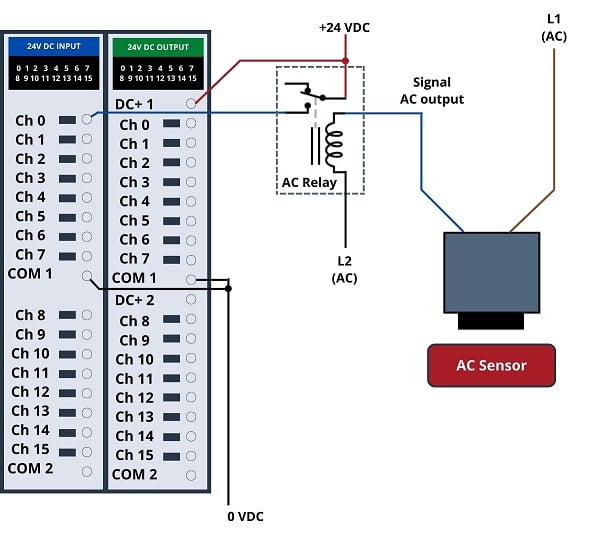 Interposing relays are also used to connect mismatched PLC outputs and control devices. In this application, the mismatch may be in terms of voltage ratings and/or current ratings. As with the input interposing circuit shown previously, the task of the relay in an output interposing circuit is to be controlled by the PLC’s output channel and, in turn, direct power to a field device that is itself incompatible with the PLC’s output.

The following diagram shows an example of an interposing relay connected to a PLC output channel to ‘amplify’ the current output: 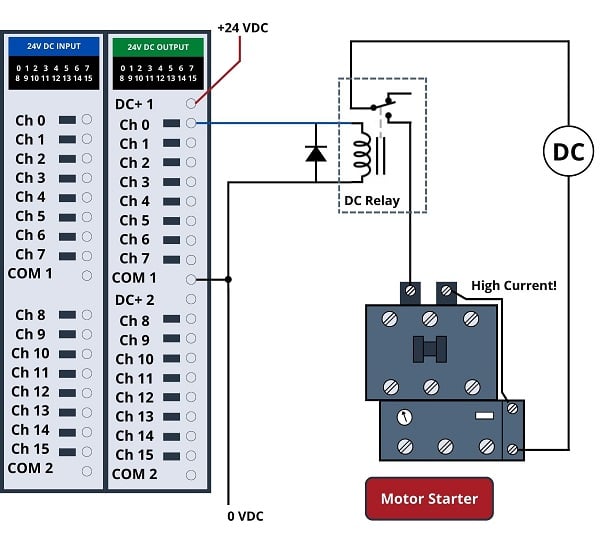 In this circuit, the PLC’s discrete transistor outputs can only handle a small amount of DC current. The three-phase contactor coil requires modest current levels to function, and so the relay interposes between the PLC’s low-current output channel and the relatively higher-current demands of the contactor’s coil. Many load devices would consume far more current, and the ability to amplify current is a key application of relay devices.

An important detail in this relay circuit is the inclusion of a commutating, or flyback diode in parallel with the relay coil, the purpose being to dissipate the coil’s stored energy upon de-energization when the proximity switch turns off. Without this diode in place, the coil’s “kickback” voltage (which may reach hundreds of volts in potential) will destroy the proximity switch’s output transistor.

Note how this commutating diode appears to be connected “backwards” with regard to the polarity of the 24 volt DC power source: cathode toward the source’s positive pole and anode toward the source’s negative pole. This is intentional, as we do not wish to have the diode conduct when power is applied to the relay coil through the proximity switch. The diode only turns on when the polarity reverses, which is what happens when the proximity switch turns off and the relay coil’s magnetic field collapses (now acting as a source rather than as a load). As the relay coil temporarily outputs a “reverse” voltage, the diode gives that coil a continuous path for its current while dropping a low voltage (about 0.7 volts DC), dissipating the coil’s stored energy in the form of heat at the diode.