In turn, this makes the automated installation of everything from carpets to bumpers faster and more productive.

According to automation industry leader ABB, less than 5% of the Final Trim Assembly (FTA) benefits from robotic automation.

Variations in production line speed, the vibration of automatic guided vehicles and conveyor belts, uneven floors, and other system irregularities combine to introduce difficulties when installing final trim automotive components that require high precision alignment. As a result of these difficulties in correct positioning, production is often slowed down or even paused to ensure proper alignment.

This allows a robot tool to synchronize, track, and install components on unstable targets moving along a continuous production line.

How the ABB Assembly Pack Works

The UVT camera tracks the car body's position as it enters an assembly workstation, synchronizing with the assembly line.

Once the car body reaches a set position, one or two CVG cameras located on the robot tool begin scanning the car body for reference points (e.g., door edges) by taking images at 30 - 40 fps. The CVG camera images determine where the attachment point is and the adjustments needed to line up with the part to be attached. 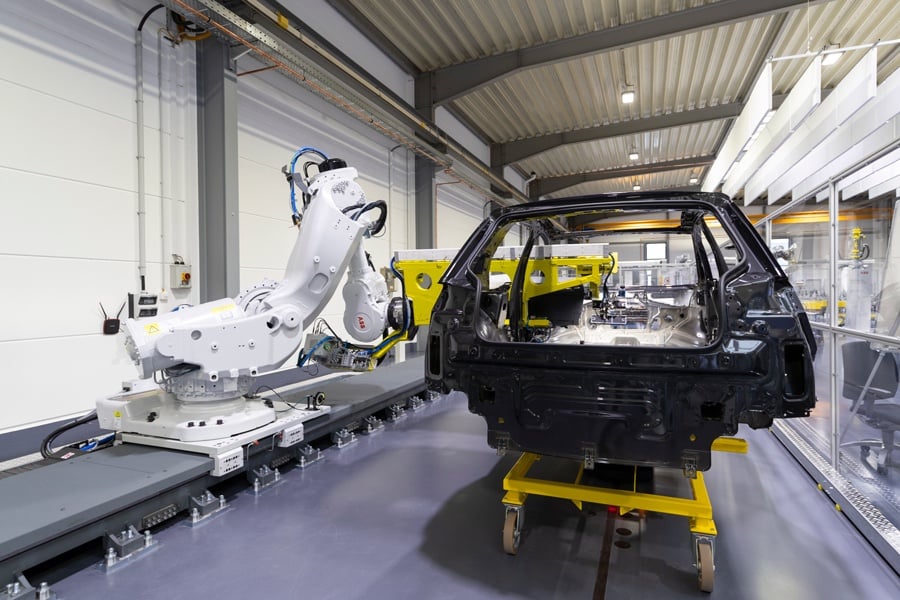 As the robot arm moves toward the attachment point, integrated force control sensors (typically installed between the robot's wrist and the tool) provide feedback based on torque and force inputs as it makes contact with the car body. This feedback allows the robot to find the installation position such that parts can be fitted with millimeter precision.

The Dynamic Assembly Pack by ABB is easy to integrate with existing assembly lines, compatible with ABB's Wizard software for industrial robot programming, improves productivity for and constitutes a replicable, scalable modular cell. All cameras included LEDs to provide a level of illumination that remains consistent to account for any variations in lighting.