Three main terminal block styles have dominated the control landscape: screw-down, spring-clamp, and push-in. Although this last style speeds up troubleshooting and installation, it has been a challenge to accept stranded wires, until now.

Installing and removing wires in control panel terminal block applications is a daily practice for engineers and technicians alike. Initial product prototyping and system integration lead to carefully crafted control cabinets that look just as immaculate as the intended performance of the system. With the numerous control and power conductors circulating through a cabinet, the terminal block connectors must be secure, accessible, and easy to identify when daily troubleshooting operations require interaction.

What Kinds of Terminal Blocks Exist?

For most terminal blocks, a carefully torqued screw prevents loose connections and possible short-circuits. Over the decades, many advancements have allowed designers to step away from these screw-down terminal blocks in favor of more ‘foolproof’ devices that will still operate reliably in the absence of special torquing tools and trained technicians.

Screwless terminal blocks originated with models that required an input force from a screwdriver to open and a spring-clamp cage to securely fasten a wire. However, in today’s evolving world, a migration to single-handed, rapid installation is useful, as long as the connections are secure.

In a recent announcement, industry giant Phoenix Contact revealed the new XTV series of push-in terminal blocks. The exciting feature in this series includes a spring-loaded design, much like a mousetrap, where even a light touch from a small-gauge wire will trigger the closing of the terminal cage. 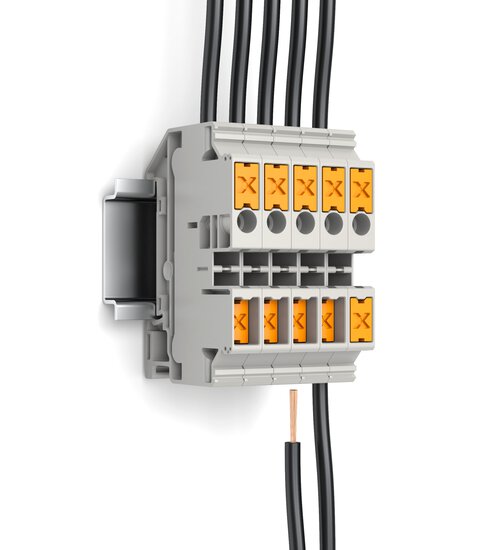 In contrast, the typical push-in style blocks require an insertion force, making them suitable only for solid-sore, ferruled, or stranded wires with solid tinned ends. Using these other models, a stranded conductor would be likely to bend and yield under such force, requiring extra time and tools to make effective repairs.

Removing Wires from the XTV System

Since the wires can be inserted and firmly clamped with only a light touch to trigger the spring, how then are they easily removed? Like most other spring-loaded models, including those from Phoenix Contacts’ other push-in technology, a screwdriver is used to press on the front of the terminal block. This not only releases the wire but also sets the spring, ready to allow a connection from a wire. 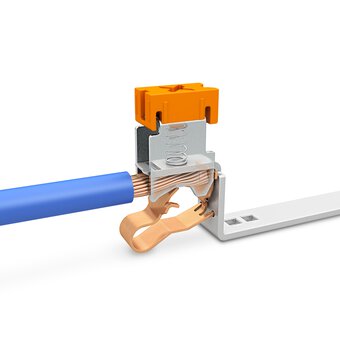 Using this method, an engineer or technician may open and ‘set’ each spring in an entire terminal strip in preparation for a large installation. Then, using only a single hand, may reference a diagram and rapidly insert each conductor, regardless of wire gauge or type, without requiring a set of torquing tools with various specifications.

Three maximum wire sizes are supported by the various models in this product series. Cross-sections of 6mm2, 10mm2, and 16mm2 (which equate roughly to 10, 7, and 5 AWG for each respective size) can benefit from this time- and space-saving technology.

This product series features side-entry wires, often preferred when used adjacent to wire trays, enabling both a more aesthetically attractive control panel layout as well as higher visibility for wire labels on the terminal blocks and the wires themselves. 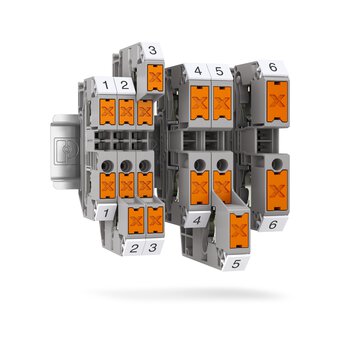 Consistent with recent technological advances, this product family also includes a QR code printed directly on the terminal block, which will navigate a smartphone user to a page of datasheets and specifications for that exact product.

As an engineer who has struggled with wiring challenges many times in the past, these advancements, although admittedly not fanciful or containing embedded digital systems as many devices these days, are exciting for day-to-day operations. We may have the privilege of troubleshooting a digital controller once in a while, but each time we open a cabinet, we may be thankful for wiring technology that allows us to fix problems faster, more securely, and with greater confidence of preventing future failures.