Take a look at some of the International Manufacturing Technology Show’s (IMTS’s) most exciting exhibits, including Universal Robots’ UR20, OnRobot’s D:PLOY, and FANUC’s CR cobots!

After disruption from COVID, the International Manufacturing Technology Show (IMTS) made its exciting comeback after four years absence. With big names from market leaders around the globe, IMTS takes place every two years in Chicago, bringing together students, teachers, enthusiasts, and companies for the latest scoop on automation and manufacturing technology.

Below, we’ll take a look at some of the latest and most well-known innovations that were demoed at IMTS just this past week, including Universal Robots’ UR20, OnRobot’s D:PLOY, and FANUC’s CR and CRX Cobots! 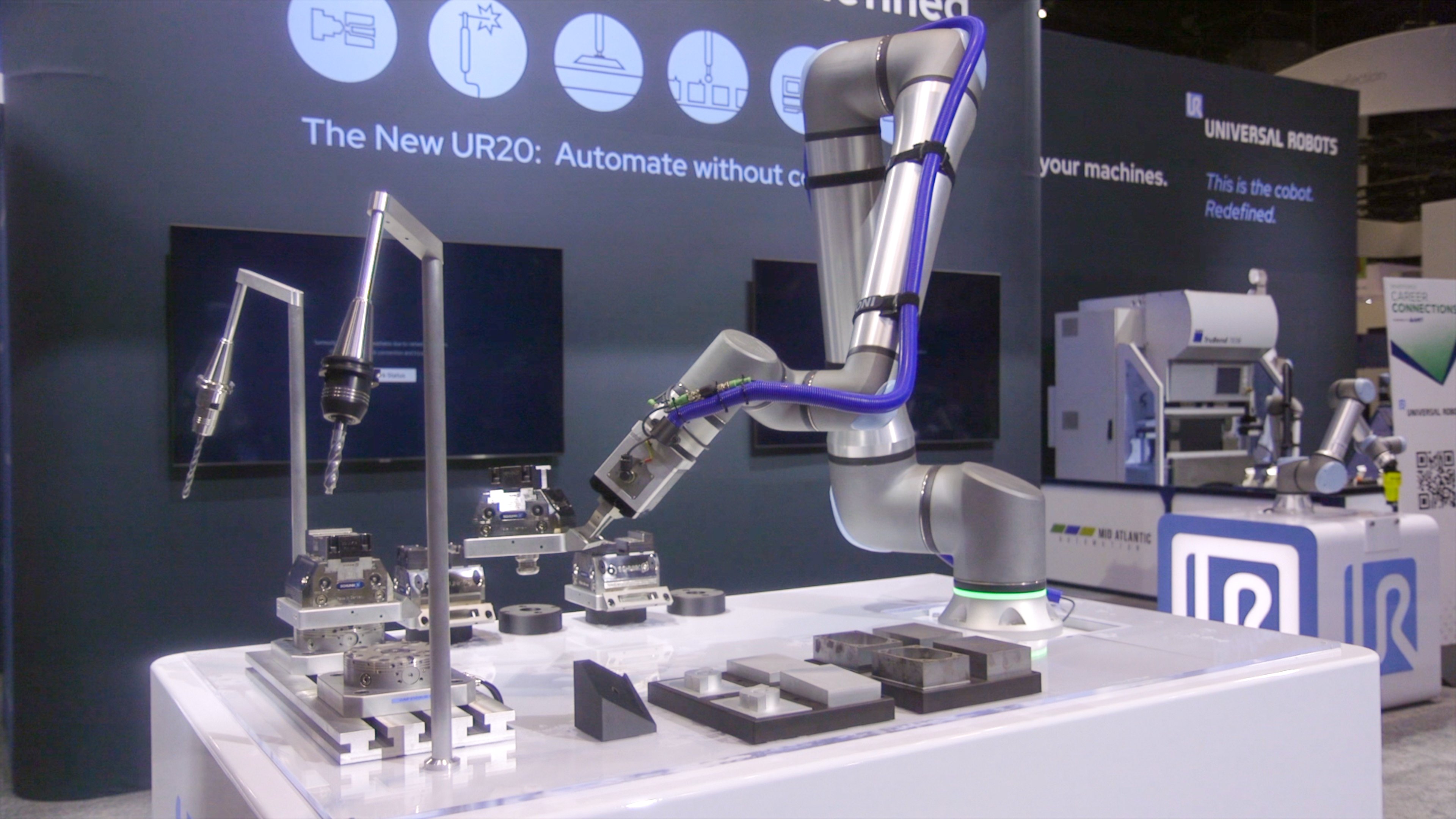 Global market leader in collaborative robotics, Universal Robots, debuted their highest performing cobot yet, the UR20, at IMTS. The UR20 looks like other Universal Robots’ cobots on the market, but features a hardware and software overhaul. With a reach of 1750 mm and a payload of 20kg, the UR20 has the heaviest payload of a Universal Robots' cobot on the market and is claimed to be the “lightest cobot in its class.” Anticipated applications of the UR20 include palletizing, machine tending, and welding. 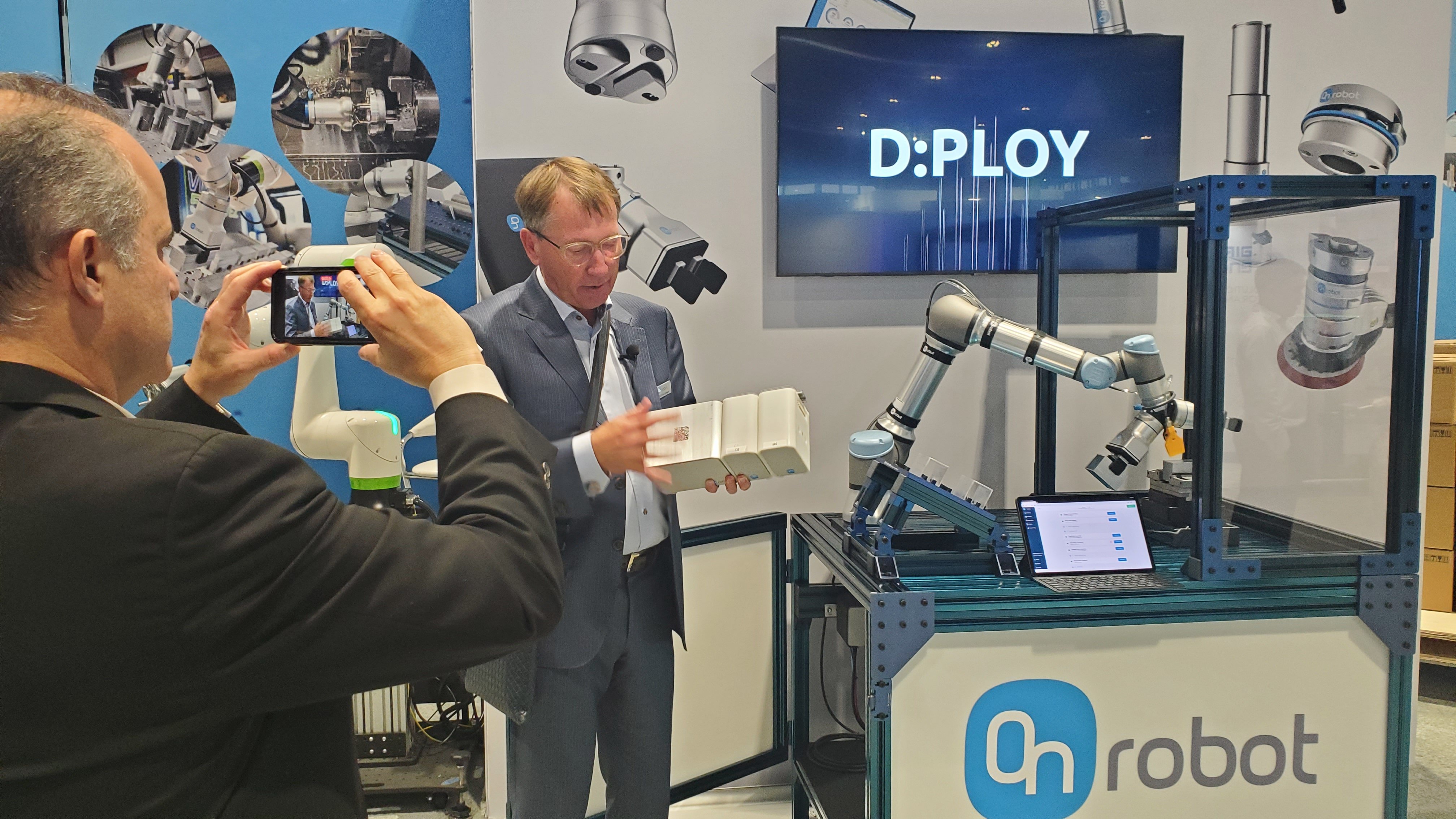 The first-of-its kind deployment solution was demoed at ITMS with a machine tending, UR5e cobot. Viewers had the opportunity to see D:PLOY’s application dashboard, which allows users to manage robotic devices, including end of arm tooling and sensors. The application also provides users with program logic, real-time monitoring, and other vital deployment tasks for user-friendly and efficient cobot operations.

Also showcased was OnRobot’s One-System Solution, which easily interfaces an OnRobot EOAT with a robot arm, and OnRobot’s Palletizer, which makes programming a cobot for palletizing simple, thanks to OnRobot’s D:PLOY software.

FANUC’s Strongest Cobot in the World

FANUC, the well-known leader in CNCs and robotics, showed off at IMTS with their M-200iA industrial robot lifting a Corvette. They also demonstrated their most recent additions to their CR cobot series. Claiming the strongest cobot in the world, the CR-35iB cobot has a 35 kg payload and 1831 mm reach, made for use in heavy-lifting applications that takes place alongside workers. IMTS attendees got an up-and-close look at the high payload cobot helping a technician piece together a bike.

Other technologies FANUC demoed included their newest SCARA robot, the ceiling mountable SR-3iA/U that can operate in 360 degrees for operation on a circular conveyor, their vertical machining center, ROBODRILL Plus, with its newest performance update, and their new EV battery assembling bot, the M-100iA.

FANUC hopes its newest technologies will aid companies in productivity and labor. FANUC also made an appearance at IMTS’s Smartforce Student Summit to provide information to students and prospective employees about career opportunities in automation.

Since its first show in 1927, IMTS has been at the forefront of innovation of manufacturing technology. As labor shortages continue to be problematic in manufacturing, new technologies reshape the industry for increased productivity, efficiency, and sustainability. Trade shows, like that of IMTS, play a key role in connecting companies, students, and teachers, inspiring the next wave of automation and manufacturing innovation.