KUKA Creates a Stir at Automate 2022 with its Latest Technologies

KUKA Creates a Stir at Automate 2022 with its Latest Technologies 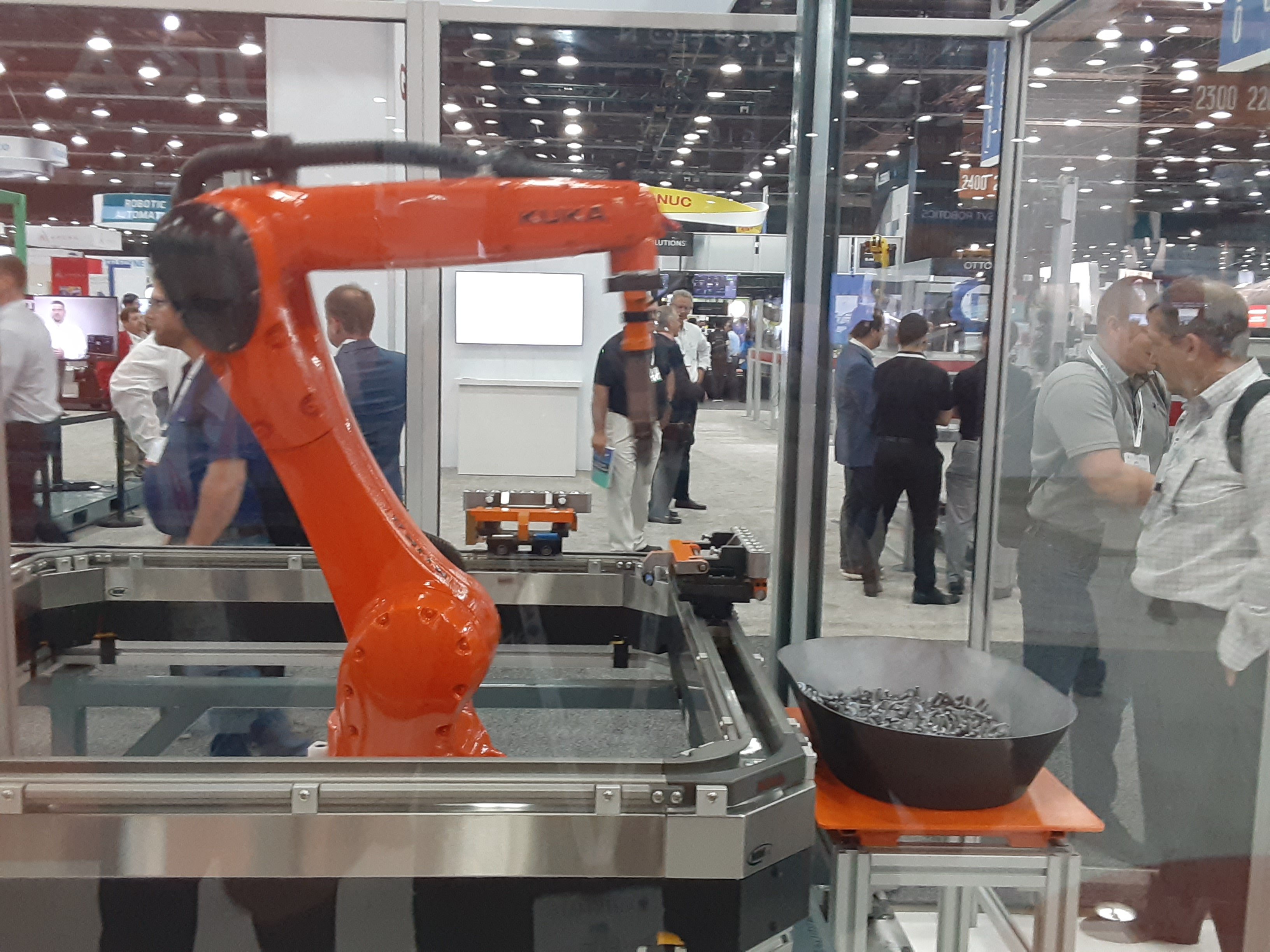 KUKA robot employed in a bin-picking application, demonstrated at Automate 2022.

What is Friction Stir Welding (FSW)?

FSW is a relatively new type of welding that is used to join two pieces of metal together. The solid-state joining process involves the use of a tool (such as a rotating pin) to join two metals of adjoining workpieces without melting them. The main benefit to using FSW is that it can be done at room temperature, which means that there is no need for expensive or dangerous equipment. This makes it much safer than other types of welds, which can cause burns or other injuries if they are not done in a controlled environment.

KUKA says that its robotic FSW process is the optimal joining process for non-ferrous metals and mixed metal combinations commonly associated with electric vehicle battery housing and tray fabrication. According to KUKA, FSW can provide high-quality, cost-effective welding with high seam strength. Low heat input also means that the process is more sustainable in terms of reducing the generation of waste heat.

KUKA demonstrated the FSW process at Automate 2022 with its KR 500 FORTEC picking and placing parts for the KR 10 CYBERTECH nano bot to weld. The KR 500 FORTEC features a reach of 3,326 mm and a payload capacity of up to 500 kg. The KR 10 CYBERTECH nano features a 1440 mm reach and offers repeatability of 0.04 mm. It can be mounted in any installation position (angle, ceiling, floor, wall).

With KUKA.Sim, manufacturers can plan their automation processes before system operation without being an expert programmer. Users can program, visualize, analyze, and optimize robot motion sequences offline and in real time. This allows processes and work cell layouts to be run as planned. Customers can create a digital twin and image of the proposed production process, allowing production lines to be virtually commissioned. Offline commissioning can save time, help improve reliability, verify processes, and boost sales for manufacturers. 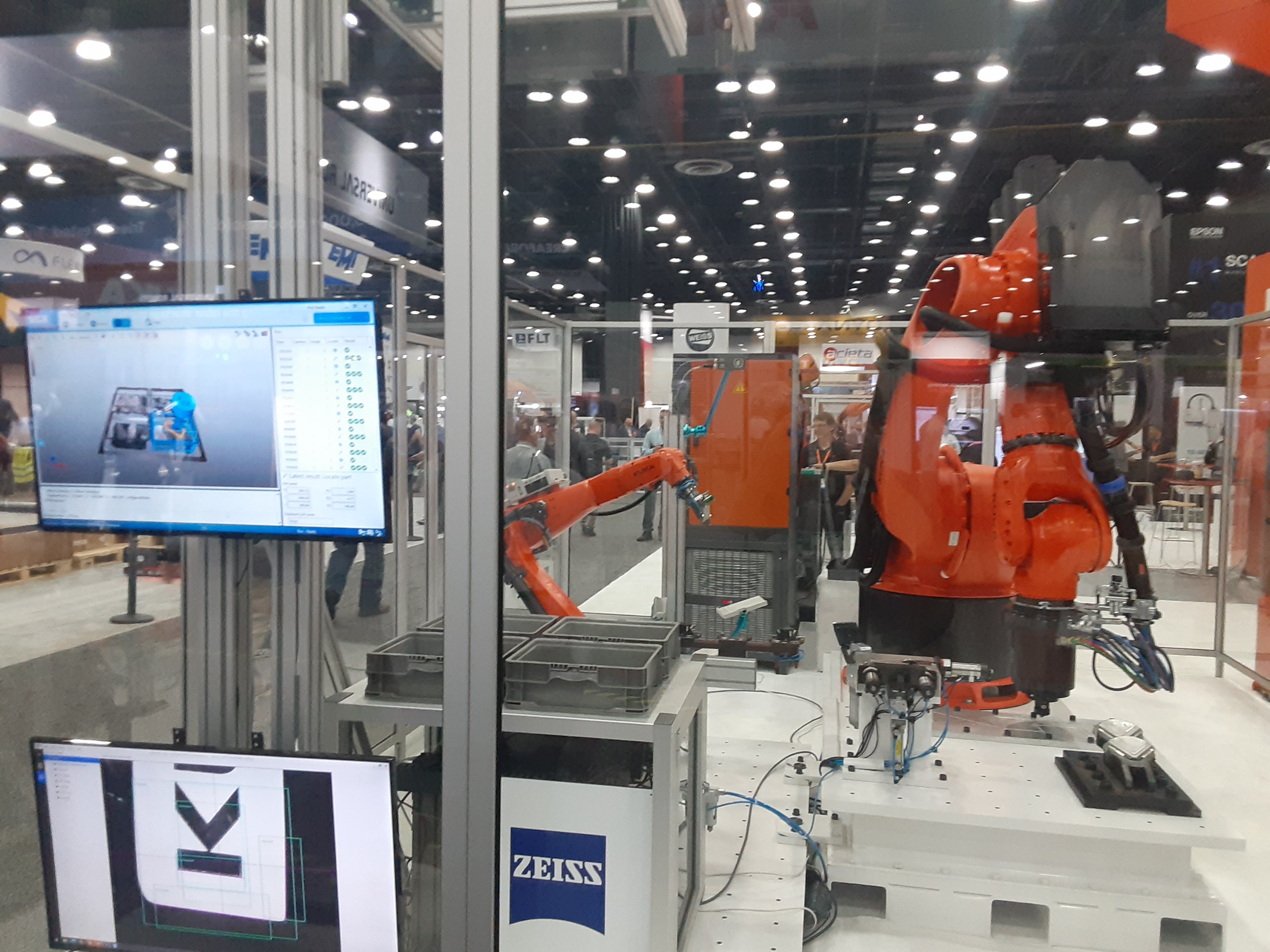 Coordinated motion of two robots within a workcell, guided by a software interfacre, is demonstrated at Automate 2022.

KUKA’s wireless ready2_pilot controller package offers operators the ability to teach their robots through manual input. A 6D mouse with two buttons can be used to select functions such as opening/closing a gripper, adjusting process parameters, or saving motions. This manual input method has been common in collaborative robots (cobots), but not often seen in traditional industrial robots. This advancement underlines the ongoing trend to make robot programming more intuitive and familiar for programmers of all skill levels, easing the cost of entry for all kinds of automation systems.

To maximize assembly line production, KUKA customers can use its latest KUKA.RoboTeam software. The software allows for the synchronization and geometric coupling of robots undertaking corroborated work. Program and motion can be synchronized for two or more robots. The operation of two or more robots with an external axis kinematic system can be synchronized, where load sharing and process-dependent modes can be combined. An internal safety bus system communicates safety-relevant signals to the robot group. An emergency stop of any robot in the group triggers synchronized, path-maintaining braking of the entire robot group.

Attendees at Automate 2022 got to experience KUKA’s bolt-picking robot cell with a KUKA KR 6 AGILUS robot paired with a KEYENCE 3D Vision System. The 6-axis KR 6 AGILUS is designed to work at high speeds for bin and bolt picking. The bot can be adapted to suit any installation position and can work in almost any environment. 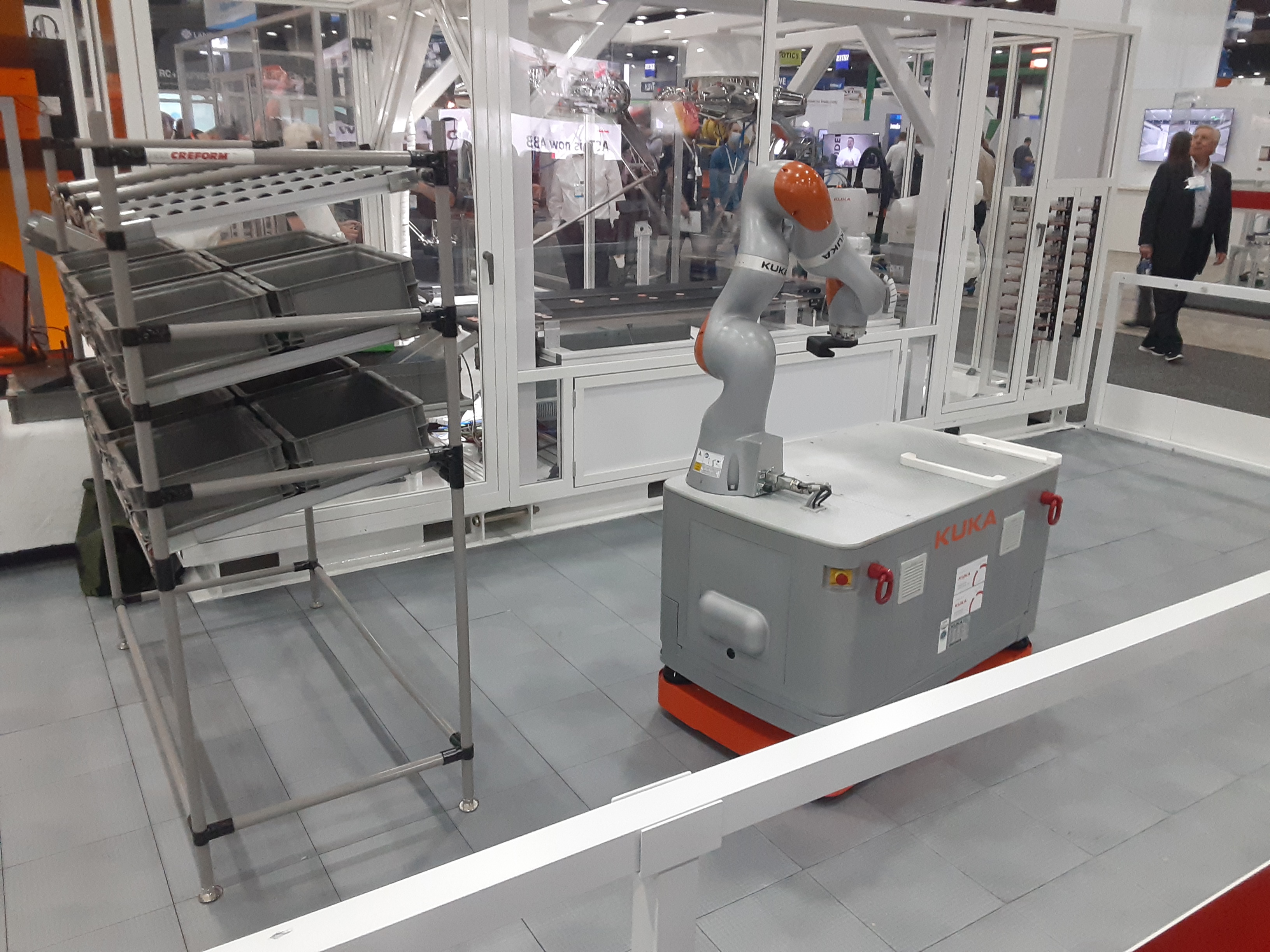 KUKA demonstrated an industrial robot mounted to a mobile robot for automated storage and retrieval at Automate 2022.

The KR 6 AGILUS uses a KEYENCE 3D Vision System to selectively identify and pick parts. The vision system also calculates the optimal robot motion paths to avoid collisions as parts are selected, picked, and deposited. Coordinates of bolt positions are sent to the robot through the KEYENCE system. KUKA believes that these capabilities can serve to promote faster and more flexible picking. According to KUKA the capabilities of this system allow for increased uptime and availability. Together, the KR 6 AGILUS and KEYENCE system work to help manufacturers streamline processes and increase productivity for automotive assembly applications.