Keyence released a PLC with all of the typical features, like I/O, but the company added integrated machine operation recording to improve remote operation and troubleshooting.

Keyence has released its very own PLC with a full suite of I/O modules and integrated machine operation recording. The KV-8000 uses KV Studio v11, which allows for online editing, simulating, and replay, just to name a few of its features. 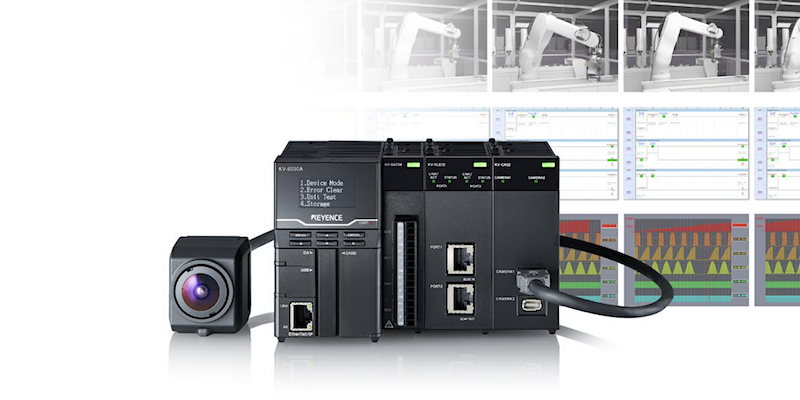 The ladder execution speed of the KV-8000 CPU is an impressive 0.96 ns with a program capacity of 64 MB, Ethernet IP interface, and the capability of FTP client or server. With all these features, the one that speaks volumes is the ability to record and playback video, device configurations, and control logic at the same time.

Whenever a customer calls to report or troubleshoot a problem, the controls engineer needs to play detective to figure out the root cause—asking the customer who, what, when, where, and why doesn’t always get them very far. With Keyence’s machine operation recorder function, the controls engineer can rewind the video recording and the control logic to match.  This can be a game-changer for machine builders.

While installing cameras for troubleshooting is nothing new, having an integrated vision system in the PLC is. Current systems would require complex and expensive SCADA systems plus hours of configuring and programming. With the proper hardware hooked up, the KV-8000 only requires a trigger to be configured. This trigger could be an alarm or machine event.

Synchronized playback is one of the most exciting features. The ability to not only record video, control logic, and event log combined is exciting, but the ability to play back those recordings synchronized is a step into the future of machine automation.

Sections of the ladder program can be extracted for later analysis. Image used courtesy of Keyence

A control engineer will typically have to review video of the incident and read through the logic and assume which rungs were being solved. But, with synchronized playback, we can now step through exactly what happened and see the logic solve along with the video in real-time.

Keyence is also releasing a line of touch panels to interface with the machine operation recorder feature.

Offered in 12-in and 15-in models, these touch screen panels allow easy access to all recorded device changes, video recordings, and event logs. These panels enable maintenance personnel to quickly determine root cause or export data for offline analysis of the issue.

Now more than ever, controls engineers troubleshoot issues remotely and report root cause to management. With the KV-8000, a tree diagram can automatically be created. This diagram includes information related to the devices, configurations, and edits from the touch panel, along with a feature that will export a section of the ladder PLC code that caused the problem.  This report can be given to management to show where the problem was and how it was fixed.  It can be a powerful tool for machine builders and maintenance personnel.

When troubleshooting Edge case scenarios, it’s helpful to trace signals within the PLC. While this process is not new, Keyence has added a nice little touch. 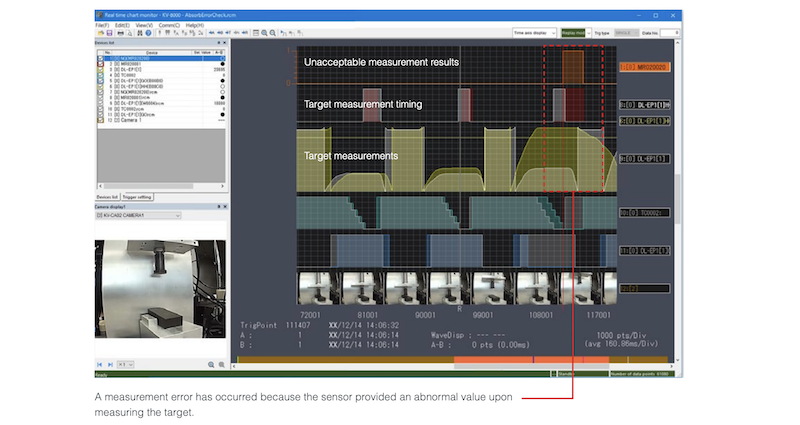 The waveforms compare tool is visible from the touch panel or exported to a CSV file for offline comparison. The waveforms can be compared along with the video on the same screen.  This allows the technician to review tooling movements and time monitoring multiple signals.

Keyence has taken a concept that machine integrators have been using for years and integrated it into one controller, making debugging and startup faster. The ability to record video and data on a programmed trigger then review in a synchronized playback can drastically improve remote support and onsite troubleshooting, along with machine automation code debugging.