Here's a look at Mitsubishi Electric's latest range of high-performance delta robots for use in automation.

For certain applications, the new delta robots offer many advantages over robotic systems such as arms and 3-axis machines.

Robotics in automation is a massive industry and choosing the right type for your production line is critical. Delta robots are those that consist of arms connected to stationary motors who all connect to a single base using universal joints.

Unlike many other designs, delta robots do not have a serial link between joints but a parallel link. Serially-linked robots are those where joints carry the weight of the rest of the arm after them with a common example being robotic arms; the first joint carries the weight of all the other joints and their respective motors while the next joint carries the motors after that.

The use of multiple arms connecting to the same platform makes delta robots stiff relative to serial robots such as arms. Delta robots, however, are far more complex when describing motion  as all arms linked to the base need to work in parallel with each at a different angle. 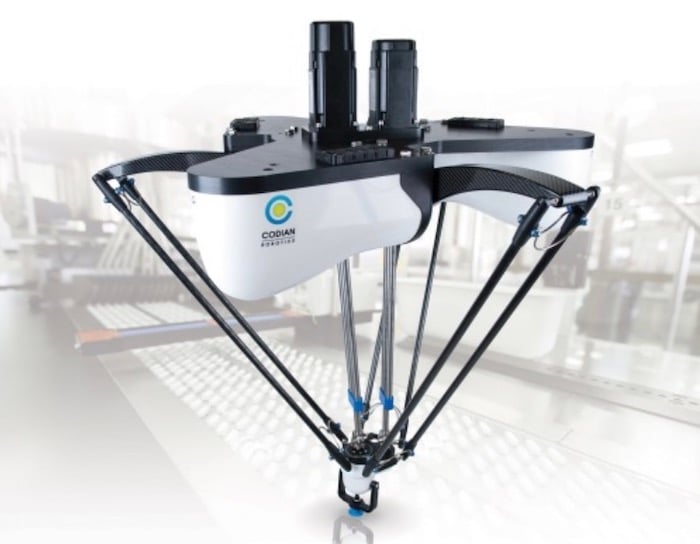 Delta robots are fast and can accelerate quickly which makes them ideal for pick-and-place applications such as electronics manufacturing. One of the reasons for their high speed and acceleration is due to the fact that they are parallel whereby the arms do not carry the weight of the other arms and joints. As a result, these robots are commonly found in packaging applications including food, cosmetics, and pharmaceuticals.

Delta robots are less appropriate in applications involving high strength requirements, such as lifting heavy loads. Just as their quick, deft movements are aided by their low weight, their small, spider-like arms are limited in weight-carrying capacity.

Mitsubishi Electric, however, may challenge this paradigm with their new series with Codian Robotics.

Mitsubishi Electric announced a new range of delta robots that combine their servo technology with mechanical components from Dutch company Codian Robotics, one of their [email protected] Alliance partners.

Codian Robotics has pioneered innovations for delta robotics by using a range of high-strength materials including carbon fiber, titanium, and anodized aluminum, plastics, and steel to create robots that have high strength-to-weight ratios.

The use of lighter weight parts while retaining strength dramatically increases the operating speed of delta robots enabling packing lines to have increased throughput. But Codian Robotics has also developed interchanger parts which, when combined with Mitsubishi Electric’s servo motion packages, can scale delta robotics.

According to Mitsubishi, the result is a form of delta robotics than can be integrated into different control platforms. 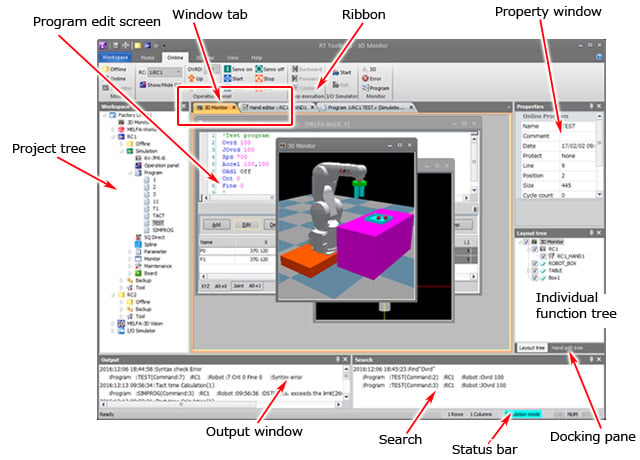 The operation screen of the RT ToolBox3 program. Image used courtesy of Mitsubishi

Using PLCs, on the other hand, can be facilitated with the use of Mitsubishi's iQ Monozukuri Handling application package. 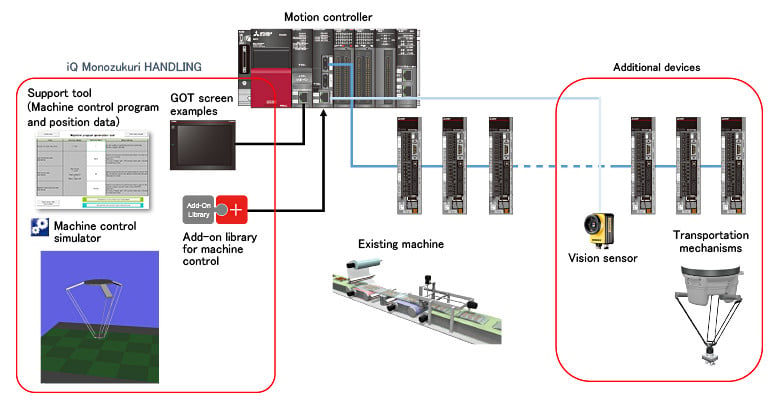 One of the things that Codian asserts makes them unique is that their delta robotics do not require outside control systems to operate. As demonstrated in their "flexible palletizing" system, their robotics are camera-controlled and therefore operate "without package guides or separate robot control."

According to the Codian Robotics website, their delta robotics can be controlled by "all" machine controllers. This means that these robotics are designed for easy integration into various facilities as the kinematics associated with these robots are already in the libraries of "well-known" control system suppliers.

What's your experience with delta robots in manufacturing? Share your thoughts on this new series in the comments below.