The National Electrical Manufacturers Association (NEMA) partnered with the Northwest Energy Efficiency Alliance (NEEA) and the Cadeo Group on a new report about energy savings for power drive systems (PDS).

The document is called Power Drive Systems: Energy Savings and Non-Energy Benefits in Constant & Variable Load Applications and was completed in June of 2020. The new research examines the energy savings potential of using a PDS with pumps and was officially published last week.

The expertise of the companies behind the new report is far-reaching. NEMA is the biggest trade association of electrical equipment manufacturers in the United States. The institution has been operating since 1926, and has, throughout the years published a number of standards for electrical products.

NEEA, on the other hand, is an organization including more than 140 Northwest energy and utility organizations that focus on green initiatives working on behalf of more than 12 million energy consumers. Founded in 1997, the Alliance has so far reported over 1,400 aMW of delivered energy.

A Thorough Research on Energy Savings and Power Drive Systems

The new report released by NEMA, NEEA, and the Cadeo Group is based on data gathered from 132 clean water pumps located in active sites across the Pacific Northwest. The results of the analysis estimated that overall energy savings would be possible up to 43 percent in relation to energy demand reduction for variable speed applications.

The data also showed that more than 20 percent of the energy could be saved in constant speed applications. PDS could have a host of non-energy values that may benefit the market to accelerate the widespread use of non-traditional applications. 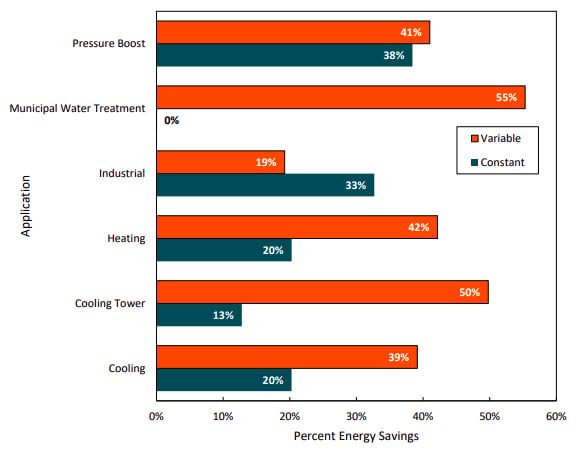 According to the researchers, the new report would represent one of the first independent attempts at calculating energy savings via PDS in commercial and industrial pumps, also comparing them to traditional fixed-speed motors.

“While using a PDS in a variable speed system is common,” said Cadeo Group Director Sara Widder, “this analysis is the first research published showing the energy savings potential in constant load applications.”

According to Widder, the research results showed that the estimated payback period could be under ten months in a constant load system.

“This was unexpected and exciting for the group,” Widder said.

The new findings thus address some of the issues related to PDS adoption in constant load applications. For example, a primary barrier to this adoption is the perception that only variable load applications like heating and cooling systems responding to variable climate conditions can realize the energy savings potential of PDS.

According to this view, PDS would not justify their cost unless installed on highly variable loads. The new report aims at demystifying this viewpoint, however, highlighting other energy savings mechanisms and/or non-energy benefits coming from the installation of a PDS. The report concludes PDS in constant load applications could in time prove greatly beneficial to engineers in the power and energy sectors.

Count of pumps, by load type, presence of a PDS, and application. Image courtesy of NEEA.

“At a time when so many facilities are adapting to building usage from COVID-19, incorporating a PDS can optimize energy use until building occupancy returns to pre-COVID-19 levels,” explained Nidec Motor Corp representative Rob Boteler.

Boteler, who is also Energy Management Committee Chair to the NEMA Motor and Generator Section, also highlighted the value of PDS in an industry that is highly reliant on motors, Boteler added.

“Since motor driven products use more than 40 percent of all energy in commercial and industrial processes, reducing energy consumption from motor systems is significant work.”

In fact, according to the report, these energy savings mechanisms would also apply to other variable torque applications, such as fans and compressed air. To read the report in its entirety, you can follow this link.

What do you think about it? Let us know in the comments down below.