Pepperl+Fuchs specializes in electrical explosion protection and sensor technology. Founded in 1945, the two founders, Walter Pepperl and Ludwig Fuchs, started a radio workshop in Germany. Having developed products for customers from the start, the two continued innovations in the electronics field, and this innovation result was the inductive proximity switch.

Since then, the company has grown to 5,900 employees worldwide, sales of over 650 million euros, and operations in various fields, including sensors, explosion protection, and industrial equipment.

An example of this would be an electromagnetic relay. Electromagnetic relays are typically used for switching large loads, but they can generate a spark. If a relay is used in an explosive environment (such as vaporized fuel), the vapor could ignite, resulting in an explosion. However, not all industrial enclosures are fit for explosive atmospheres. As such, it is essential to choose the proper enclosure.

Recently, Pepperl+Fuchs announced that they are combining two technologies from different product lines to create a new range of standardized industrial enclosures for use in explosive atmospheres. These are the FB remote I/O series and the GR series.

The FB remote I/O system is a range of enclosures and I/O designed for zone 1 explosive environments and includes devices such as analog inputs, digital inputs, and relays.

The GR series are enclosures that utilize glass fiber reinforced polyester to create an enclosure that provides IP66 protection. The use of fiberglass reduces the generation of static electricity (a major point of concern for explosive environments), while gaskets and cable glands help ensure the unit’s atmospheric integrity. UV-stabilized material also resists degradation over time as well as provides corrosion resistance. 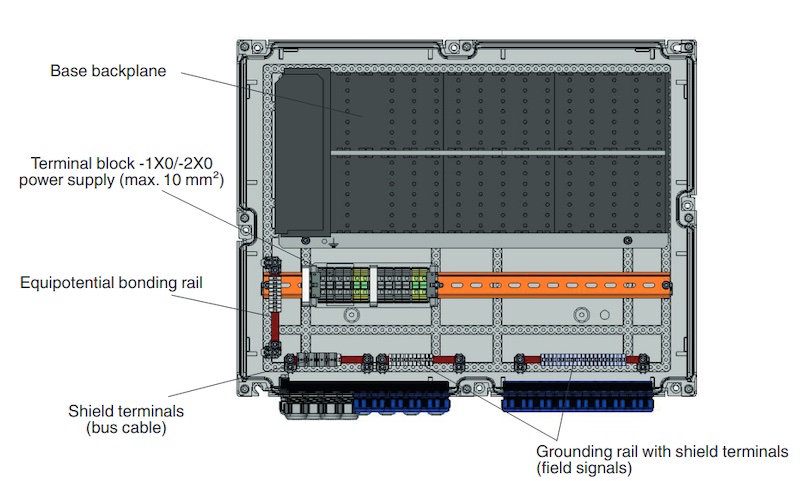 Rendering of an I/O module. Image used courtesy of Pepperl+Fuchs

The new series of four standardized field units combine the FB series’s explosive capabilities with the GR series’s fiberglass advantages. The four separate enclosures come in different varieties and support 20 to 24 single-width I/O modules and 10 to 12 double-width I/O modules. As I/O modules can be installed in any slot inside the unit, the units offer great flexibility, and the addition of redundant power and Fieldbus connections helps to ensure reliability.

The new enclosures can be used with standard off-the-shelf DIN devices, but their advantages are maximized when used with the Pepperl+Fuchs FB I/O range. The new enclosures can be used in any industrial process expecting to see frequent vapors from a production process such as chemical production or fuel distillation. However, the IP66 rating also means that it can withstand a direct blast from a water jet and prevent any dust from getting inside. Therefore, the unit is even fit for wet and dusty environments.

The unit’s UV-resistant characteristics and IP rating also make it useful in remote outdoor environments. The UV-resistance will protect against damage from the sun, while the IP66 rating will prevent damage from weather. Lastly, integrating redundant Fieldbus and power connections makes the unit beneficial in industrial applications where reliability is critical.