What is a Remote Terminal Unit (RTU)?

What is a Remote Terminal Unit (RTU)?

Learn the basics of remote terminal units (RTUs) and how they fit into a SCADA system.

RTU stands for remote terminal unit. An RTU is a control device typically installed in a remote location as part of a large system. The main purpose of an RTU is to monitor and control field devices, such as valves, actuators, sensors, and more. RTUs are essential components of supervisory control and data acquisition (SCADA) systems, establishing interfaces between SCADA control and physical processes. 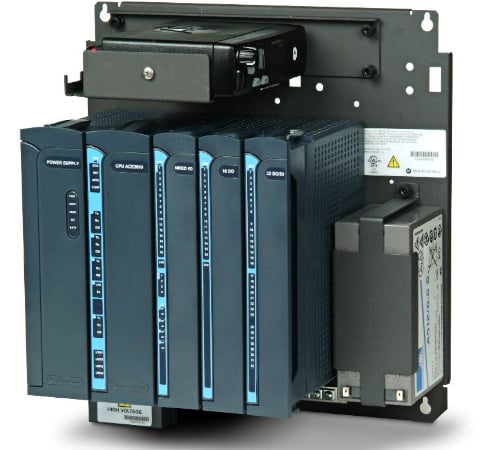 Figure 1. The ACE3600 is a popular RTU by Motorola. Image used courtesy of EBIPAX

RTUs are sometimes misclassified as programmable logic controllers (PLCs) due to their similarities and the latter’s dominance in the industrial automation field. There are, however, several technical differences between them, as well as different applications for which one is better suited than the other.

The history of RTUs is closely connected to the history of SCADA. The earliest SCADA systems originated in power generation plants in the 1950s. The challenge at the time was collecting data from interconnected substations and sending it to the main control room. This was achieved thanks to the first telemetry applications, essentially, the first RTUs.

Later, in the 1960s and 1970s, with the advances in computer science, it became possible to implement the first electronics-based SCADA and RTU systems. Instrumentation was installed at longer distances than before, and RTUs offered the ability to acquire larger volumes of data and perform some basic control functions.

The modern version of the RTU was introduced in the 1980s and developed throughout the 1990s. The RTU was now microprocessor-based and able to execute more advanced logic, similar to PLCs. New communication protocols were introduced, allowing for even more information to be exchanged reliably. RS-232, RS-482, and later Ethernet are some of the most widely used protocols. Contemporary RTUs come with more features and functionalities.

An RTU consists of a hardware panel where one or more input/output (I/O) modules are installed. The most important components of an RTU are the central processing unit (CPU), power supply, communication port, and physical I/O. We will review these components in more detail next. 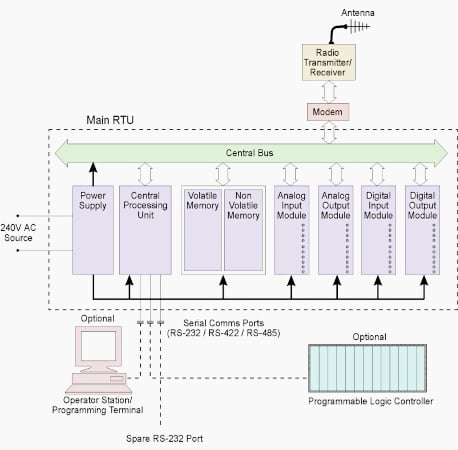 The CPU may consist of one or more complex circuit cards that execute central function processing. Modern RTUs use 32-bits microprocessors. The CPU makes use of a watchdog timer to validate that the cycle execution is done correctly. The CPU module may also be equipped with ethernet communication ports. Some RTUs come with dual CPUs, in which case, they are configured as primary and backup, providing redundancy to the device.

RTUs are normally supplied with continuous power from a main line. However, the remote locations where RTUs may be installed are also typically provisioned with backup battery modules. This can help ensure uninterrupted operation for a period of time. The most common type of battery used is lead-acid, although lithium batteries have been gaining popularity more recently.

Every RTU needs a way to communicate to the outside with the client (or master) SCADA station. To achieve this, they are equipped with at least one communication port. RTUs support many communication protocols, including Ethernet, RS-232, and Modbus. Some of the most common topologies supported in RTU and SCADA networks are ring, series, star, etc.

Now that we understand how RTUs work and their components, let’s briefly look into how they fit into SCADA systems.

A complete SCADA architecture includes different types of field devices. These devices can be connected to one or more RTUs in the system and transmit data about physical events. There is a wide variety of field devices available in the market today, considering the number of different SCADA systems. 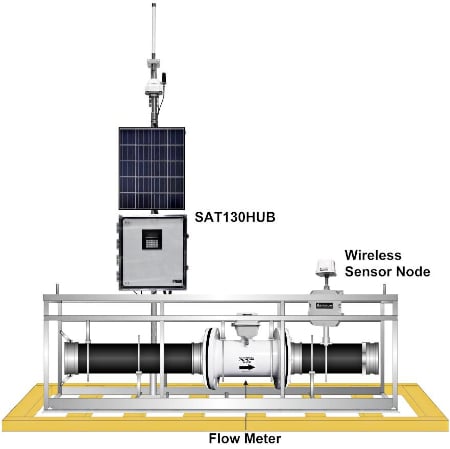 Figure 3. An example of a flow meter and a wireless sensor connected to an RTU. Image used courtesy of Bentek Systems

Some of the most common devices are proximity sensors, temperature sensors, flow meters, level meters (for liquids), wireless sensors, and more. An RTU’s role is to compile the information provided by these field devices and communicate it to the central SCADA control.

RTUs are important devices in SCADA, especially over long distances. They easily integrate into control systems and are popular for remotely monitoring conditions, such as fluid levels. In the next article, we will dive further into the differences between RTUs and PLCs.