The Basics of a Resistance Temperature Detector (RTD)

The Basics of a Resistance Temperature Detector (RTD)

Learn how resistance temperature detectors (RTDs) work, how to calibrate one, advantages and disadvantages, and uses in industry.

Temperature is one of the most routinely measured physical quantities in industry. For instance, food and beverage manufacturers must maintain certain temperature conditions to ensure that their products are in compliance with Food and Drug Administration (FDA) regulations and to prevent spoilage. The chemical industry must carefully monitor temperature to control reaction kinetics and prevent runaway reactions and side reactions, as well as to optimize energy usage.

How Does a Resistance Temperature Detector (RTD) Work?

There are many ways to measure temperature, most of which take advantage of hotter atoms that have more energy, and thus vibrate quicker. Thermal expansion methods of temperature detection, such as the expansion of mercury (or colored alcohol) in a thermometer is evidence of this faster vibration.

As a material heats, its electrical resistance increases. The atoms in the material vibrate faster, and thus, flowing electrons are more likely to be repulsed by existing electrons trapped in the orbits of these atoms. As anyone shooting a basketball knows, it is easier to shoot the basket if the defender is not flailing their arms in the way; the same is true with an electron trying to pass through a material. If the temperature were to drop to absolute zero (no atomic motion), the resistance would be very low, as the electrons would not encounter the random motion of these atoms, and could zip through easily. 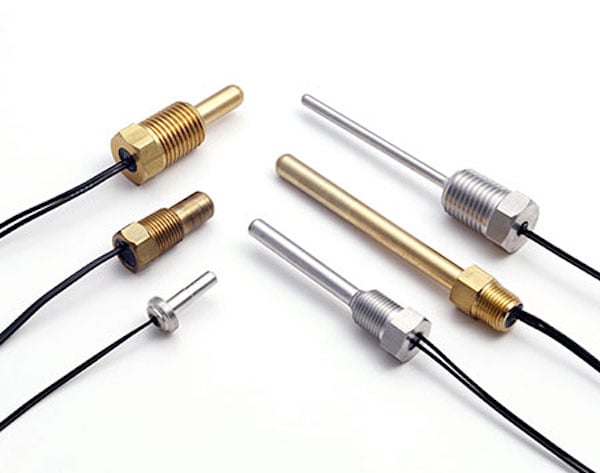 What is a Resistance Temperature Detector (RTD)?

An RTD is simply a piece of metal wire, usually platinum, that has a known resistance at 0°C.

It also must have a predictable resistance with a change in temperature. This change in resistance is described by a linear equation. For example, one of the most common RTD on the market is the “Pt100,” which stands for a platinum wire with 100 Ω of resistance at 0 °C. This RTD can also be described by the equation:

Where R is the resistance and T is the temperature.  Solved for T: 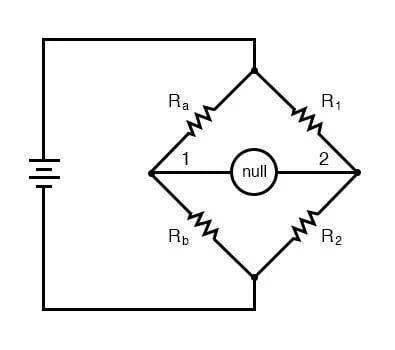 One could use their knowledge of circuit analysis, and the linear equation for the RTD to calculate the temperature change for a given voltage change. A more common way to determine the temperature is through a calibration procedure.

How to Calibrate a Resistance Temperature Detector (RTD)

To calibrate an RTD, place the RTD in an ice water bath. When the voltage stops changing, note the temperature (on a calibrated thermometer) and the voltage at the Wheatstone Bridge circuit.  Repeat this process with room temperature water, heated water, boiling water, etc. The more data points, the better. From there, one can plot these points and find a best-fit line that will describe the relationship between voltage and temperature. 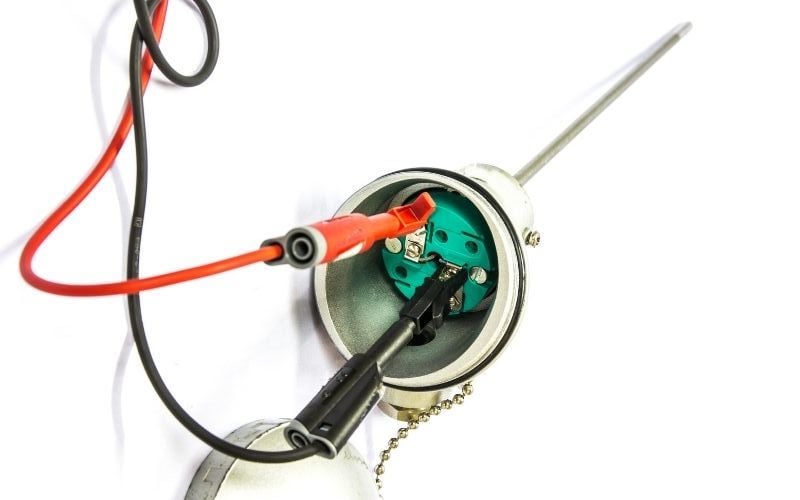 Figure 4. A way to calibrate an RTD.

RTDs can provide an accurate temperature measurement, provided the temperature does not change rapidly. Therefore, they can be used for repeatable, steady-state reactions and processes.

RTDs are slower to respond than other temperature sensors. In order to understand why, consider that there are three modes of heat transfer: conduction, convection, and radiation.

Conduction requires heat to flow directly between two solid materials, such as touching a hot stove. Convection is heat transfer due to moving fluid, such as blowing on hot soup. Radiative heat transfer deals with which wavelengths and at what intensity are emitted from an object, such as feeling the heat from an open fire.

The RTD does not directly touch the heated environment, and so conduction is limited. RTDs are often housed in an evacuated chamber, limiting convection. Radiative heat transfer is possible, though it is much more efficient at high temperatures. Therefore, all three methods of heat transfer are much slower in an RTD.

There are several ways to overcome the problems presented by the lead wires. In general, keep lead wires short, and calibrate and spot-check the RTD whenever possible. If the system is calibrated with the RTD leads, it will account for the resistance of the leads at specific temperatures. Also, RTDs can be plugged into wireless transmitters for data logging, instead of running longer leads.

RTDs are just one method of measuring temperature. They are particularly useful when temperatures need to be accurately measured and recorded but aren’t expected to change very quickly.

RTDs are excellent at making accurate temperature measurements, provided the temperature does not change very rapidly. They are rugged and have a long service life.

These factors make RTDs fit for continuous process monitoring. Continuous reactors, distillation columns, and heat exchangers use RTDs for statistical process control (SPC) purposes. The data can be used to track slowly rising temperatures inside a reactor, creep conditions inside steam pipes, and so on.

The RTD is not suitable for reactions that can run away rapidly, or in tight control loops that control these types of reactions. Due to the slow response time, they should not be used where a runaway reaction could occur and quickly spiral out of control.

Besides this limitation, RTDs have been used successfully in a number of industries. For example, the food and beverage manufacturing industries can use RTDs to carefully monitor refrigeration systems and heating systems. Safety and legal considerations require detailed records of food processing so that contaminated products can be prevented, and if they hit market, be recalled quickly. RTDs, with their accurate, reliable, and maintenance-free service are often used to take temperature measurements in these environments. Because the temperature of a large refrigeration system does not change rapidly, they are suitable for this type of record-keeping and control.

What industry have you seen RTDs used in? What are some advantages and limitations you’ve seen?