This article will introduce Modbus, an industrial protocol that laid the foundation for fieldbus communication in industrial systems.

In 1979, Modicon introduced an application layer protocol (layer 7 of the OSI model) for use with its Programmable Logic Controllers (PLC). This protocol was called Modbus and became the first widely used fieldbus in the history of automation.

A fieldbus is a communication protocol used in industrial networks to connect field devices to industrial controllers. A fieldbus often reduces the amount of wiring needed between controllers and devices because multiple devices can connect to the same pair of wires.

There are a number of popular fieldbus technologies out there including Modbus, Profibus, Foundation Fieldbus, ControlNet, DeviceNet, and many others.

Figure 1 shows a PLC connected to field devices via a fieldbus. 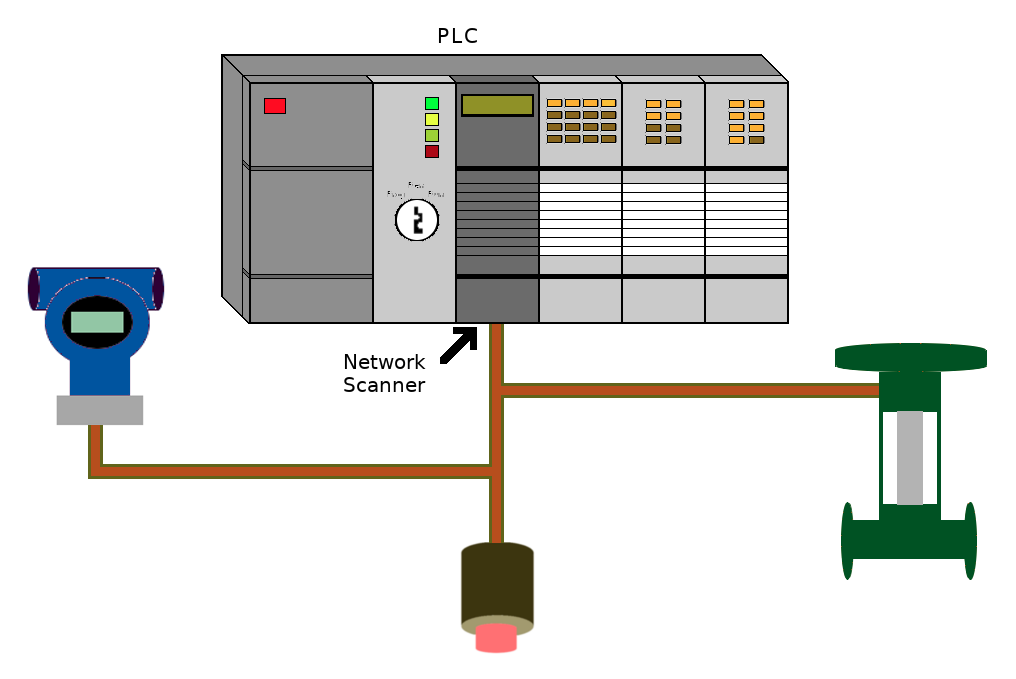 Modbus was designed to connect field devices to industrial controllers. At the time of its invention, most devices used voltage or current representations as a means to communicate the device's state. This meant high or low bits for discrete control and 0-10V or 4-20mA for analog control.

The slow transition to fieldbus technologies resulted in Modbus being one of the simplest protocols with new versions being added over the years.

Originally, Modbus was implemented over a serial communication link, i.e., RS-232/RS-485. Eventually, the protocol was adapted for use over TCP/IP and Ethernet. This is commonly referred to as Modbus TCP. There are other versions of Modbus including one called Modbus+ that uses the HDLC protocol. These other versions won't be discussed in this article.

Modbus uses a master/slave model for communication (client/server in Modbus TCP). A Modbus master sends a request to a Modbus slave which performs actions and responds to the master. In this scenario, a master is often a PLC, with field devices behaving as the slaves.

A message frame in Modbus is composed of an application data unit (ADU) and a protocol data unit (PDU). The ADU will differ depending on the type of Modbus being used, while the PDU is independent of the communication method.

A PDU is normally composed of a function code and some data. This is encapsulated in the ADU by an address and error checking code. Modbus TCP uses an MBAP (Modbus Application Protocol) header in the ADU.

Figure 2 shows a Modbus frame comprised of a PDU and ADU for both classic Modbus and Modbus TCP. 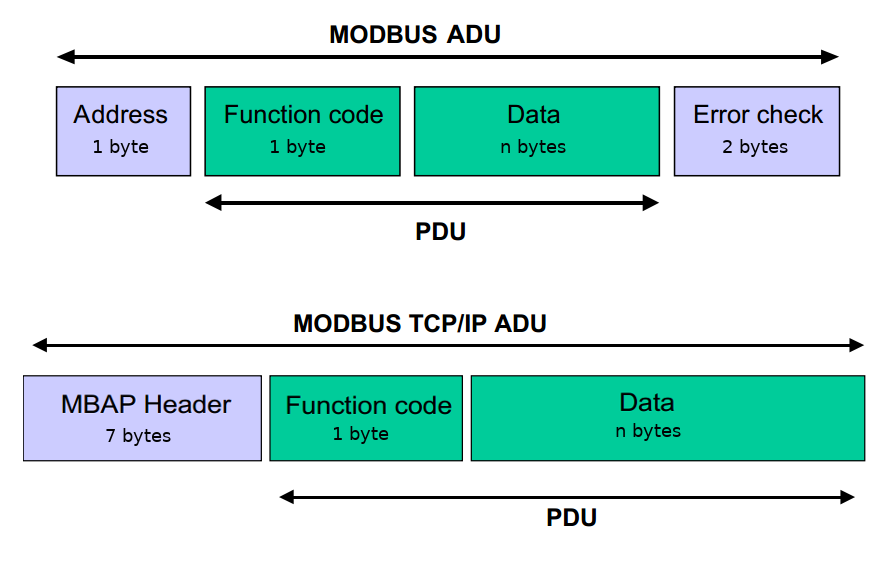 For the PDU to remain independent of the underlying communication layer, it must conform to the size limitations of the original serial specification. This size was 256 bytes for the ADU over RS-485. Thus, the PDU is limited to 256 – 1 address byte and 2 error checking bytes for a total of 253 bytes. Note the address in the ADU is actually the ID of the slave device on the Modbus network.

The data portion of the PDU will contain fields specific to the function code along with the actual data being transmitted. These fields will be discussed in detail later in the article.

In ASCII mode, data is sent as the ASCII characters 0-9 and A-F, while in RTU mode, data is represented in 8-bit binary. Data and addresses are encoded in big-endian, resulting in the most significant byte being transmitted first.

For each type, a maximum of 2^16 (65536) data items can be located in a device's memory. There are specific function codes for accessing each of the different data types, with each type often having its own dedicated block of memory.

With an understanding of how data is represented in Modbus, it is possible to look at a transaction in detail. This will be from the perspective of the PDU, since the PDU is communication-layer-independent.

The master initiates a request by using the function code, while the slave sends a response in reaction to that request. A successful response echoes the function code sent to it by the master. An exception response replies with the same function code but with the msb (most significant bit) set high to indicate something went wrong.

There are a number of function codes defined by the Modbus specification. Function code 0x01 is the Read Coils function.

Figure 4 shows an example of what a Read Coils request and response might look like. The Modbus master sends a request with function code 0x01 (Read Coils) starting at the first data item (address 0x0000) and reading only a single coil. The Read Coils function can be used to read up to 2000 (0x7D0) coils at once. 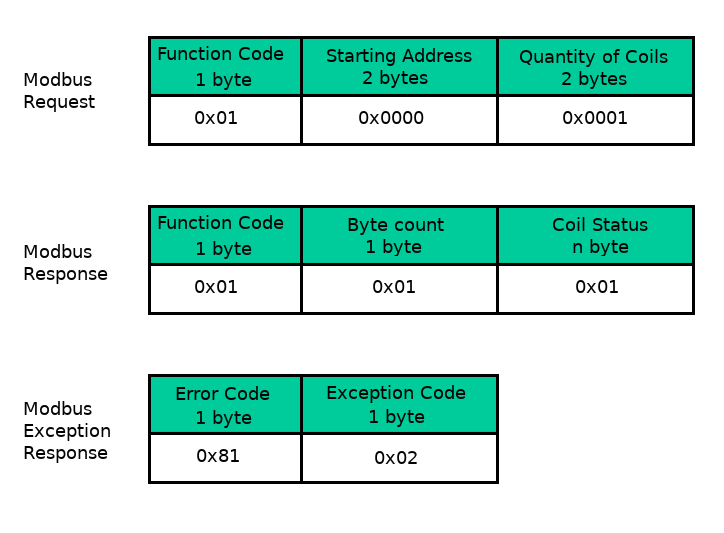 If successful, the slave responds with the same function code and a count of the number of coils it's replying with. The coil status will be n bytes wide with each bit representing whether that particular coil is ON (1) or OFF (0).

In this case, the coil at address 0x0000 is ON. Had the request not been successful, the exception response would contain the function code with the msb set high (0x81) along with an exception code that explains what went wrong. Exception code 0x02 means that an illegal data address was used, i.e., there is no coil at 0x0000 in this slave's memory.

Figure 5 shows an example of a Write Single Register transaction (function code 0x06). Here, the master requests a write of data 0xA0A0 to address 0x00FF. The slave's response is simply an echo of the request.

The example exception response here shows the function code with the msb set high along with an exception code of 0x04. This code means that an unrecoverable error has occurred while the slave was attempting to perform the request. 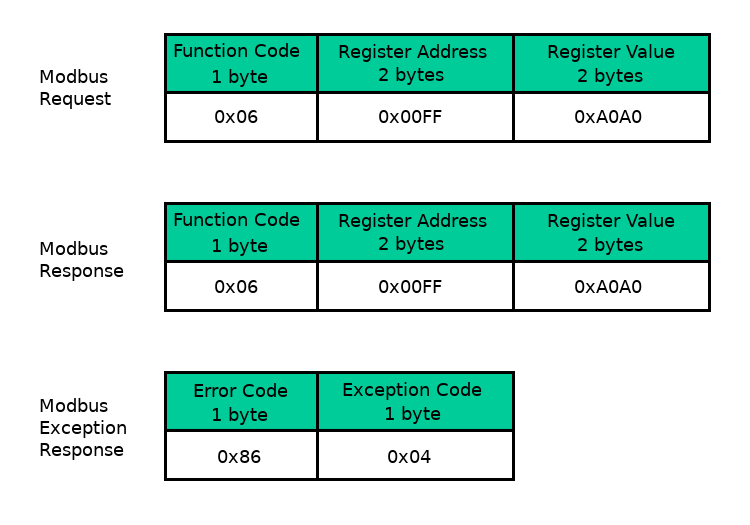 All Modbus function codes follow a similar pattern to the two examples shown above.

Figure 6 shows a list of the common function codes along with exception codes for exception responses. For more information consult the Modbus specification.

This article introduced Modbus. Modbus was invented by Modicon in the late 1970s to allow for communication between their PLCs and devices. This protocol works in a master/slave (client/server) configuration and can be used over a serial connection or through TCP/IP and Ethernet.

Modbus is a de facto standard in the industry today and represents the most widespread royalty-free industrial protocol to date. It can be found throughout plants and factories around the world and despite its age will remain a relevant industrial protocol for years to come.