The RMO cobot’s key features include machine tending through AI and CV (computer vision), customizable 3D-printed grippers, and pre-integrated cloud software such as offline machine learning via the cloud. Utilizing these features, along with their $25,000 annual subscription, Rapid Robotics hopes to keep manufacturing in the U.S. for longer.

Founded in late 2019 by Jordan Kretchmer and Ruddick Lawrence, Rapid Robotics created the RMO cobot to help U.S. manufacturers take on more projects and keep manufacturing in the U.S. longer. The company is headquartered in San Francisco, California, where Lawrence said Rapid Robotics noticed how difficult it could be to find machine operators in the area. 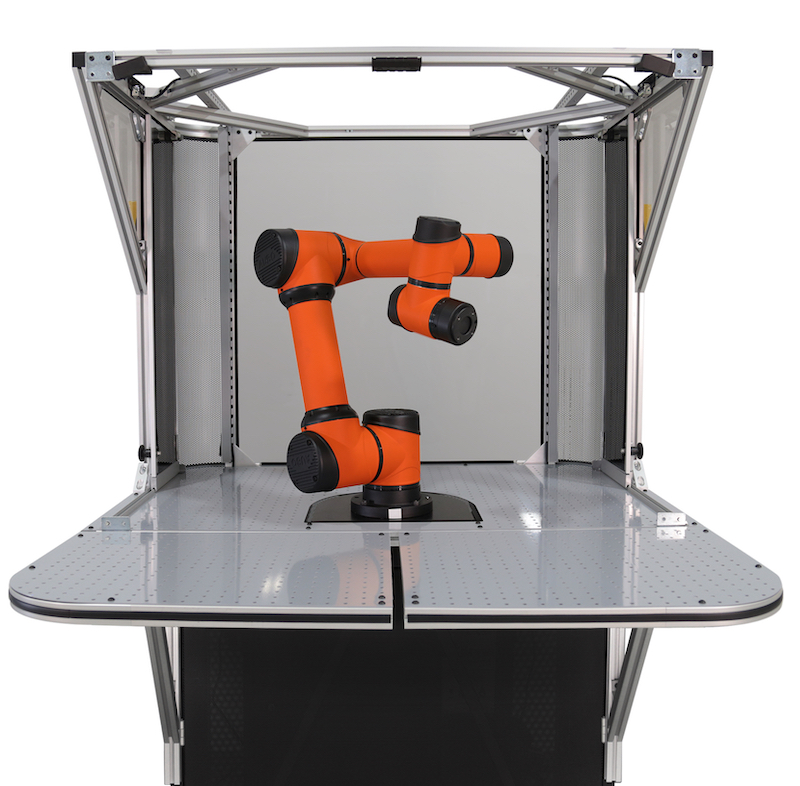 Upon researching, Lawrence noticed it could also be hard to find machine operators and roboticists in other parts of America. Due to the RMO’s pre-integrated software feature, “We’re the robotics experts for them [manufacturers],” said Lawrence.

Companies such as Amazon and READY Robotics noticed a skills gap in robotics and control automation. These two companies sought to close the gap by opening training programs. While Rapid Robotics doesn’t have the workforce to open a training center, they did receive funding to create the RMO.

Part of their funding from Greycroft and Bee Partners stems from U.S. manufacturers struggling to find candidates for over 600,000 open machine operator positions. Offshore manufacturers can conceivably automate more tasks; thus, bringing more automation to U.S. manufacturing through the RMO could potentially close the gap.

Why is Reshoring Important?

"There’s a false narrative that manufacturing in the U.S. is declining. And that's just completely untrue. Demand for U.S. manufacturing has never been higher,” stated Lawrence.

The threat of offshoring can be a top-of-mind problem for U.S. manufacturers. During his Presidency, Biden intends to rebuild U.S. supply chains; on January 25, he issued an executive order to “Buy American.”

Rapid Robotics saw this issue and dove into possible solutions. During their research, they found U.S. manufacturers spend $650 billion on machine tending. Other issues popped up, such as supply chain disruption and a higher demand for machine operators.

Lawrence pursuantly said, “Companies are suddenly realizing the risk of having all of their manufacturing base overseas.” Reshoring could add a strategic advantage to these issues but also adds a higher demand for operators.

According to Rapid Robotics’ website, if U.S. manufacturers automated 80% of their highly repetitive operations, they could compete better with foreign manufacturers.

Collaboration via the RMO

A large focus behind Rapid Robotics’ RMO is collaboration: successful deployment, empowering the company and its customers to work as partners, and offering remote support.

The higher demand for machine operators is a challenging task for U.S. manufacturers to fill because these jobs require employees to do tedious day-in/day-out tasks.

The RMO cobot can be used for various machine tending tasks. Image courtesy of Rapid Robotics.

Rapid Robotics hopes to help manufacturers let their engineers do those more complex tasks by allowing the RMO to complete the tedious ones. Additionally, the RMO was designed to serve as a cobot, thus working with and giving engineers more time in various industries. The RMO’s pre-integrated design intends to be user-friendly with no robot programming training required.

Lawrence also revealed these issues accelerated during COVID-19, with fears about being in groups and within close proximity.

During the pandemic, many manufacturers started moving toward a remote-based system. Lawrence expressed that the RMO “empowers us and our customers to work as partners because we can often see things remotely and understand what's going on.” He continued, “We can actually see the history of the machine, what was happening, and talk to them about how to recover it and move forward from that.”

A Deep Dive into the RMO

When rolling out the RMO to its customers, Rapid Robotics knew success hinged on the presence of these critical characteristics: machine tending using AI and CV, customizable 3D-printed grippers, and pre-integrated cloud software.

Lawrence’s definition of machine tending covers any task involving taking a part, putting it into a machine, and pressing a button to turn the machine on—then, the machine performs a manufacturing task or two before that part needs to be removed. This could be anything from pad printing to putting logos on plastics, from parts inspection to heat stamping.

The RMO utilizes AI and CV to automate machine tending. When asked about its CV, Lawrence noted, “Unless you know what is going on, there’s only so much that a robot arm can be … if it’s not aware of how things are presented or when things change, you’re going to be very limited in terms of what you can do.”

Rapid Robotics’ aim for CV is “to make our system easier and easier to use and more flexible; and then on the other side, to enable new things that it couldn’t do previously.”

Currently, the RMO’s CV helps create shorter motion paths while the AI helps quickly set up workspaces and perform consistently across all robotic arms in the fleet. Instead of moving the robot to a position and telling it to pick something up, the camera can see the item and know to pick it up.

The six-axis RMO cobot comes with a pre-trained arm, which can be used on numerous machine tasks. The arm comes with common fixtures and grippers, but manufacturers can customize the end effectors wherever necessary.

A few of the most common end effectors are suction grippers, parallel grippers, and a two-finger pinching gripper. Rapid Robotics has standard designs for those plus a 3D-printable library.

Rapid Robotics can customize these parts to be bigger or smaller, or even change the cavity size on a curved end effector. Additionally, “our customers all have 3D models of these parts because they are using those 3D models to manufacture them.” This makes the process even faster. Lawrence said, “merge it with our CAD, and we suddenly have an end effector that is ready to go.”

Compared to traditional gripper manufacturing, which could take upwards of days or weeks, 3D printing takes mere hours. Lawrence noted, “It’s really become revolutionary.” It is a rapid process to revise the part or add a new feature.

Cloud technology and AI regularly update the RMO with new capabilities and connect the entire cobot fleet. “Remote support is definitely something that is one of the other powers of having connected robots,” said Lawrence.

“We don't need to have the robot taking all this data and then train all of the computer vision AI to say where something is or how it's oriented on the robot itself. We do that in our cloud, and once it's trained up there, then that model is downloaded to the robot, and then the robot can use it to identify different pieces.”

The RMO uses offline machine learning through its cloud connection to ensure this process. Lawrence summarized this process by saying, “Our AI is not our product. Our AI enables our product.” 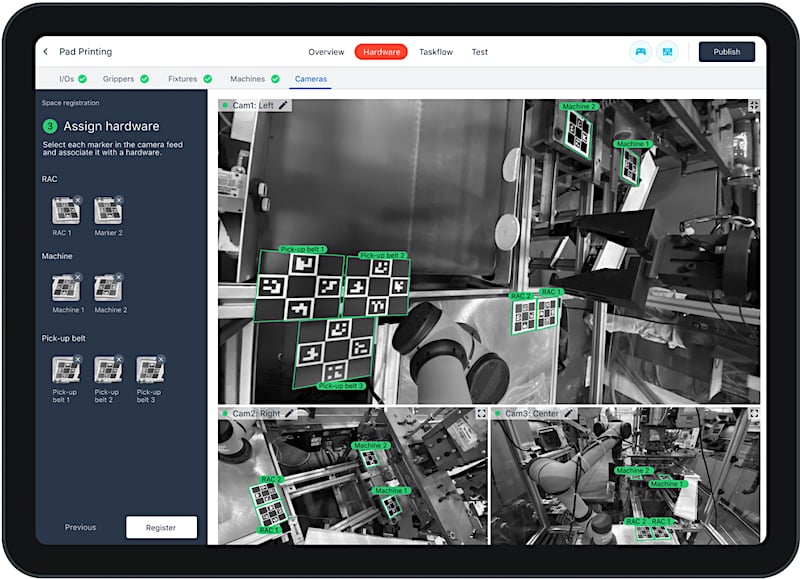 One downside of using the cloud is potential hacking. However, Lawrence said, “We do not allow remote control of the robots.” Additionally, many of the company’s employees come from software backgrounds, and he extended that they use all necessary best practices to ensure system safety.

As Rapid Robotics develops new capabilities, it gets deployed to all cobots across the fleet.

Rapid Robotics’ RMO is most often used in the medical and military industries but can easily be used in automotive, plastics, electronics, and more. Its pre-trained arm is designed to work well in any high-mix environment.

Is your employer looking to reshore their manufacturing facility? Further, could Rapid Robotics’ RMO potentially start closing the automation gap?