What is a UPS?

An uninterruptible power supply (UPS) is a critical component for any application involved with safety systems, data integrity, or redundancy. Many systems that require a consistent power supply will utilize generators that auto-start when the main power fails. However, generators can take time to engage, and so, power may briefly disconnect.

A UPS, however, utilizes an internal battery system that keeps itself charged when the electric grid is available. As soon as the main power is disconnected, the UPS kicks in with virtually no delay, ensuring any connected system remains functional. If backup generators are not present, then a UPS provides power that can be used to trigger a safe shutdown, which preserves data and ensures safety systems are correctly engaged.

As such, the role of a UPS lies in between the main power (electric grid) and backup generators to ensure that power is always available. UPS systems rarely have enough power to continually run a system for extended periods.

The Square D Easy UPS is designed to be easy to install, easy to use, and easy to service, providing three-phase electrics for most industrial and commercial systems. Two separate unit types are available: the 3M and 3S. The 3M is designed for external batteries, while the 3S has internal batteries. Furthermore, the 3M provides a maximum power output of between 50 KVA and 100 KVA, while the 3S has a maximum output power range between 10 KVA and 40 KVA. 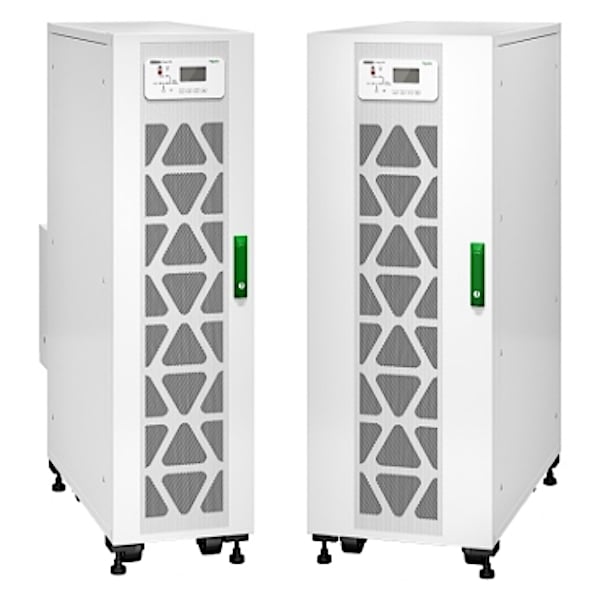 While the 3M does not have internal batteries, it can handle greater power in a smaller profile compared to the 3S. The Square D Easy UPS also includes a loop test to verify performance, provides an efficiency of up to 98%, embedded filters and conformal coating, and compatible with other Schneider Electric products such as modular battery banks.

The Galaxy UPS systems by Schneider Electric are modular and scalable three-phase power systems that are designed with expansion in mind. The Galaxy range is 50% smaller than typical industrial UPS systems, provides up to 99% energy efficiency, and offers output powers from 200 KW to 500 KW. One major feature of the Galaxy UPS range is the live swap that makes the units touch-safe during operation to enable live adjustments, connections, and expansion. Furthermore, the Galaxy UPS range integrates changeable dust filters to protect them from dust build-up.

The first major difference is that the Galaxy range is designed for large-scale modular data centers, whereas the Square D Easy UPS 3S is intended for commercial applications (specifically non-IT) and light industrial applications. 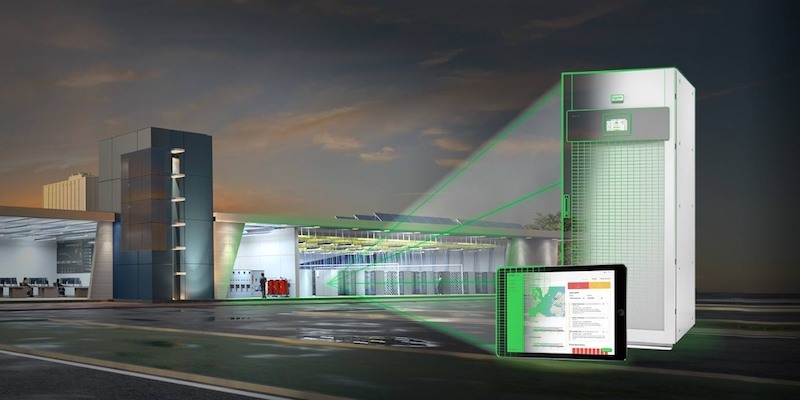 This means that the Square D Easy is easy to set up and configure, but once operating, is usually left alone. The Galaxy, however, allows for on-site personnel to rush and make split-second decisions during the active operation of the UPS (could be caused by unknown events such as a fire or battery failure).

The second major difference is power output; the Galaxy range’s output is far greater than those offered by the Square D Easy. While the power output of the Galaxy is greater, it does not mean that it is ideal for driving heavy industrial equipment. As stated on its product page, the Galaxy is primarily aimed at data center businesses.

With regards to similarity, the only feature that makes these products similar is that they are compact UPSs with high efficiencies. Their power outputs are greatly different, the 3S and 3M provide external/internal battery capabilities, and the Galaxy allows for live configuration.

As such, the 3S and 3M UPSs should only be used in light industrial applications, which could include emergency lighting, PLCs, computing systems holding configuration data, and safety equipment. The Galaxy is primarily aimed at the data center market as well as critical industrial applications such as safety control systems.