UR, one of the leaders in cobot technology, displayed a variety of machine tending and tool-holding applications at the recent trade show, as well as one unique, eye-catching concept cobot.

Universal Robots (UR) has displayed more than 30 collaborative robot applications at Automate 2022 in Detroit, Michigan. Cobots have seen an increase in use in recent years, and UR has worked to meet the needs of its customers with more diverse cobot applications. They have used cobots for applications in TIG and laser welding, something previously too complex for most cobots. They have also expanded into tasks that are difficult to keep employees in, such as machine tending, dispensing, labeling and screwdriving.

UR has had a record-breaking quarter and experienced growth in relation to the need for more cobot systems. Welding is a prime example of exceptional market growth and saw almost 300% growth from the year 2020 to 2021. Cobots are a more recent addition to welding and other heavy tasks, and UR has been at the forefront of their integration into these applications. 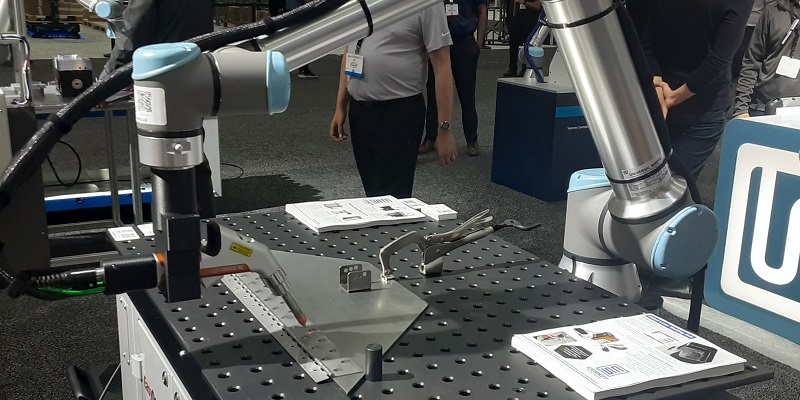 Cobot Systems, a UR Certified Systems Integrator (CSI), has been developing a cobot capable of laser welding. Laser welding has some advantages over other types of welding because it is faster, with less deformation, undercut, and burnthrough. UR CSI Melton Machine & Control Company, has managed to create a cobot capable of TIG welding. TIG welding is useful for many processes and can be used with filler material to create stronger welds. TIG welding cobots have applications for mufflers, kitchen sinks, and other places where welds need to look aesthetically pleasing.

For customers looking to automate a CNC mill, VersaBuilt has designed a cobot application capable of easily automating a CNC workstation and functions as a UR+ certified Mill Automation System. The system includes MultiGrip automation which is capable of workholding automation so machinists can easily add new parts to the system. It comes as a standard automation system and requires no robotic expertise or programming experience to operate properly. 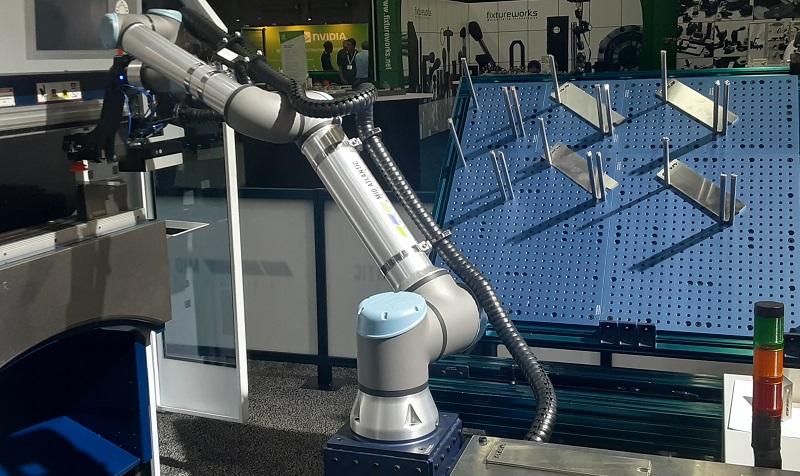 UR, and partner Mid Atlantic Automation, demonstrated a press-brake machine tending operation with a UR model. Image provided by Control.com

UR CSI Kolinahr has managed to place a label inside of a roll core, a difficult task. The system is a robot label applicator capable of placing labels in hard to reach areas, where its human counterparts may face difficulty. In the same area of Automate sits the Robotiq Palletizing Solution, a system that fits easily into many different palletizing scenarios. The palletizer is designed to alleviate workers from repetitive tasks that require heavy lifting. For quality control, UR+ partner 3D Infotech has developed automated robotic inspection solutions. It fits onto a cobot as the UMA Smart Station that will run 3D inspections for different applications.

UR and the “Concept Robot” Model

Normally, when a new robot is introduced to the market, it follows rigorous in-service testing, proof of concept demonstrations, and years of feedback loops to perfect every detail and specification. However, in today’s fast-paced technology landscape, every month of waiting provides lost opportunities for manufacturers. In addition, so much customization is performed with each installation that many standard features can be predicted by the robot manufacturer well in advance. 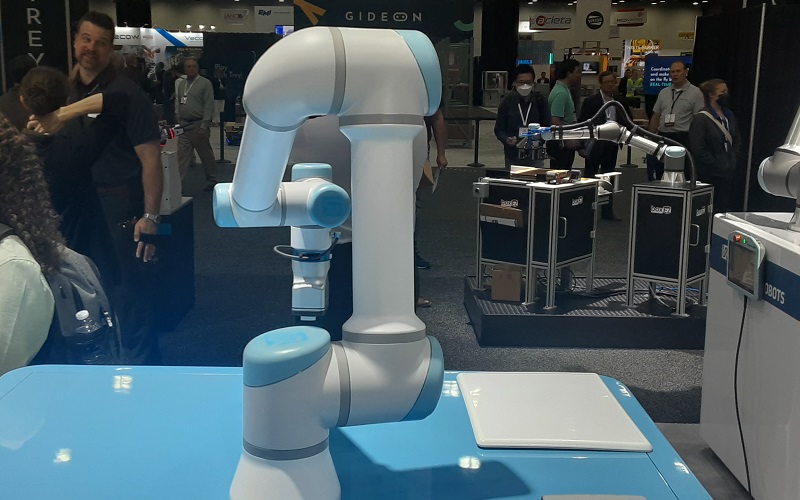 In a stunning new idea, UR displays the pre-production ‘concept’ cobot with re-designed joints and specifications, targeted for inclusion in new industries. Image provided by Control.com

In recognition of this new paradigm, UR has created a ‘concept’ cobot, in a similar fashion to auto manufacturers displaying a concept vehicle before the final production date. This cobot was shown to the audience at Automate 2022, and some unique features can be noted.

First, the joints and motors are contained under more seamless caps with hidden bolts, preventing dust and dirt ingress and contaminant egress. This makes the model more effective for cleaner environments such as electrical assembly or food and beverage. The white color contrasts subtly against UR’s traditional silver linkages, denoting the concept version.