What is Power over Ethernet (PoE), how does it work, and how can industrial facilities benefit?

Power over Ethernet (PoE) transmits electricity over Ethernet cables to power PoE-enabled devices. PoE technology has been around for slightly longer than two decades. In its early days, at the end of the 1990s, PoE was known as power injection.

Power injection provided power over two of standard Ethernet’s unused wires. This technology was generally unreliable because of the lack of safety controls and intelligent management. 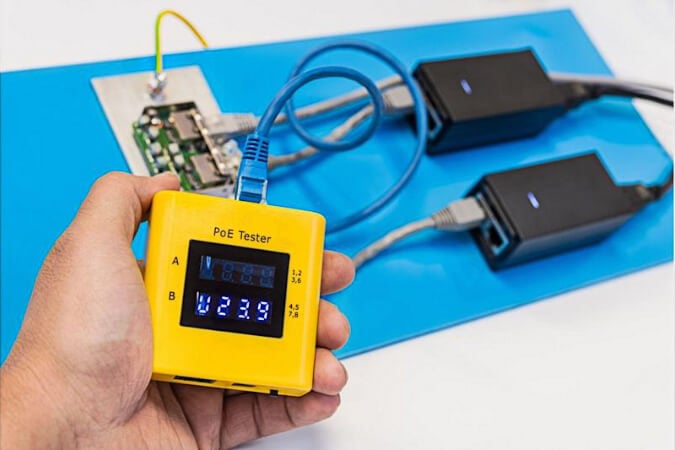 Alternately, Voice Over Internet Protocol (VoIP) telephony was invented in 1995. In the early 2000s, it experienced rapid growth in the general population.

However, in its beginnings, VoIP faced a disadvantage versus traditional landline phones because it needed a separate power supply. Traditional phones have always been powered using the same copper wire used for communications.

Power injection Ethernet cables were first implemented in VoIP phones in 2000, which accelerated the technology’s adoption. Shortly after, other sectors realized the advantages of PoE and began to integrate it into their designs. Two prominent examples are IP security cameras and wireless network access points.

IEEE sought to create a standard for PoE, answering to its rising popularity. The organization released and ratified the 802.3af norm in 2003. This standard allowed for maximum power delivery of 13 W. While sufficient for applications such as VoIP phones and security cameras, it was insufficient for larger industrial devices. 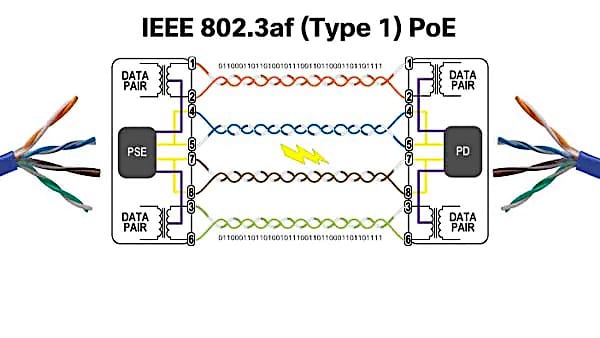 In 2009, IEEE released a new standard called 802.3at, setting the new threshold of power transmission at 25.5 W, effectively covering the entire range of applications. The 802.3at standard is also known as PoE+.

Thanks to IEEE, the industry began to trust PoE. Before these standards, there was a lot of confusion due to the existence of too many proprietary versions of the technology, some of which were unreliable and incompatible.

How Does PoE Work?

In one configuration mode, PoE uses two of the four available pairs of wires to transmit up to 13 W of DC power. The nominal voltage supply is 48 V and 350 mA maximum current. This setup is known as Mode B. 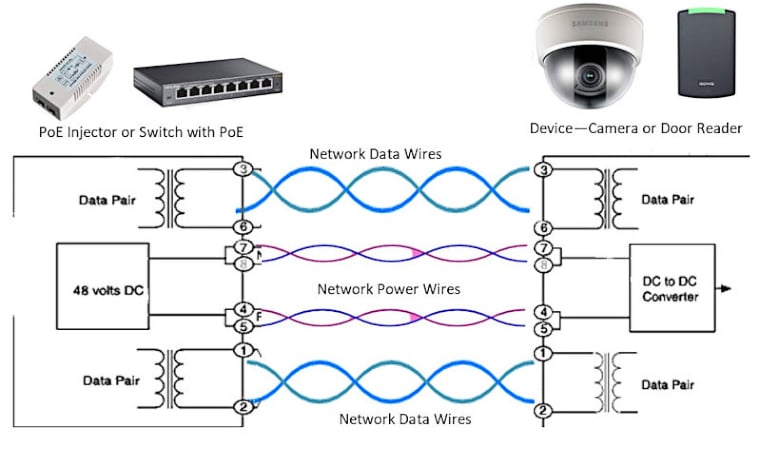 Figure 3. A wiring diagram of Power Over Ethernet configured in Mode B. Image used courtesy of Kintronics

On the other hand, the second option involves sharing the data transmission wires to transmit power. In this case, a common voltage is applied to each pair, different from differential levels used for data transmission, ensuring no interference. This configuration is known as Mode A.

PDs are any hardware components compatible with PoE. The PSE is typically a regulated power supply of a PoE network. A PSE uses a conventional power source, filters and transforms the output, and sends it to the PDs over the Ethernet cable.

During installation, a special handshake between PD and PSE must be completed for the network to work properly. This applies when setting up a brand new PoE network or adding a new PoE-enabled device to an existing network. The handshake consists of a unique signal that each PD sends over the Ethernet cable, which the PSE picks up to confirm the presence of a PoE-compatible component.

Figure 4. Stages of the handshake and power negotiation between PD and PSE, as specified in 802.3. Image used courtesy of Jorge Amodio

After the confirmation, additional message exchanges occur to communicate and validate the correct power level required by the PD. The entire handshake process occurs at very low voltage levels to avoid any damages to the PD, in case it was not a PoE-compatible device.

Flexibility is another factor that improves with PoE. Because components no longer need to be restrained by power outlets, they can be placed at locations previously considered inaccessible. PoE also provides an increased level of safety thanks to the reduction of electrical components that need to be inspected and maintained. One more advantage being explored is the ability to monitor power consumption data and other power-related statistics over the Ethernet.

Due to PoE’s simplicity and cost-efficiency, industrial facilities can benefit from installing it during construction. What do you foresee using PoE for in your facility?