Efficient communication between machines is key in industrial automation. As both Ethernet and wireless network technologies improve, which one is poised to take the lead in the future?

Generally speaking, when talking about new technological concepts, such as the Internet of Things (IoT) and 5G networks, much of the attention focuses on consumer electronics. This is understandable since many of these devices part of most people’s everyday lives are being fundamentally changed. 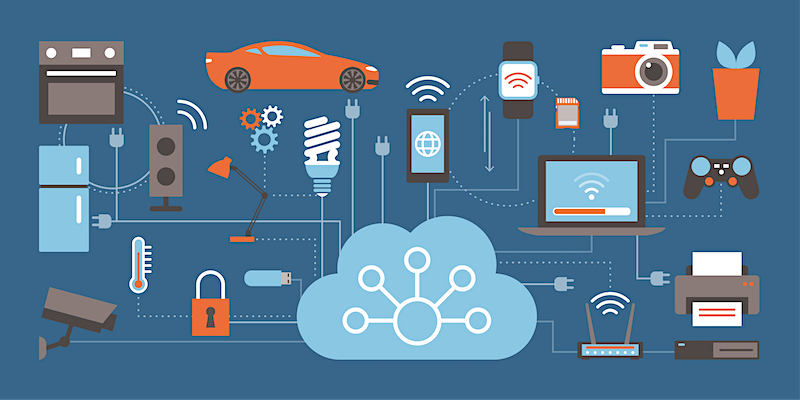 Figure 1. M2M conceives multidisciplinary devices being able to communicate with each other directly. Image used courtesy of Adil Analytics

In many industries, though, a very similar revolution is taking place—one that is transforming factory floors and the way machines communicate, from nearly every point of view: speed, architecture, safety, and principles of operation.

The Ethernet vs. Wireless Race

Before diving into which physical media is best suited for machine-to-machine (M2M) communication, it is helpful to review the historical context, as well as the state-of-the-art of that same media.

Industrial Ethernet refers to any wired Ethernet-based communication. It is also important to remember that the protocol is Ethernet-based, whether wired or wireless physical media. Examples of Ethernet-based protocols are Ethernet/IP, EtherCAT, PROFINET, and WLAN.

Surprisingly, the first network ever created that worked based on some proto concepts of Ethernet was a wireless LAN. This was the Aloha Network, developed in 1971 at the University of Hawaii by professor Norman Abramson. The goal of the Aloha Network was to create a common communications channel for the Hawaiian Islands, relying on radio technology using methods capable of things like collision detection. 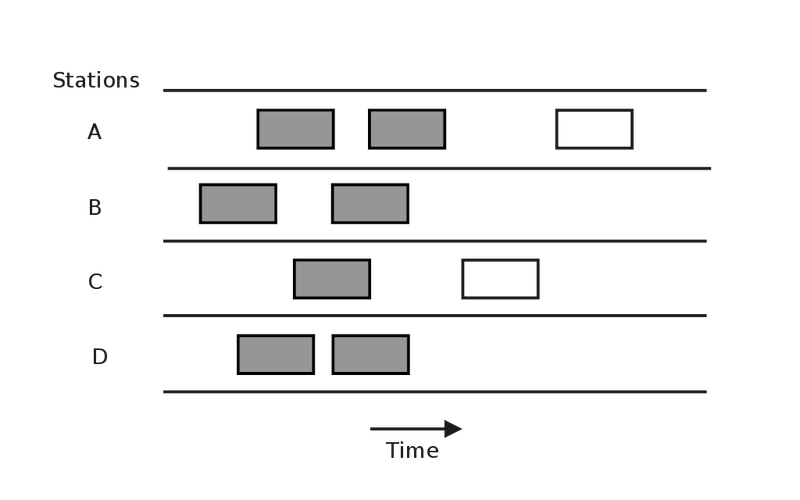 The Aloha experiment was picked up two years later by Robert Metcalfe at the XEROX PARC company, who further developed it. After several proofs of concept, the first Ethernet standard was published in 1980 and, by the end of that same decade, the protocol had already become predominant in communications. This was largely due to the cost-effectiveness of the physical media used—at first, coaxial cable, and then twisted pair.

This was also why wired connections gained popularity much faster than wireless, as the infrastructure needed for wireless communications was prohibitive for most applications back then. Over the next three decades, industrial Ethernet took hold, particularly in factories, buildings, and production facilities where distances were not too large and could be well covered with wired infrastructure. 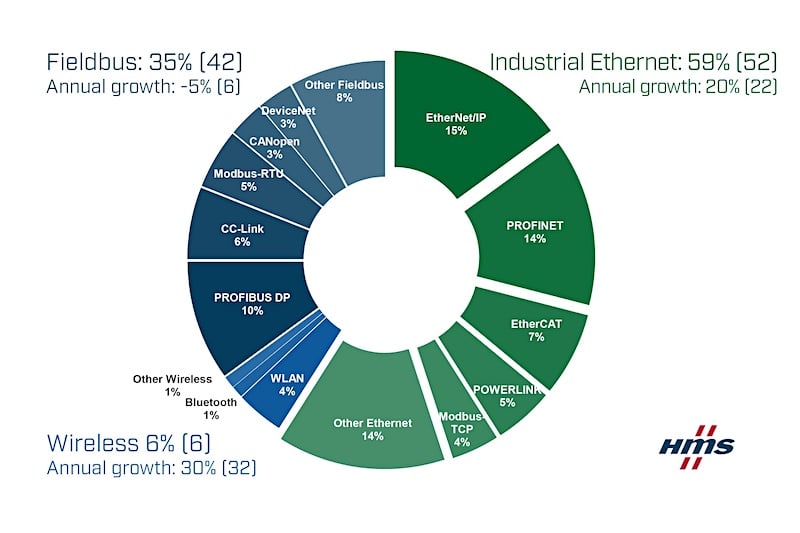 It is important to note, though, that the growth rate of wireless nodes is higher than that of wired nodes (30% vs. 20%). This is a trend that industry experts and system integrators are following very closely, as it serves as an indicator of the growing interest in wireless solutions. This is also possibly linked to the arrival of industrial 5G and early adopters driving the growth.

M2M in industrial settings is often viewed as a synonym of IoT due to the many parallels in philosophy and functionalities. The idea of an M2M network is that, similar to IoT, sensors and other field devices communicate with each other directly. Another school of thought positions SCADA systems as the predecessors of M2M networks.

In essence, an industrial M2M network is very similar to an Ethernet-based network (wired or wireless). Still, it is specifically designed to prioritize the communication between sensors, field devices, controllers, robots, and other machines. M2M networks are proving to be valuable propositions in warehouse automation, utility management, and many manufacturing processes. 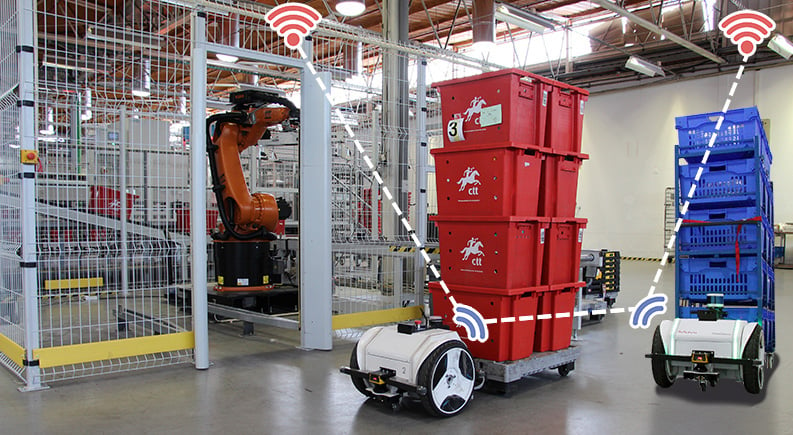 Figure 4. M2M networks are improving the capabilities of autonomous robots in the logistics sector. Image used courtesy of RAJANT

Choosing Between Wired or Wireless

To answer whether to use wired or wireless infrastructure in an M2M network, it is necessary to consider several factors, listed below.

This will, in some cases, dictate the solution. In mobile applications, for example, wireless connections are necessary. In other cases, like factories, the high concentration of devices within a small space could make it a wired-only requirement.

Many production facilities are environments with high sources of electrical pollution that can make it difficult for a wireless network to work efficiently. Electromagnetic noise and physical barriers are some examples of this. On the other hand, there are systems where installing physical connections is risky (and more costly), and thus wireless infrastructure is preferred.

In reality, many automated systems rely on a large network comprised of both wired and wireless network components. As production facilities become more automated, they also become more integrated with higher-level applications (ERP, WMS, MES, SCADA, etc.). When this happens, it is not uncommon to see a mixture of wireless and wired networks at floor-level devices, which are vertically integrated through Ethernet and even optical fiber. 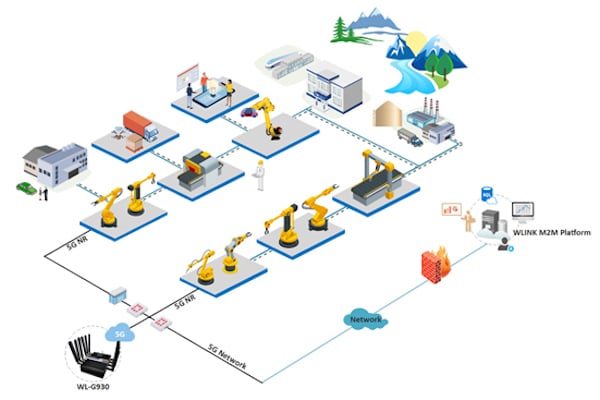 However, we are likely to see changes in how we view these factors in the near future. With the arrival of new technologies such as 5G-TSN (time-sensitive network), the boundaries between wired and wireless connectivity are blurring. Wireless bandwidth rates are fast approaching wired media, minimizing the importance of this once key differentiating factor.

With 5G-TSN, for example, deterministic and time-sensitive communication is achievable over wireless, where it was previously only possible through industrial Ethernet. Although many integrators still follow conventional design criteria deciding for wired infrastructure, emerging trends and new technologies are likely to shift that school of thought, and we could probably see wireless M2M networks taking over the sector in a not-so-distant future.