How MQTT is Used for Industrial Automation

How MQTT is Used for Industrial Automation

Learn about the background and use of message queue telemetry transport (MQTT) in the industrial automation industry.

MQTT was developed in 1999 by Andy Stanford-Clark with IBM and Arlen Nipper to connect measuring devices on oil pipelines to their SCADA (Supervisory Control and Data Acquisition) system via satellites. They developed this protocol because they needed something lightweight, bandwidth resourceful, and consumed little power to go through the satellite links.

In 2014, MQTT officially became an OASIS (Organization for the Advancement of Structured Information Standards) open standard. It was aimed to stay as an open-source implementation to ensure wide adoption in the machine-to-machine (M2M) industry.

Today, MQTT has been adopted in many industrial sectors, including automotive, utilities, logistics, manufacturing, smart home, consumer products, and transportation, linking up millions of devices around the globe.

MQTT, which stands for message queue telemetry transport, is a communication protocol that uses a publish/subscribe (PubSub) model for the Internet of Things (IoT) and Industry 4.0. It is very lightweight, performs on top of the TCP/IP stack, and is designed for connecting distributed devices that require minimal coding by the developers.

MQTT is bandwidth-efficient and is not resource-intensive. It can also run on secure sockets layer (SSL)/transport layer security (TLS)—a secure protocol built on TCP/IP—to ensure that all data messaging among devices are encrypted and secure.

In the MQTT PubSub model, the clients are either message producer (publisher) or consumer (subscriber). The clients do not establish a direct link between each other and do not know each other’s location or IP address. Instead, they both connect to an MQTT broker, which merely acts as a traffic (messages) store and director, as indicated in Figure 1. 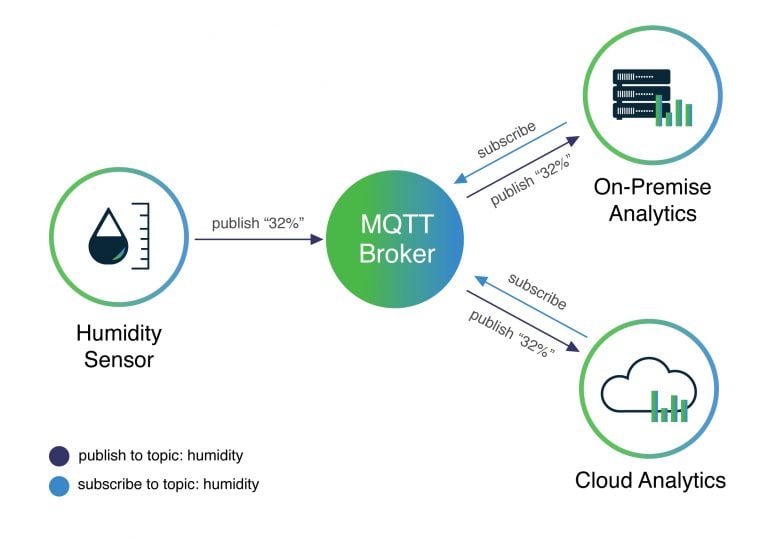 In this example, there are one publisher and two subscribers subscribed to the same publisher getting the same information. In many applications, however, many-to-many relationships are often seen, as described in Figure 2.

In MQTT, the topic refers to a hierarchical UTF-8 text string that the broker uses to filter and funnel messages to each subscriber. The topic consists of one or more topic levels, and a forward slash delimits each topic level. All messages must contain a topic, and the subscriber must subscribe to the topic. Examples of topics are presented in the following formats (it is important to note that the topic is case-sensitive).

MQTT is a messaging protocol that supports asynchronous communication. It decouples the message producer and consumer in space by only knowing the broker’s IP address and port number to publish or subscribe. It also decouples the time by storing the message for clients when the network is disconnected. This makes the protocol very scalable in unstable networks such as cellular and radio networks.

MQTT sends connection credentials in plain text and therefore does not provide security measures and authentication itself. This is remedied by using TLS encryption with username, password-protected connections, and requiring the clients to provide a certificate that matches the broker’s certificate.

The default unencrypted MQTT port is 1883. The encrypted port is 8883.

Quality of service (QoS) in MQTT is an agreement between the publisher and subscriber on the guarantee of delivering the message.

There are three levels of QoS:

When the publisher publishes a message to an MQTT broker, it determines the QoS level for that message. When the broker forwards the message to a subscriber, it also sends the same QoS set by the publisher.

Level 0 puts less burden on the bandwidth and is used when the connection is considered reliable. Using the highest level 2 guarantees delivery, but it puts more loads on the data transfer.

Eclipse Foundation manages a Sparkplug protocol specification that is compatible with MQTT, in which MQTT is the communication protocol and Sparkplug defines the data structure. The specification is chosen for real-time and mission-critical industrial applications by adding new requirements and features on top of MQTT.

Sparkplug B adds three main requirements to the MQTT implementations:

MQTT is cross-platform. The broker can be installed and run on Windows, Linux, and other platforms. Going forward, an increasing number of installations will be running in cloud servers such as Azure and Google Cloud. Hosting the broker on the cloud allows developers to start quickly, manage and monitor the broker easily, and scale up when more devices are required to be connected.

Security becomes even more important when data is going through the cloud. Developers must pay attention and configure and handle the secure connection, authentication, authorization, and encryption properly to maintain the security and integrity of the data.

Developed in 1999 to connect oil pipelines to SCADA, MQTT has always been used in industrial settings. It is a communication protocol used in various industrial industries. What have you used MQTT for?