In this article, learn the basics of Allen-Bradley Data Highway, the various network structures, and the relationship between DH and Ethernet networks.

Data Highway was developed by Allen Bradley in the late 1970s as a proprietary network bus used to connect PLCs, remote IO systems, PCs, and HMls. There is a broad range of controllers and hardware devices that can be integrated into a DH network, including PLC5 Processor, PLC3 Processor, Windows PC, ControlLogix PLC, PanelView HMI. DH networks are robust and capable. Let's dig into DH networks and learn the basic rundown of their operation. 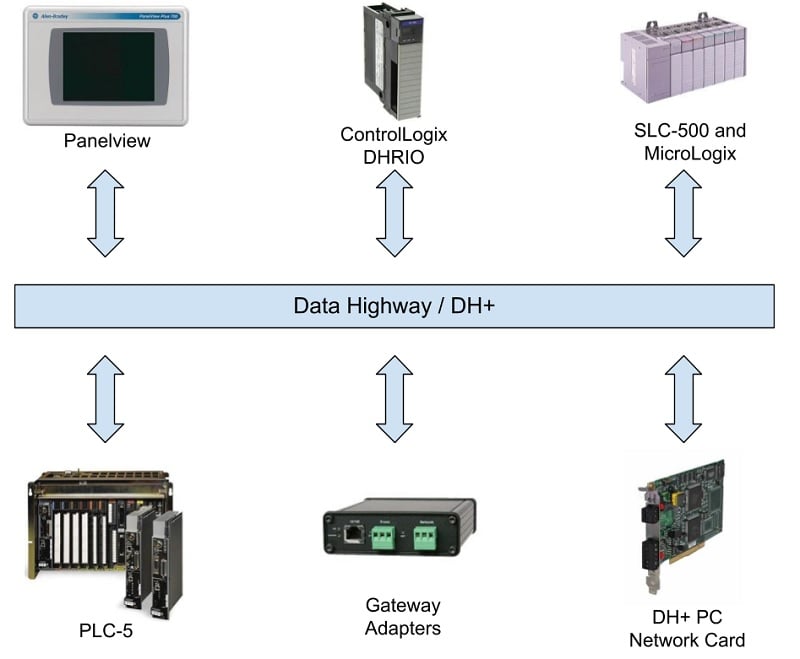 Figure 1. Many different types of devices can be connected across a Data Highway network.

There are several different kinds of Data Highway networks: Data Highway (DH), Data Highway Plus (DH+), Data Highway II (DHII), and Data Highway-485 (DH485). DH and DH+ are similar because they use the same type of physical media and construction principles. The main difference between DH and DH+ is the communication method. DHII utilizes coaxial cable, while DH and DH+ utilize twinaxial cable. While both types of cable are used for data transmission, coaxial cable offers better noise protection at long distances, while twinaxial is better suited for short-range high-frequency applications. DH485 uses a cable that supports the RS485 communication protocol. Of all the Data Highways, the one you are likely to see most is the DH+ network. More in-depth information, including network wiring instructions, can be found in the Allen-Bradley Data Highway Installation Manual.

In nearly every industrial facility built before 2000 that I have maintained in my career, I have seen a DH+ network somewhere inside. I have always been a proponent of ethernet networks, but I cannot discount some distinct advantages of the DH+ network.

Let's start by going over how the networks communicate. Each networked device is called an individual ‘node’. Each node must have its own number so that it can be differentiated from other devices. DH uses a system called Floating Master to send out data to the other nodes. This allows critical nodes to get onto the network more quickly than others. All other versions, DH+, DHII, and DH485, use token passing. This is a system in which, after one node finishes with its data, it hands priority off to the next highest node in line.

The data rate on a DH network is relatively slow compared to modern networks, but this is countered with shorter data packets. Throughout computer networking, this ‘packet’ is the term for the collection of address, configuration, and actual data bits that are sent between devices. As the number of nodes in a network increases, the time between consecutive readings of each device will increase. This time delay should be seriously considered in many systems where safety or instant response must be required. The rate of data transmission can be increased in most cases, but often at the expense of decreasing maximum cable lengths.

These networks have a maximum of 64 devices that can be on them at any given time. This limits them to a smaller scale than other networks like Ethernet. Ethernet networks are typically more complex than Data Highway networks. IP Addresses, Subnet Masks, Gateways, all of which require a computer to talk to them and identify their configuration. Data Highway devices are usually able to be configured more easily through the software that is already available on a programmer's computer. Others are even better because they have DIP (dual inline pins) switch banks or rotational switches that can be identified in the field with no computer at all. 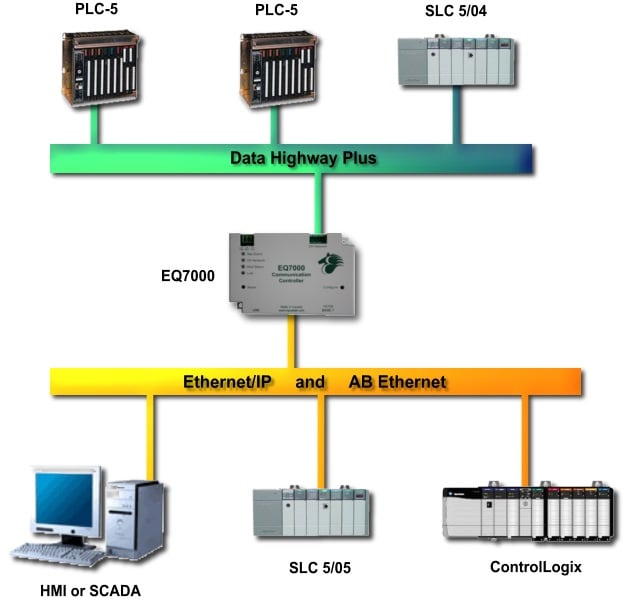 Data Highway Plus (DH+), which is most prevalent, still has its place as a closed communication system and you are likely to see them if you work on facilities that were designed before the advent of more advanced standardized networks. In some scenarios, its advantages over the more complex ethernet networks can prove to be valuable in a multitude of ways.

To provide the contrasting perspective, Ethernet certainly has some distinct advantages over DH and other legacy protocols due to its universal adoption. It is difficult to find modern control equipment that is incompatible with an Ethernet system. Therefore, in order to interface with these older pieces of equipment, a variety of network adapters, or gateways (sometimes called bridges), must be used. An example of such a network is shown above in Figure 2. With the understanding of this compatibility challenge between modern and legacy protocols, many equipment manufacturers will provide a whole variety of I/O and network ports onto a single device, allowing the user to integrate it into nearly any network.

Data Highway networks, despite being developed in the early days of industrial computer automation, are still common throughout industry. These networks, along with adapters to modern protocols, allow new and old systems to work hand in hand in the most convenient ways possible.

In following articles, we will begin to discuss how these networks are utilized in the field and how to begin upgrading them if you are ready to take the next step toward an integrated facility.