This article teaches the basics of gateways in industrial networks and PLC-to-PLC communication.

What is a Gateway?

A gateway is a hardware device that serves three primary purposes: connectivity, translation, and security. A gateway is a managed point of interconnection between two separate networks. It permits or denies data packets to flow from one network to another based on preconfigured settings.

A gateway device also translates information from one protocol to another. This particular feature sets gateways apart from other tools, such as firewalls. Finally, by acting as the single point of entry to a network, a gateway can provide an added level of security to networking infrastructure.

The first gateway devices were introduced in the early 1970s, together with the first long-distance computer networks. The most prominent examples of such networks are ARPANET and ALOHANET.

With the transition to the TCP/IP protocol in the 1980s, computer networks went from scientific test status to enterprise and general population use. The TCP/IP protocol simplified and standardized communications between computers and, with this, network gateways evolved to what we now know as modems and routers.

Nowadays, the most popular form of a gateway is found in every home with internet access. These devices are more commonly referred to as modems or routers, although these are technically distinct functions combined into a single device. In other words, a gateway is a combined modem and router.

The modem function of the device is the interface that allows the connection between a home network and an internet service provider (ISP). The modem can receive analog or digital signals, depending on the transmission media, and convert them to data a computer can interpret. The router function manages the inbound and outbound data packets, redirects them appropriately, or restricts them if they are deemed suspicious.

Most of us have seen the default gateway setting on personal computers. This is where the IP address of the network is configured, manually or automatically. It tells the computer where to direct all information; without it, there would be no access to the internet, and the network would be isolated.

An industrial gateway is a hardware device designed with the ruggedness needed to withstand industrial environments. Just like other gateway devices, an industrial gateway manages traffic between otherwise isolated networks and subnetworks (subnets). Typically, the gateway controls the flow of information between floor-level devices and the outside world, as shown in figure 3.

Industrial gateways also perform protocol translation, enabling the communication between disparate interfaces. Protocol translation allows non-Ethernet-based components to be part of the industrial network and reach the outside world. This is one of the bases of the infrastructure needed in cloud-based solutions and IoT. Besides TCP/IP, some of the protocols that modern industrial gateways can work with are UDP (User Datagram Protocol), PROFINET, OPC-UA, and Modbus. 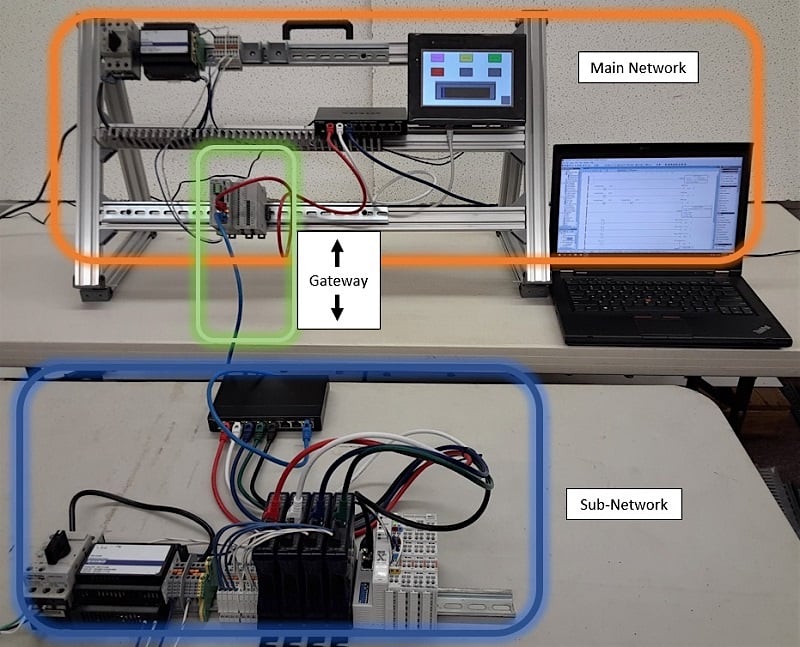 The gateway device packages information encoded in different protocols so it can safely and reliably transmit outwards. Similarly, it directs incoming data packets to the appropriate destination within the subnetwork. Industrial gateways can also process data between devices in the same local network.

“Gateway to the Future”: IoT Gateways

In addition to the standard gateway functions, IoT gateways can collect and aggregate data to communicate it to cloud data centers. Rather than simply directing information traffic, IoT gateways can be programmed to decide what specific control systems information should be sent outwards and with what format.

IoT gateways can collect information directly from field devices or poll it from a central controller, such as a programmable logic controller (PLC).

For PLC-to-PLC communication, gateways serve protocol translation and interfacing purposes. Each major PLC brand in the market has a proprietary protocol to communicate via Ethernet. Although many new systems are designed with a standard controls vendor in mind, it is still common to find systems where different controllers coexist and need to communicate with each other, particularly in brownfield installations. In these cases, PLC gateways are essential devices that establish communication between two disparate protocols.

There are dual-protocol and multi-protocol gateway devices. The dual-protocol allows the communication between only two protocols, while multi-protocol gateways can be configured for more protocol options. Siemens PROFINET, Allen-Bradley Ethernet/IP, OPC-UA, and Omron Ethernet/IP are some of the many protocols that can be interfaced using a PLC gateway. In addition, non-Ethernet protocols can also be interconnected using a gateway. These include AS-interface (AS-I), Profibus, and Modbus.

When retrofitting existing control systems, gateways are a necessary device to utilize. Due to their ability to connect multiple protocols and networks, they can help connect legacy systems with newer, IoT-enabled devices.

How do you use gateways in your control system?