Choosing an Interface: Why Modbus is Still Around After 40 Years

Choosing an Interface: Why Modbus is Still Around After 40 Years

Learn about the advantages of Modbus over newer protocols when choosing an interface with third-party devices.

Modbus was developed by the PLC manufacturer Modicon (now Schneider Electric) in 1979 as a communications protocol for use with their PLC line. Since then, Modbus has been adopted by thousands of manufacturers and used in the process control and automation industry as a staple in their communications arsenal.

In 2004, the development and support of the Modbus protocol was taken over by the Modbus Organization, a non-profit member-based organization developed to support and promote the protocol.

Modbus is an open serial protocol based on a multi-drop client/server architecture. In a typical Modbus network, one server communicates with up to 247 clients using either a 2-wire topology or a 4-wire topology in accordance with EIA/TIA-485 standard. Modbus may also be used in a point-to-point (1 server to 1 client) using RS-232 (EIA/TIA-232 standard) wiring.

Since its inception, the Modbus protocol has continued to evolve, and variations and advanced versions have been developed. The original serial Modbus protocols used are more specifically known as Modbus RTU and Modbus ASCII. Other variants, including (but not limited to) those that support communications over Ethernet are the following:

Each variant brings something new to the standard with advantages in reliability, speed, or distance. This article will primarily focus on Modbus RTU and Modbus TCP/IP, as they seem to be the most abundant in use today.

When an automation or controls engineer needs to connect a plant or facility’s control system to a third-party device, there are typically a few options at hand. When the third-party device is another control system—a single device such as a motor drive, or even a network of multiple devices such as drives, instruments, or other equipment—some form of Modbus is typically an option for interfacing the components. 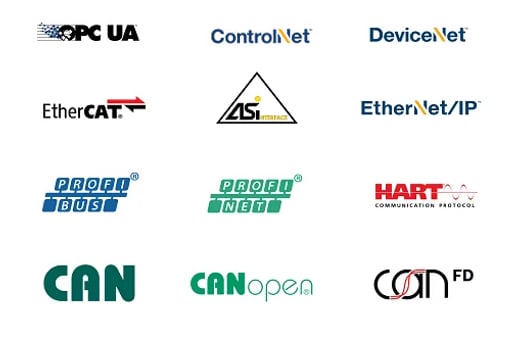 When Modbus first came out in the late 1970s, there were not many communications alternatives around. If there were an alternative, it was proprietary and not open source. Today, there are dozens of industrial communications protocols around with a growing open-source trend.

Why is Modbus so Popular?

Developers and manufacturers have discovered that open protocols allow more devices to be embedded, making a control system more valuable and attractive as it can connect with more devices.

While there are many alternatives to Modbus, not all communications protocols are interchangeable. Below are a few industrial automation communication protocols:

While Modbus has been around for a while, it has several advantages over newer communications protocols available today.

One advantage of Modbus is how widely available it is for modern control systems. With the different protocols on the market today, Modbus is considered the most available on the market. Almost every industrial automation device with a communications channel can be purchased with either Modbus RTU, ASCII, or Modbus TCP/IP. Many times, Modbus even comes standard with the device.

The simplicity of the protocol is another reason some may choose Modbus as an interface on a new control system today. When collaborating and designing an interface to other control systems, I have run across many that immediately suggest OPC as the interface of choice, as it is open. Like Modbus, OPC is available on a variety of devices.

I have installed both OPC and Modbus on interfaces in the past, and Modbus is the simplest and most reliable of the two.

OPC, which is also server/client-based, usually consists of the server being installed on a personal computer running some version of Windows. Where Modbus, by contrast, is strictly on industrial hardened devices with no reliance on the Windows operating system, its layers of security, and DCOM configuration nightmares.

I am not certain of the future of Modbus and how long it will be around, but I would be willing to bet it will outlive my control system career and be here for at least the next generation to use.  Modbus may continue to be a “go-to” interface for years to come.