Ethernet is everywhere. It’s simple and easy to use, so why are DeviceNet and ControlNet still here?

This is a greatly debated topic between engineers, so the following will offer a surface-level look at some of the differences between DeviceNet and ControlNet and why Ethernet/IP may dominate, but may never fully take over the industry.

As technology such as Industry 4.0 and the IIoT market grows, it is important to understand what is happening between the devices that deliver value to a production line. Start with getting to know what resources are currently available in different areas of a factory such as power and network availability.

If something isn't broken, why fix it? An initial thought when working with legacy equipment or network is to replace it with the latest and greatest. However, older equipment might not be able to communicate or even plug into modern networks. Which technology is best; it depends. Like many solutions, engineers find niche applications that result in using multiple technologies to provide the greatest value. Before throwing out old systems, make sure an upgrade is even necessary. There are solutions that bridge older technologies to newer devices and networks.

Many companies just starting a digital transformation plan might only be looking for data to see where a connected device or advanced automation would offer the greatest ROI. This might require multiple sensors or simple devices that need two things; a connection and power. 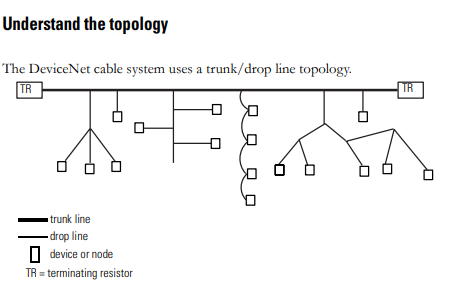 DeviceNet offers power and signal in a single cable to connect up to 64 devices that each have a specific node address. Power and signal in one cable can save on cost. Additionally, a trunk and drop line architecture make integrating new devices relatively easy compared to Ethernet/IP which often requires individual wires for each device. Additionally, DeviceNet’s architecture and individual node addresses work well for maintenance and troubleshooting.

Data from Rockwell Automation Design and Installation Guide for DeviceNet. While limited on bandwidth and distance, DeviceNet still works well for connecting devices. Many sensors don’t require a large bandwidth or high-speed.

The cumulative drop line length, thick or thin, can not exceed the maximum length allowed for the data rate used.

This network is a quick and affordable way to connect simple IIoT devices and sensors on a relatively local network. Companies starting to connect processes and production lines can use DeviceNet, but need to keep in mind its digital transformation plans to scale. If distance or data rates become limiting, DeviceNet can work with other networks, such as Ethernet/IP. For example, Anybus X-Gateway connects DeviceNet devices or networks to many other Fieldbus or industrial Ethernet networks.

DeviceNet can also work with ControlNet. Both ControlNet and DeviceNet are managed by Open DeviceNet Vendor Association, known as ODVA. They have the same 7 common layers Common Industrial Protocol (CIP) known as the Open System Interconnection (OSI) Model.

But ControlNet can connect up to 99 devices and offers faster data rates. If DeviceNet is for companies looking for data to start a digital transformation and find where more connected solutions are needed, the network those time-sensitive and advanced automation devices could operate on is ControlNet.

ControlNet can use fiber optics, operate up to 1000 meters without a repeater, connect up to 99 devices, has data transfer rates of 5 Mbps, and offers multiple topologies. This network uses a logical token ring or token-passing BUS control network. 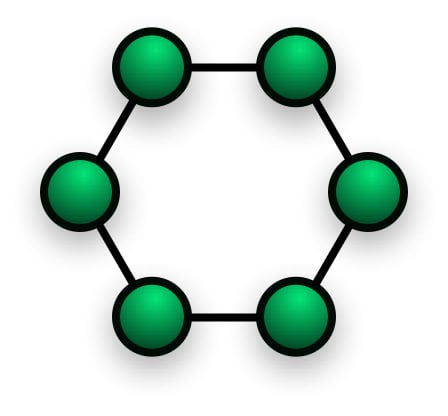 Each node (circle around the ring) has an ID and knows the address of the node before and after it in the ring. The token transmits data frames around this ring until the end of its transfer or it reaches a set time limit.

The timing is set by the network update time (NUT) that can be set between 2 to 100 ms and is made up of three parts: scheduled, unscheduled, and guardband. Scheduled service time will communicate with each node. If a node has no data to transfer it will still send a short message to show it is still transmitting. Without this communication, a provision in the ControlNet protocol will regenerate the token and send it to the next node in the ring.

There are different tools for different solutions. Ethernet is widely adopted, easy to use, and offers the greatest bandwidth. However, cost, ease of integration, speed, and time-sensitive applications will keep DeviceNet and ControlNet around, if only in niche and legacy production, for a bit longer. More importantly, it proves the engineering response to everything, whether what widget is better or what’s the best network, still remains - it depends.