Learn about CATIA, a CAD software program used for parametric modeling, and how it can improve automated processes.

Automation is a process of embedding decision-making into inanimate objects. Here, objects can be physical (hardware) or virtual (software). For example:

Both types of automation are enabled by software.

Every software has a core engine with functions dedicated to executing tasks. Nowadays, most software tools expose some of their internal functions to be triggered and controlled externally. These are known as application programming interfaces (APIs).

Tedious design tasks requiring a series of setups or repetitive tasks can be automated through CATIA’s macros. A macro is a series of functions written in a scripting language. Proper macros setup can save time and reduce time-consuming errors.

Catia uses three main macro languages that can directly affect the design elements within the program. All versions after Catia V5R8 support macros created by the following scripts.

When writing a script, users (developers) cannot create abstract concepts. They are limited to using the system's existing concepts. For example, it is not possible to develop a rounded-corner polygon object. Users will need to construct that as a series of line segments and arcs.

Instead of creating complicated parts or systems from the ground up, scripts give engineers the option to create and save macros as custom design building blocks in a macro library to use across team members or projects.

That said, CATIA supports creating custom features and assemblies that can be augmented with such scripts. This enables building self-configuring objects, the cornerstone for knowledge-based engineering (KBE) workflows. The language CATIA provides for this level of automation is the enterprise knowledge language (EKL).

With CATIA V5, users can access and implement macros from separate compiled coding languages, such as Python on Windows. Python is free software that is becoming more commonplace in industrial automation.

With the combination of Pywin32 and Python for Windows, users can create small intractable applications that can be called upon by macros in the Catia system. For specific Catia language in Python, it is necessary that Python is bound to the Catia V5 Interfaces Object Library.

At this level, users can tap into system services and connect with other APIs. For example, you can export and import the coordinates of a point grid to and from a CSV/Excel file.

Another area of automation is optimization. At this time, CATIA supports only single-objective optimization. Users define sets of free variables that can be controlled by the optimization algorithm (selected from a set of predefined ones). They can also impose constraints and ranges to guide the optimization tool through the solving process to filter and narrow the solution space.

How CATIA Can Optimize Automated Processes

The above three levels (macros, coding, and optimization) can orchestrate robotic arms simulations for fabrication pipelines.

For example, let's say an engineer must design motion paths for x number of robots to carry metal panels from a carousel, lay them down on a welding jig, perform welds, and then transport them back to another carousel. This process can benefit from automation to analyze and optimize execution times. Shaving a second off an assembly station could have significant cost savings (a major driver in automation), especially when producing at scale. 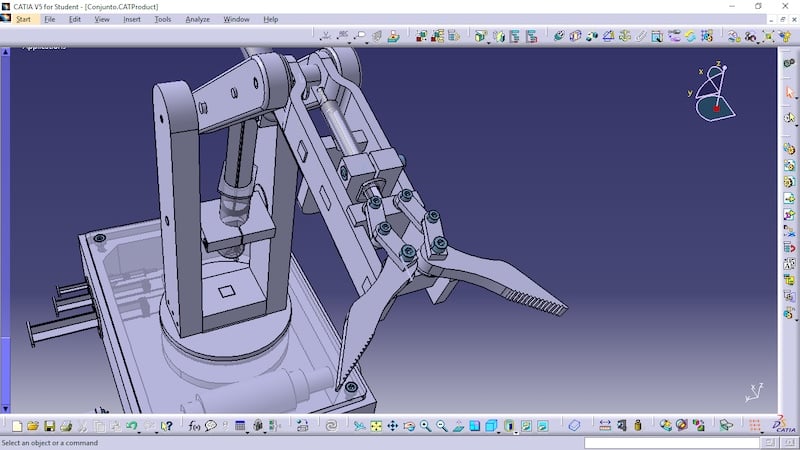 Figure 2. A rendering of a hydraulic arm in the CATIA interface. Image used courtesy of Dassault Systemes 3DS Academy.

Automation must also consider quality and standards. It is possible to augment the process of creating and storing CATIA objects (i.e., data) with a set of business rules to ensure specific standards are met.

For example, engineers can control naming conventions, validate parameters and descriptions to ensure they are correctly filled and valuated, flag issues with model organization, etc., all within CATIA.

Like other parametric CAD tools, CATIA builds relationships between elements top-down to ensure data integrity and prevent cycles. For example, data flow from A to B. Never will it flow back from B to A. This nature is protected by restricting most of the execution tasks to being synchronous: proceed to the next step once the current one is completed. This ensures that data are never accessed by more than one process at any given moment.

I think of automation in parametric modeling systems as a subset of programming. One that is disciplined by synchronous execution and empowered intelligent objects.

Do you have experience with CATIA? Have you used parametric modeling to optimize a system before? Share your experiences in the comments below.