Get to know the hows and whys of choosing the proper start-up method of motors in different applications.

There are many methods of starting motors, with the most basic consisting of directly switching voltage to the input wires. Simplicity is not always preferred since this abrupt voltage change can lead to various problems. More advanced starting methods provide a variety of ways to reduce these problems.

As with nearly every situation in life, the more complex and advanced a task becomes, the more money it costs to accomplish that task. This is also very true in the area of motor control — some methods of control are very expensive and require a steep learning curve. Why then would it be preferable to install such a complex system when a simpler one will still function? Several reasons.

The main reason for looking into alternative control methods is the amount of current required to abruptly start a motor. This is called in-rush current, and it can be measured by many clamp style multimeters that have a button appropriately labeled “in-rush.” This current value can be up to three or four times higher than the normal operating current of the motor, although it depends on many supply and load factors. Obviously, that is an amount that shouldn’t be ignored.

The first is the heat caused by excess current which can cause premature failure of the windings. The wires that make up the coils are covered with thin, heat-resistant insulation. If that insulation breaks down, it can fuse several of the windings together. This will reduce the overall resistance (shorter total wire length in the coils), and further raise the current. The heat will continue to rise in a cascading effect until the coils are completely burned out.

The second detrimental effect resulting from excess current is the increased cost from the part of the electricity bill for large industrial facilities called the “demand charge” which looks for the maximum amount of electricity used in short time intervals as opposed to a total accumulation over a billing cycle. If the motors are allowed to abruptly turn on, consuming massive amounts of current, that demand charge will be much higher. Reducing that in-rush current even by half can add up to huge electricity savings — often more than it costs to install the equipment in the first place.

The DOL method is so simple that there really isn’t a wide variety of different components that form the DOL starting system. A main three-phase supply is wired into the circuit usually through a circuit breaker or fused disconnect with a manual handle. The power is sent through a contactor on its way to the motor. Often this contactor may be paired with an overload relay, but this is the entire extent of the direct on-line method. 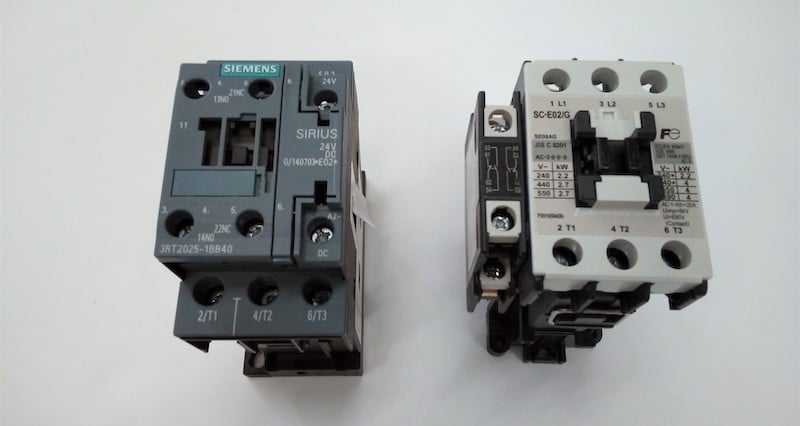 The contactor coil is controlled by a pushbutton or selector switch circuit running at a lower voltage. The only more complex variation exists when two contactors are ganged together with interlocked coils so that only one may be activated at a time. This can reverse the motor.

Again, the disadvantage of these DOL starting systems is the abrupt nature of starting which causes the high in-rush current.

There is a good reason that DOL starting was the only method available for many decades of early control systems. The components that allow a soft starter to control the speed are based on solid-state (usually silicon) devices, which weren’t invented until the mid-20th century. 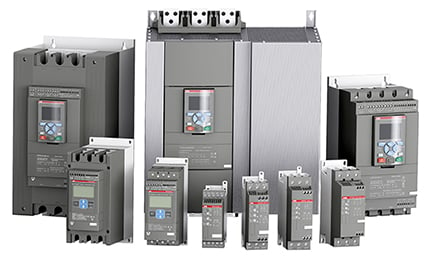 In a very short description, the main operating principle is that a pair of silicon-controlled rectifiers (SCRs) or similar TRIACS which can handle alternating voltages are placed in line with each of the motor phase supply lines. If the entire waveform is allowed to be sent, the motor will receive full voltage just as with a normal contactor.

These SCRs and TRIACs can be activated, or ‘fired’ at very specific times, usually determined by a microprocessor or simple digital control circuit. If the device is fired just as the voltage is at its peak, then only half of the total available energy is supplied to the motor. But even while reducing the energy supply, the full voltage is still applied.

In contrast, many methods such as reduced-voltage starting actually dissipate much of the energy through a resistor. This yields massive amounts of waste heat and reduces the torque output from the motor by lowering the voltage.

Soft starting means to begin with supplying a very small amount of energy just to get the motor turning slowly, but then rapidly ramp up the energy until the full running speed has been reached. Notice that during this time, the peak voltage of the waveform was never reduced, only the percent of the waveform supplied to the motor was reduced.

This operating principle shares some similarities to pulse-width modulation (PWM) in DC motor circuits, but a PWM cannot be used with AC since the voltage is not constant.

Although variable frequency drives (VFDs) are not soft starters by definition, they can produce the same effects. Usually, they are more expensive than a basic soft start controller, but sometimes the additional benefits are worth the cost. 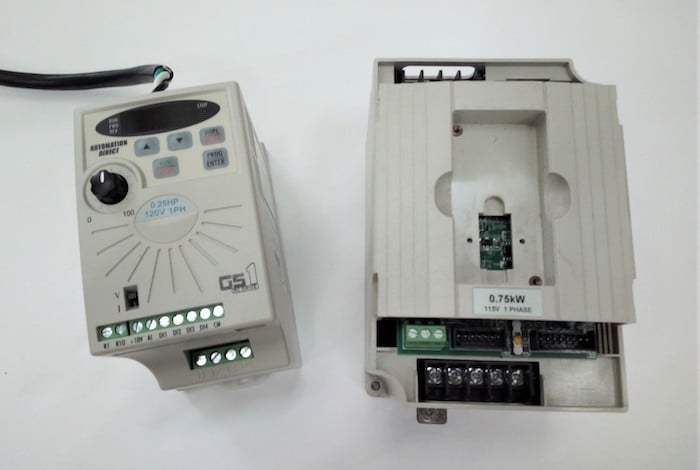 Figure 3. Two examples of VFDs which provide ramping, but are more advanced than a typical soft starting system.

They add the ability to be networked to a control system and to have dynamic control over changing ramp rates, alarms, system monitoring, data collection, and a wide range of other benefits.

These VFDs are worth mentioning as a very common (and extremely useful) modern alternative to soft starters.