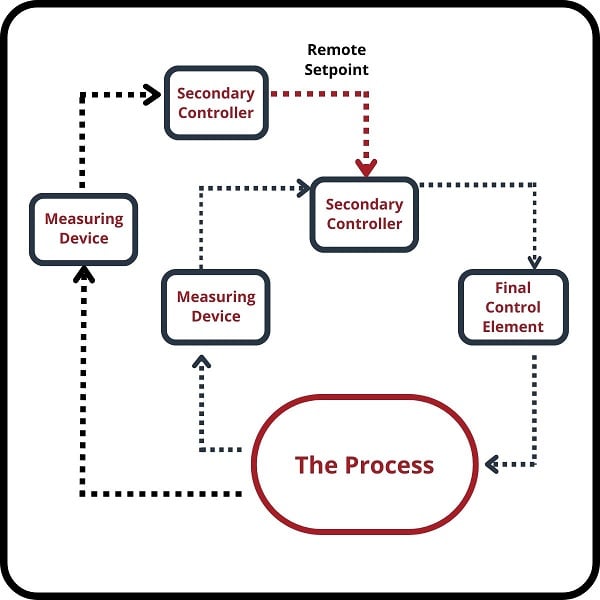 A simple control system drawn in block diagram form looks like this: 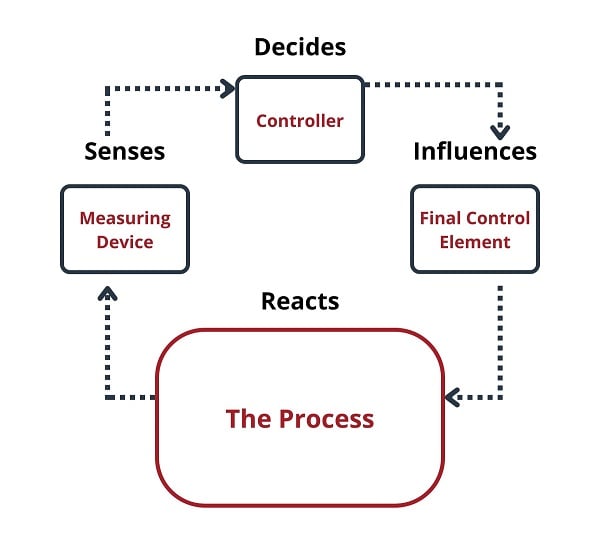 Information from the measuring device (sensor or transmitter) goes to the controller, then to the final control device (solenoid coil, motor drive, or control valve), influencing the process which is sensed again by the measuring device. The controller’s task is to inject the proper amount of negative feedback such that the process variable stabilizes over time. This flow of information is collectively referred to as a feedback control loop.

Thus, a cascade control system consists of two feedback control loops, one nested inside the other: 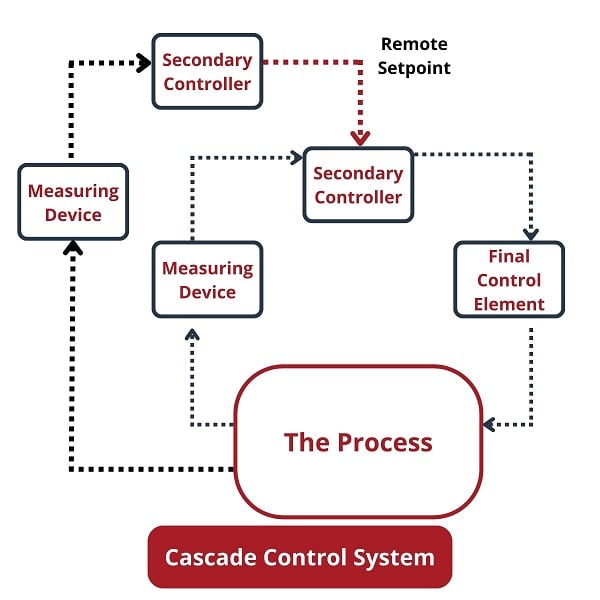 An analogy for understanding cascade control is that of delegation in a work environment. If a supervisor delegates some task to a subordinate, and that subordinate performs the task without further need of guidance or assistance from the supervisor, the supervisor’s job is made easier. The subordinate takes care of all the little details that would otherwise burden the supervisor if the supervisor had no one to delegate to.

An example of cascade control applied to a real industrial process is shown here, for a dryer system where heated air is used to evaporate water from a granular solid. The primary process variable is the outlet air exiting the dryer, which should be maintained at a high enough temperature to ensure water will not remain in the upper layers of the solid material. This outlet temperature is fairly slow to react, as the solid material mass creates a large lag time: 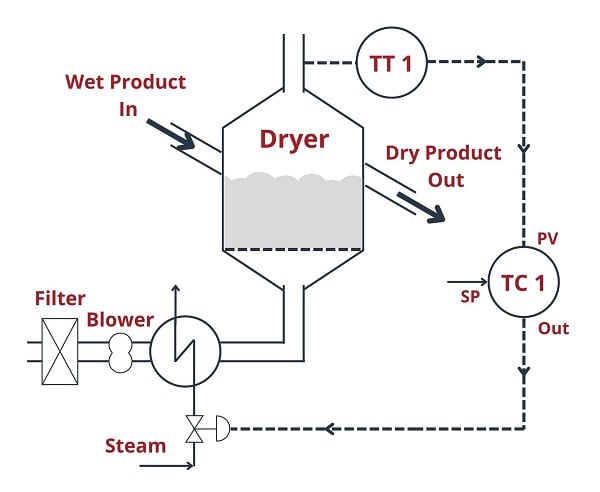 There are several parameters influencing the temperature of the outlet air other than the moisture content of the drying material. These include air flow, ambient air temperature, and variations in steam temperature. Each one of these variables is a load on the process variable we are trying to control (outlet air temperature). If any of these parameters were to suddenly change, the effect would be slow to register at the outlet temperature even though there would be an immediate impact at the bottom of the dryer where the heated air enters. Correspondingly, the control system would be too slow to correct for any of these changing loads.

We may better compensate for these loads by installing a second temperature transmitter at the inlet duct of the dryer, with its own controller to adjust steam flow at the command of the primary controller: 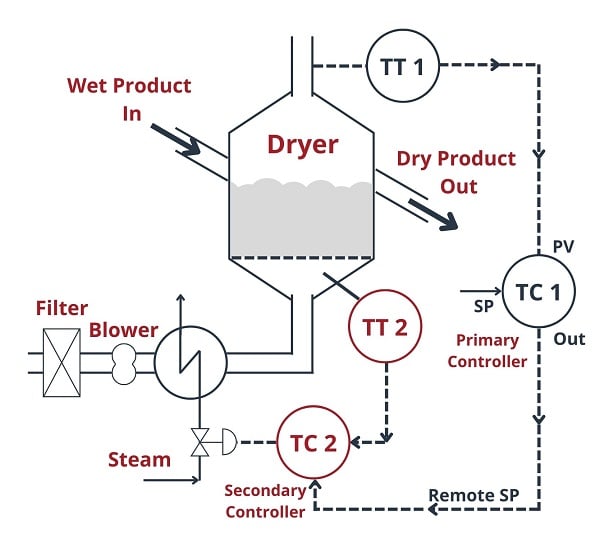 Now, if any of the loads related to incoming air flow or temperature vary, the secondary controller (TC-1b) will immediately sense the change in dryer inlet temperature and compensate by adjusting steam flow through the heat exchanger. Thus, the secondary, or “slave” control loop (1b) helps stabilize the primary, or “master” control loop (1a) by reacting to load changes long before any effect might manifest at the dryer outlet.

To re-emphasize an important point, one of the non-negotiable requirements for cascade control is that the secondary (slave) loop must be faster-responding than the primary (master) loop. Cascade control cannot function if this speed relationship is reversed. Temperature controller TC-1b is able to be secondary to controller TC-1a because the natural response time of the temperature at the dryer’s bottom is much shorter than at the dryer’s top with respect to any changes in steam valve position.

A common implementation of cascade control is where a flow controller receives a setpoint from some other process controller (pressure, temperature, level, analytical, etc.), fluid flow being one of the fastest-responding process types in existence. A feedwater control system for a steam boiler (shown here in pneumatic form) is a good example: 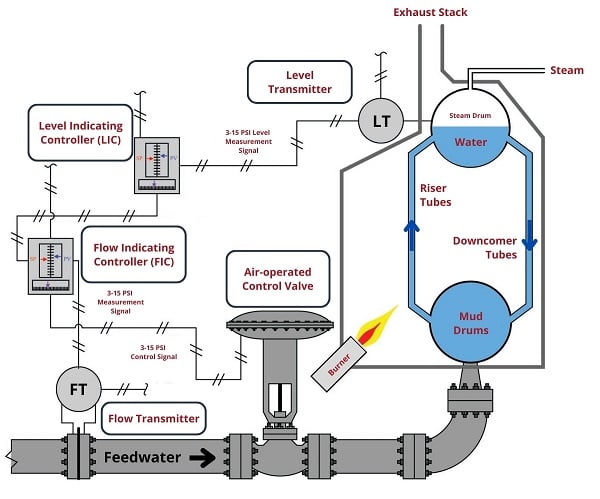 The “secondary” or “slave” flow controller works to maintain feedwater flow to the boiler at whatever flow rate is desired by the level controller. If feedwater pressure happens to increase or decrease, any resulting changes in flow will be quickly countered by the flow controller without the level controller having to react to a consequent upset in steam drum water level. Thus, cascade control works to guard against steam drum level instability resulting from changes in the feedwater flow caused by factors outside the boiler. As stated previously, the secondary (flow) controller effectively shields the primary (level) controller from loads in the feedwater supply system so that the primary controller doesn’t have to deal with those loads.

This level/flow cascade control system also embodies the principle of the secondary (slave) loop being faster-responding than the primary (master) loop. Water flow is an inherently fast process, the flow rate responding immediately to changes in valve position. By contrast, water level is a much slower-responding type of process. If you perform a “thought experiment” where the feedwater valve is suddenly opened fully, it is easy to see that the feedwater flow rate will immediately reach its full (100%) value while the steam drum’s water level will merely begin to rise, taking some time to reach its full (100%) value.

It is worth noting that the inclusion of a flow control secondary loop to this boiler water level control system also helps to overcome a potential problem of the control valve: nonlinear behavior. In the control valves chapter, we explore the phenomenon of installed valve characteristics (Chapter 30, Control Valve Characterization section), specifically noting how the change in pressure drop across a control valve influences its throttling behavior. The result of these pressure changes is a non-linearization of valve response, such that the valve tends to be more responsive near its closed position and less responsive near its open position. One of the benefits of cascaded flow control is that this problem becomes confined to the secondary (flow control) loop, and is effectively removed from the primary control loop. To phrase it simply, distorted valve response becomes “the flow controller’s problem” rather than something the level controller must manage. The result is a level control system with more predictable response.

A classic example of cascade control strategy is found in motion control applications, where an electric motor is used as the final control element to precisely position a piece of machinery. In this capacity, the motor is usually called a servo. Robotic systems make extensive use of servo motors and cascaded control loops to modulate power to those motors. The following illustration shows a triple-cascade control system for a motor-actuated elevator, precisely controlling the position of the elevator through cascaded velocity and motor current control: 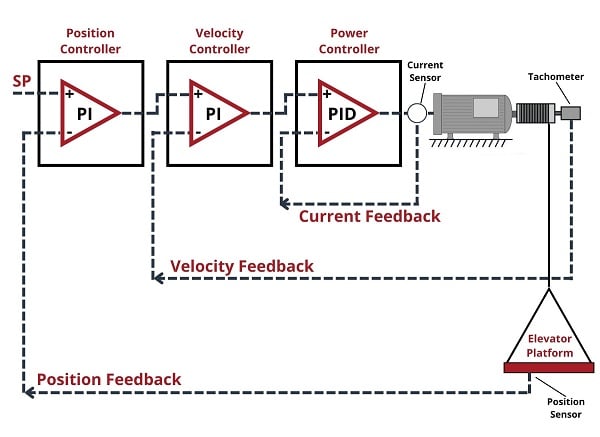 Hypothetically, the position of the elevator could be controlled with a single PID controller sensing platform position and directly sending power to the motor. However, much more precise control of the platform is achievable by sensing position, velocity, and motor current, controlling each one of those variables with its own loop. In motion control systems, each successive variable is the time-derivative of its precursor. Velocity, for instance, is the time-derivative of position (\(v = {dx \over dt}\)). Motor current, which is usually proportional to motor torque, which in turn is proportional to the angular acceleration (\(\alpha\)) of the winch and consequently the linear acceleration of the platform (\(a\)), is the time-derivative of velocity (\(a = {dv \over dt}\)). If it were not for cascading, a single PID controller would have to control position by manipulating the acceleration of the platform (i.e. motor current). This would make the process characteristic “runaway” in nature, as any fixed amount of current will cause the platform to accelerate.

Here with servomechanisms we see how cascading not only has the effect of “shielding” certain load variables from the master controller’s view, but it also simplifies the dynamic characteristics of the process from that same point of view. Instead of the position controller having to regulate an inherently “runaway” process, it now sees the process as having an “integrating” characteristic, since any constant output signal from the position controller results in the platform holding to a constant velocity (i.e. platform position will change at a constant rate over time, rather than at an accelerating rate).

Just like supervisory control systems where a process controller receives a “remote” setpoint signal from some other system, the secondary (‘slave’) controller in a cascade system typically has three different operating modes: