Supervisory control relies on a main CPU to provide setpoint values while one or more ‘regulatory’ controllers perform the continuous, real-time feedback and output loops to the final control elements.

The next step in complexity after simple automatic control is to automate the adjustment of the setpoint for a process controller. A common implementation of this concept is the automatic cycling of setpoint values according to a timed schedule. An example of this is a temperature controller for a heat-treatment furnace used to temper metal samples: 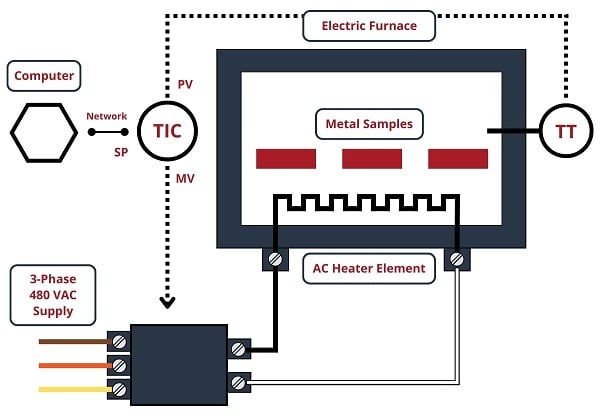 Since the heat-treatment of metals requires particular temperature ranges and rates of change over time, this control system relieves the human operator of having to manually adjust setpoint values again and again during heat-treatment cycles. Instead, the computer schedules different setpoint values at different times (even setpoint values that change steadily at a certain rate over a period of time) according to the needs of the particular metal type and treatment type. Such a control scheme is quite common for heat-treating processes, and it is referred to as ramp and soak.

Supervisory setpoint control is also used in the chemical processing industries to optimize production efficiencies by having a powerful computer provide setpoint adjustments to regulatory controls based on mathematical models of the process and optimization constraints. In simple terms, this means having a computer make setpoint adjustments to the normal PID loop controllers instead (or in addition to) human operators making setpoint changes. This forms a two-layer process control system: the “base” or “regulatory” layer of control (PID loop controllers) and the “high” or “supervisory” level of control (the powerful computer with the mathematical process models).

Such “optimizing” control systems are usually built over a digital network for reasons of convenience. A single network cable not only is able to communicate the frequent setpoint changes from the supervisory computer to the multitude of process loop controllers, but it may also carry process variable information from those controllers back to the supervisory computer so it has data for its optimization algorithms to operate on: 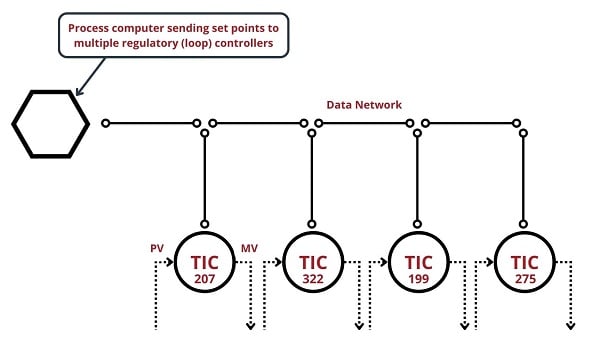 The complexity of these optimization algorithms is limited only by the computational power of the supervisory computer and the creativity of the programmers and engineers who implement it. A modern trend in process optimization for industries able to produce varying proportions of different products from the same raw material feed is to have computer algorithms select and optimize production not only for maximum cost efficiency, but also for maximum market sales and minimum storage of volatile product.