Filled-bulb systems exploit the principle of fluid expansion to measure temperature. If a fluid is enclosed in a sealed system and then heated, the molecules in that fluid will exert a greater pressure on the walls of the enclosing vessel. By measuring this pressure, and/or by allowing the fluid to expand under constant pressure, we may infer the temperature of the fluid.

Class I and Class V systems use a liquid fill fluid (class V is mercury). Here, the volumetric expansion of the liquid drives an indicating mechanism to show temperature: 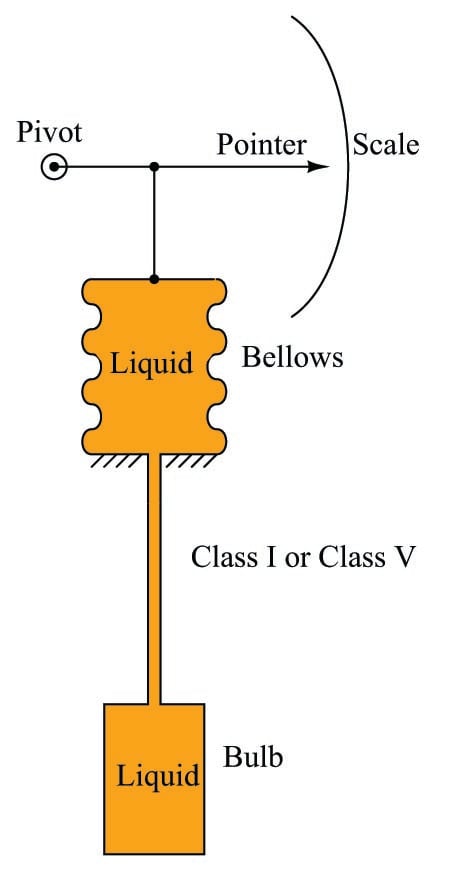 Class III systems use a gas fill fluid instead of liquid. Here, the change in pressure with temperature (as described by the Ideal Gas Law) allows us to sense the bulb’s temperature: 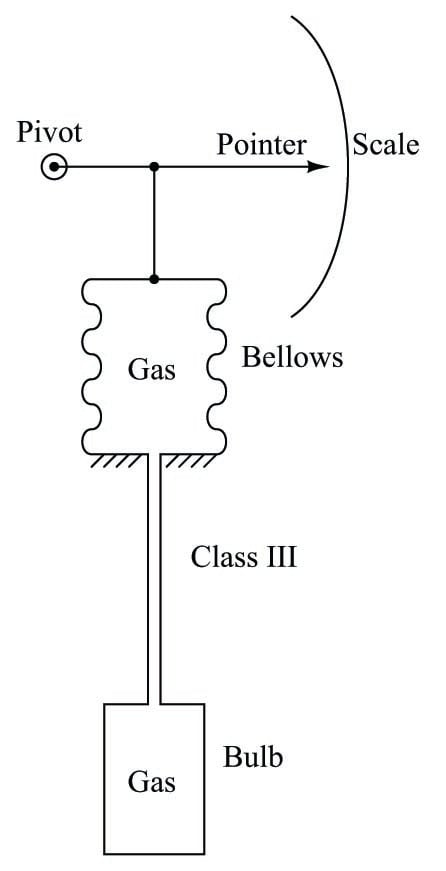 A fundamentally different class of filled-bulb system is the Class II, which uses a volatile liquid/vapor combination to generate a temperature-dependent fluid expansion: 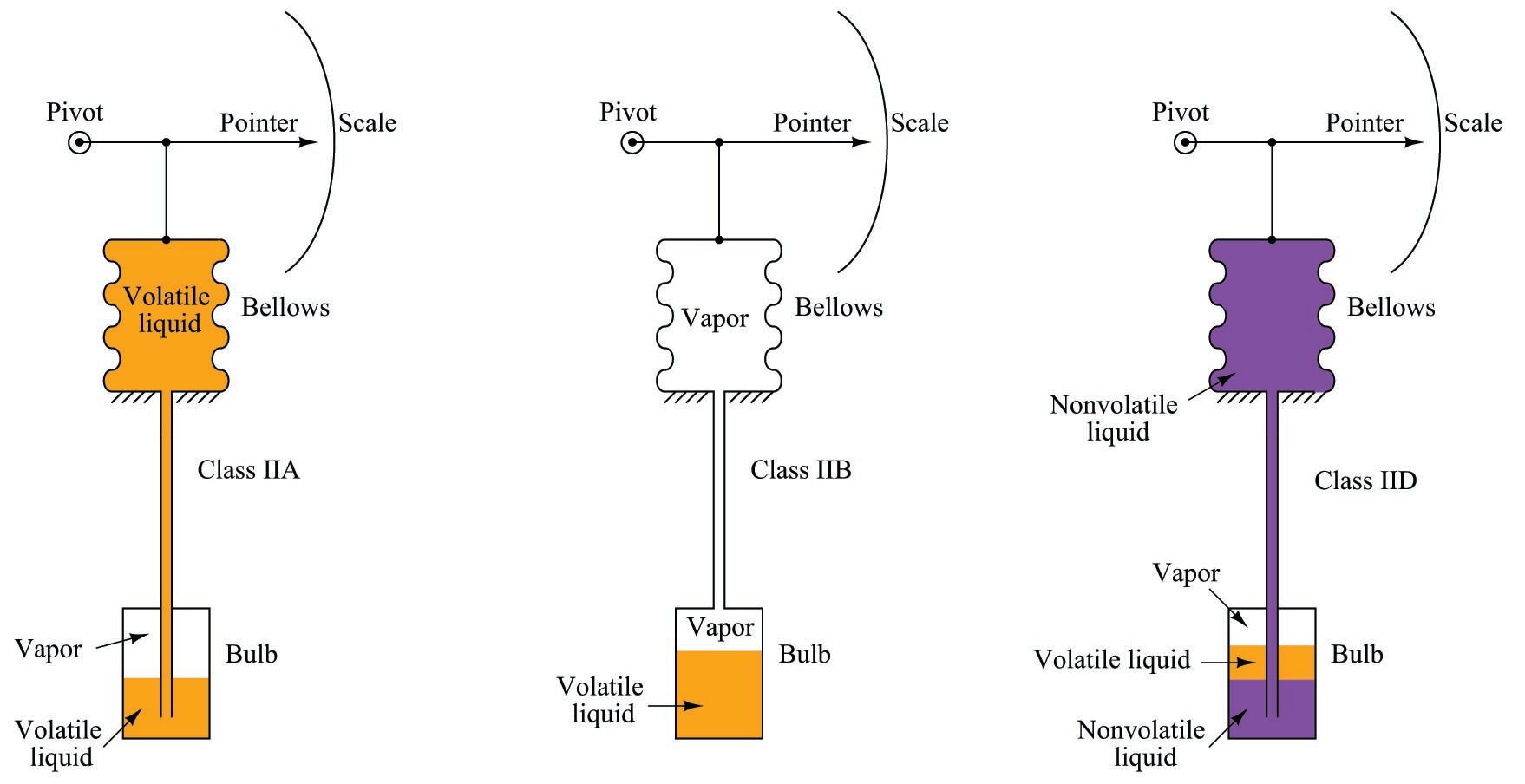 Given that the liquid and vapor are in direct contact with each other, the pressure in the system will be precisely equal to the saturated vapor pressure at the vapor/liquid interface. This makes the Class II system sensitive to temperature only at the bulb and nowhere else along the system’s volume. Because of this phenomenon, a Class II filled-bulb system requires no compensation for temperature changes at the indicator.

Class II systems do have one notable idiosyncrasy, though: they have a tendency to switch from Class IIA to Class IIB when the temperature of the sensing bulb crosses the ambient temperature at the indicator. Simply put, the liquid tends to seek the colder portion of a Class II system while the vapor tends to seek the warmer portion. This causes problems when the indicator and sensing bulb exchange identities as warmer/colder. The rush of liquid up (or down) the capillary tubing as the system tries to reach a new equilibrium causes intermittent measurement errors. Class II filled-bulb systems designed to operate in either IIA or IIB mode are classified as IIC.

One calibration problem common to all systems with liquid-filled capillary tubes is an offset in temperature measurement due to hydrostatic pressure (or suction) resulting from a different in height between the measurement bulb and the indicator. This represents a “zero” shift in calibration, which may be permanently offset by a “zero” adjustment at the time of installation. Class III (gas-filled) and Class IIB (vapor-filled) systems, of course, suffer no such problem because there is no liquid in the capillary tube to generate a pressure due to height.

A photograph of a pneumatic temperature transmitter using a filled-bulb as the sensing element appears here:

This transmitter happens to be a Moore Products “Nullmatic” model. The capillary tube connecting the fluid-filled bulb to the transmitter mechanism is protected by a spiral-metal jacket. The bulb itself is located at the very end of the stainless steel “wand” which inserts into the process fluid to be measured: 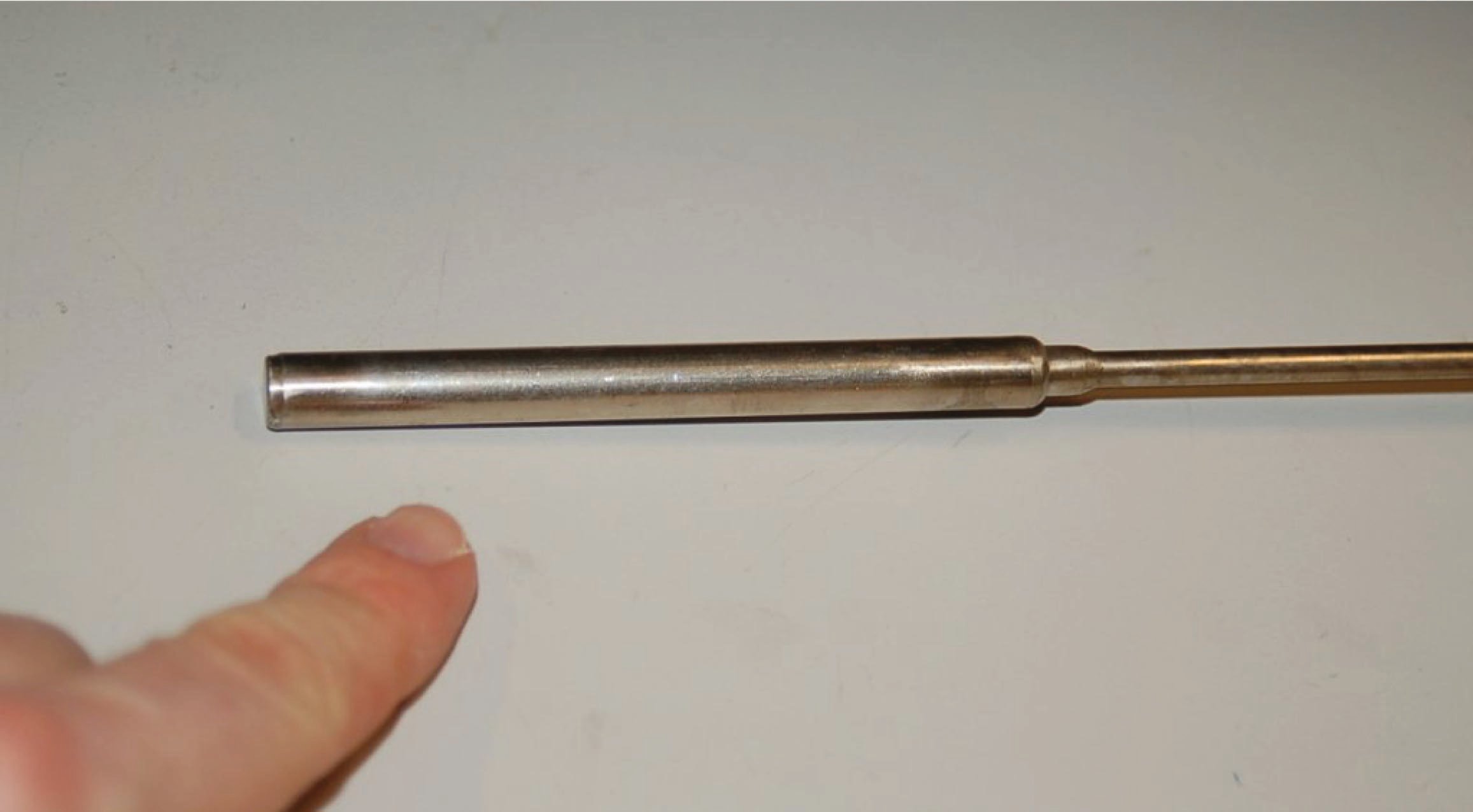 Instead of directly actuating a pointer mechanism, the fluid pressure in this instrument actuates a self-balancing pneumatic mechanism to produce a 3 to 15 PSI air pressure signal representing process temperature.

Filled-bulb temperature sensors are seldom used in industrial applications anymore, chiefly due to the superiority of electrical sensors. The only significant advantage filled-bulb sensors hold over electrical sensors is not needing electricity to function, but this is usually not a serious consideration within a modern industrial facility.