One of the simplest classes of temperature sensor is one where temperature effects a change in electrical resistance. With this type of primary sensing element, a simple ohmmeter is able to function as a thermometer, interpreting the resistance as a temperature measurement:

A Resistive Temperature Detector (RTD) is a special temperature-sensing element made of fine metal wire, the electrical resistance of which changes with temperature as approximated by the following formula:

The following example shows how to use this formula to calculate the resistance of a “100 ohm” platinum RTD with a temperature coefficient value of 0.00392 at a temperature of 35 degrees Celsius:

Water’s melting/freezing point is the standard reference temperature for most RTDs. Here are some typical values of \(\alpha\) for common metals:

As mentioned previously, platinum is a common wire material for industrial RTD construction. The alpha (\(\alpha\)) value for platinum varies according to the alloying of the metal. For “reference grade” platinum wire, the most common alpha value is 0.003902. Industrial-grade platinum alloy RTD wire is commonly available in two different coefficient values: 0.00385 (the “European” alpha value) and 0.00392 (the “American” alpha value), of which the “European” value of 0.00385 is most commonly used (even in the United States!).

An alternative to mathematically predicting the resistance of an RTD is to simply look up its predicted resistance versus temperature in a table of values published for that RTD type. Tables capture the nuances of an RTD’s non-linearity without adding any mathematical complexity: simply look up the resistance corresponding to a given temperature, or vice-versa. If a value falls between two nearest entries in the table, you may interpolate the find the desired value, regarding the two nearest table entries as end-points defining a line segment, calculating the point you desire along that line.

The following schematic diagrams show the relative effects of 2 ohms total wire resistance on a thermistor circuit and on an RTD circuit: 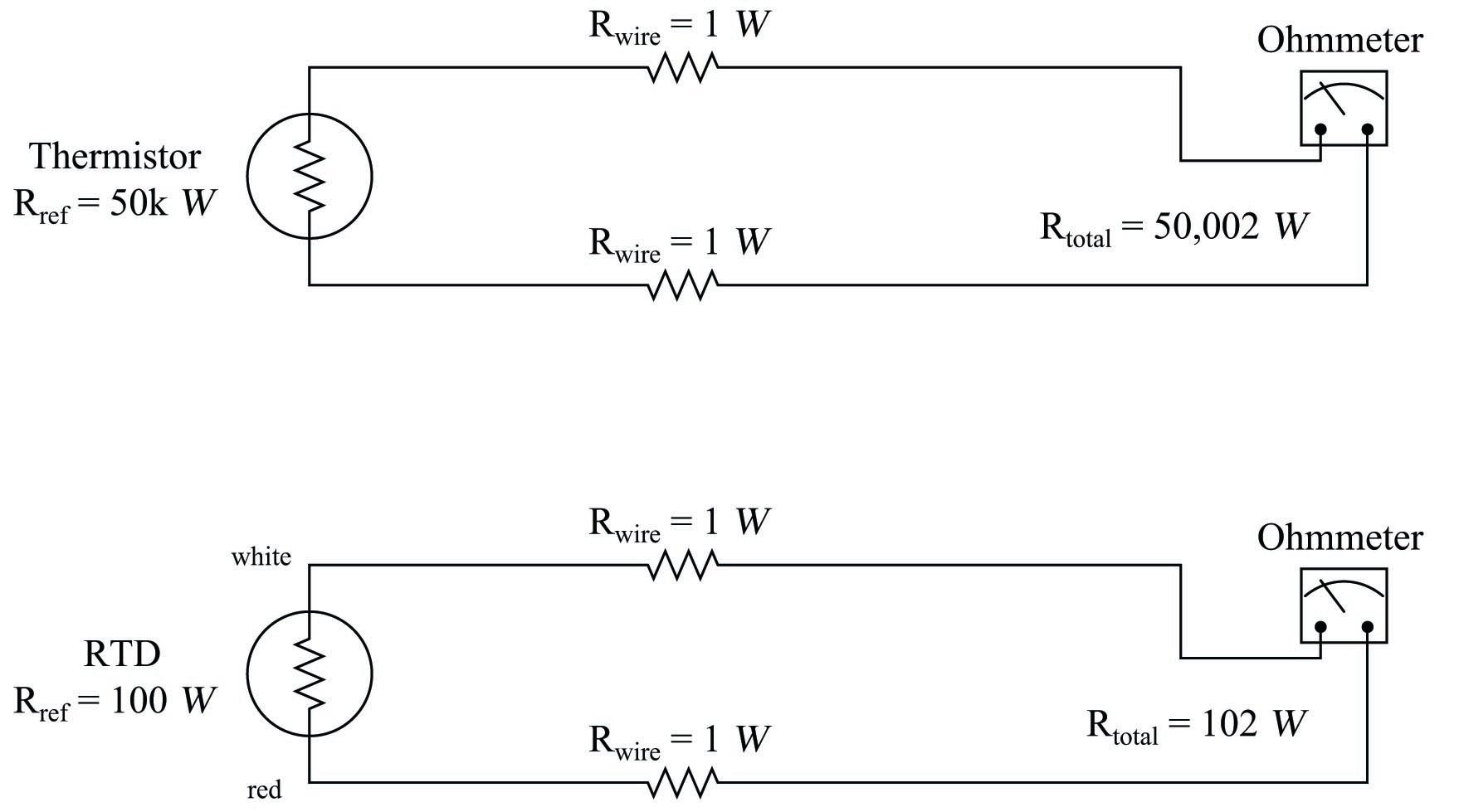 In HVAC (Heating, Ventilation, and Air Conditioning) systems, where the temperature measurement range is relatively narrow, the nonlinearity of thermistors is not a serious concern and their relative immunity to wire resistance error is a definite advantage over RTDs. In industrial temperature measurement applications where the temperature ranges are usually much wider, the nonlinearity of thermistors becomes a significant problem, so we must find a way to use low-resistance RTDs and deal with the (lesser) problem of wire resistance.

A very old electrical measurement technique known as the Kelvin or four-wire method is a practical solution to the problem of wire resistance. Commonly employed to make precise resistance measurements for scientific experiments in laboratory conditions, the four-wire technique uses four wires to connect the resistance under test (in this case, the RTD) to the measuring instrument, which consists of a voltmeter and a precision current source. Two wires carry “excitation” current to the RTD from the current source while the other two wires merely “sense” voltage drop across the RTD resistor element and carry that voltage signal to the voltmeter. RTD resistance is calculated using Ohm’s Law: taking the measured voltage displayed by the voltmeter and dividing that figure by the regulated current value of the current source. A simple 4-wire RTD circuit is shown here for illustration:

Note how wire colors (white and red) indicate which wires are common pairs at the RTD. The RTD is polarity-insensitive because it is nothing more than a resistor, which is why it doesn’t matter which color is positive and which color is negative.

The only disadvantage of the four-wire method is the sheer number of wires necessary. Four wires per RTD can add up to a sizeable wire count when many different RTDs are installed in a process area.

A compromise between two-wire and four-wire RTD connections is the three-wire connection, which looks like this:

Once again, RTD resistance is calculated from the RTD voltage and the known current source value using Ohm’s Law, just as it is in a 4-wire circuit.

Thus, we see that the three-wire RTD circuit saves us wire cost over a four-wire circuit, but at the “expense” of a potential measurement error. The beauty of the four-wire design was that wire resistances were completely irrelevant: a true determination of RTD voltage (and therefore RTD resistance) could be made regardless of how much resistance each wire had, or even if the wire resistances were different from each other. The error-canceling property of the three-wire circuit, by contrast, hinges on the assumption that the two current-carrying wires have exactly the same resistance, which may or may not actually be true.

It should be understood that real three-wire RTD instruments do not employ direct-indicating voltmeters as shown in these simplified examples. Actual RTD instruments use either analog or digital “conditioning” circuits to measure the voltage drops and perform the necessary calculations to compensate for wire resistance. The voltmeters shown in the four-wire and three-wire diagrams serve only to illustrate the basic concepts, not to showcase practical instrument designs.

Note that the voltage appearing at point B with reference to ground is the RTD’s voltage plus the voltage dropped by the lower current-carrying wire: \(V_{RTD} + V_{error}\). It is this “error” voltage we must eliminate in order to achieve an accurate measurement of RTD voltage drop, essential for accurately inferring RTD temperature. The voltage appearing at point A is greater by the upper wire’s voltage drop (\(V_{error} + V_{RTD} + V_{error}\)) because that point spans one more wire resistance in the circuit than point B.

Like all negative-feedback operational amplifier circuits, the amplifier does its best to maintain the two input terminals at (nearly) the same voltage. Thus, the voltage at point B is duplicated at the inverting input terminal by the amplifier’s feedback action. From this we may see that the voltage drop across the left-hand 100 k\(\Omega\) resistor is simply \(V_{error}\): the potential difference between point A and point B. The feedback current driving through this resistor goes through the other 100 k\(\Omega\) feedback resistor equally, causing the same voltage drop to appear there (\(V_{error}\)). We may see that the polarity of this second resistor’s voltage drop ends up subtracting that quantity from the voltage appearing at the inverting input terminal. The inverting terminal voltage (\(V_{RTD} + V_{error}\)) minus the right-hand 100 k\(\Omega\) resistor’s voltage drop (\(V_{error}\)) is simply \(V_{RTD}\), and so the voltmeter registers the true RTD voltage drop without any wire resistance error.

Like the dual-voltmeter circuit shown previously, this amplified 3-wire RTD sensing circuit “assumes” the two current-carrying wires will have the exact same resistance and therefore drop the same amount of voltage. If this is not the case, and one of these wires drops more voltage than the other, the circuit will fail to yield the exact RTD voltage (\(V_{RTD}\)) at the amplifier output. This is the fundamental limitation of any 3-wire RTD circuit: the cancellation of wire resistance is only as good as the wires’ resistances are precisely equal to each other.

A photograph of a modern temperature transmitter capable of receiving input from 2-wire, 3-wire, or 4-wire RTDs (as well as thermocouples, another type of temperature sensor entirely) shows the connection points and the labeling describing how the sensor is to be connected to the appropriate terminals: 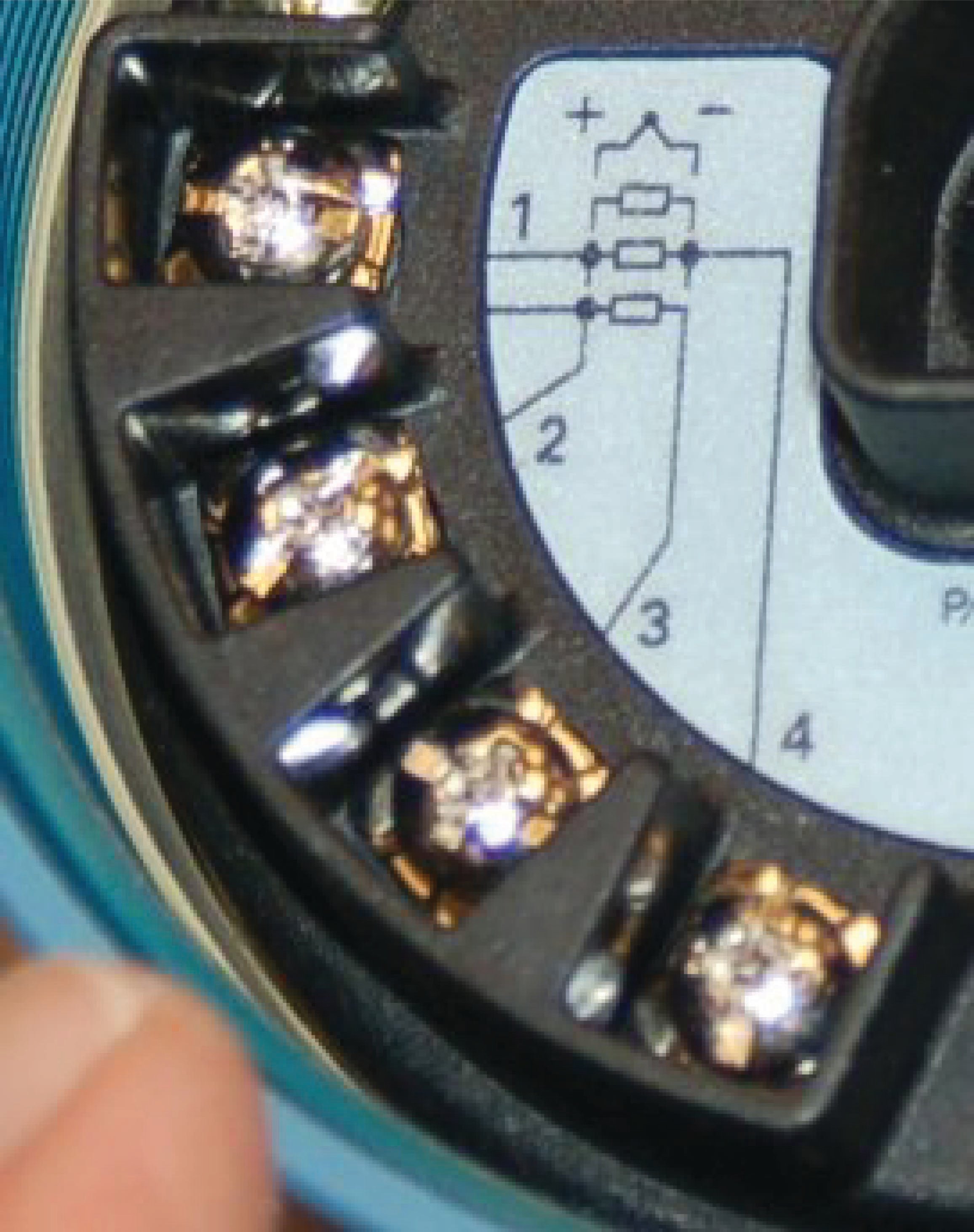 Proper connections for all three types of RTD sensor (2-wire, 3-wire, and 4-wire) to a user-configurable transmitter are shown in the following illustrations:

It is critically important to note that the common connections shown by the symbols for 3- and 4-wire RTD sensors represent junction points at the sensor; not terminals jumpered by the technician at the time of installation, and not internal jumpers inside the transmitter. The whole purpose of having 3-wire and 4-wire RTD circuits is to eliminate errors due to voltage drop along the current-carrying wires, and this can only be realized if the “sensing” wire(s) extend out to the RTD itself and connect there. If the transmitter’s sensing terminal(s) are only jumpered to a current-carrying terminal, the transmitter will sense voltage dropped by the RTD plus voltage dropped by the current-carrying wire(s), leading to falsely high temperature indications.

Misconceptions surrounding proper RTD connections unfortunately abound both in students and in working industry professionals. With any luck, the following presentation will help you avoid such mistakes, and more importantly help you understand why the correct connections are best.

The following illustrations show both correct and incorrect ways to connect a 2-wire RTD to a 3- or 4-wire transmitter: 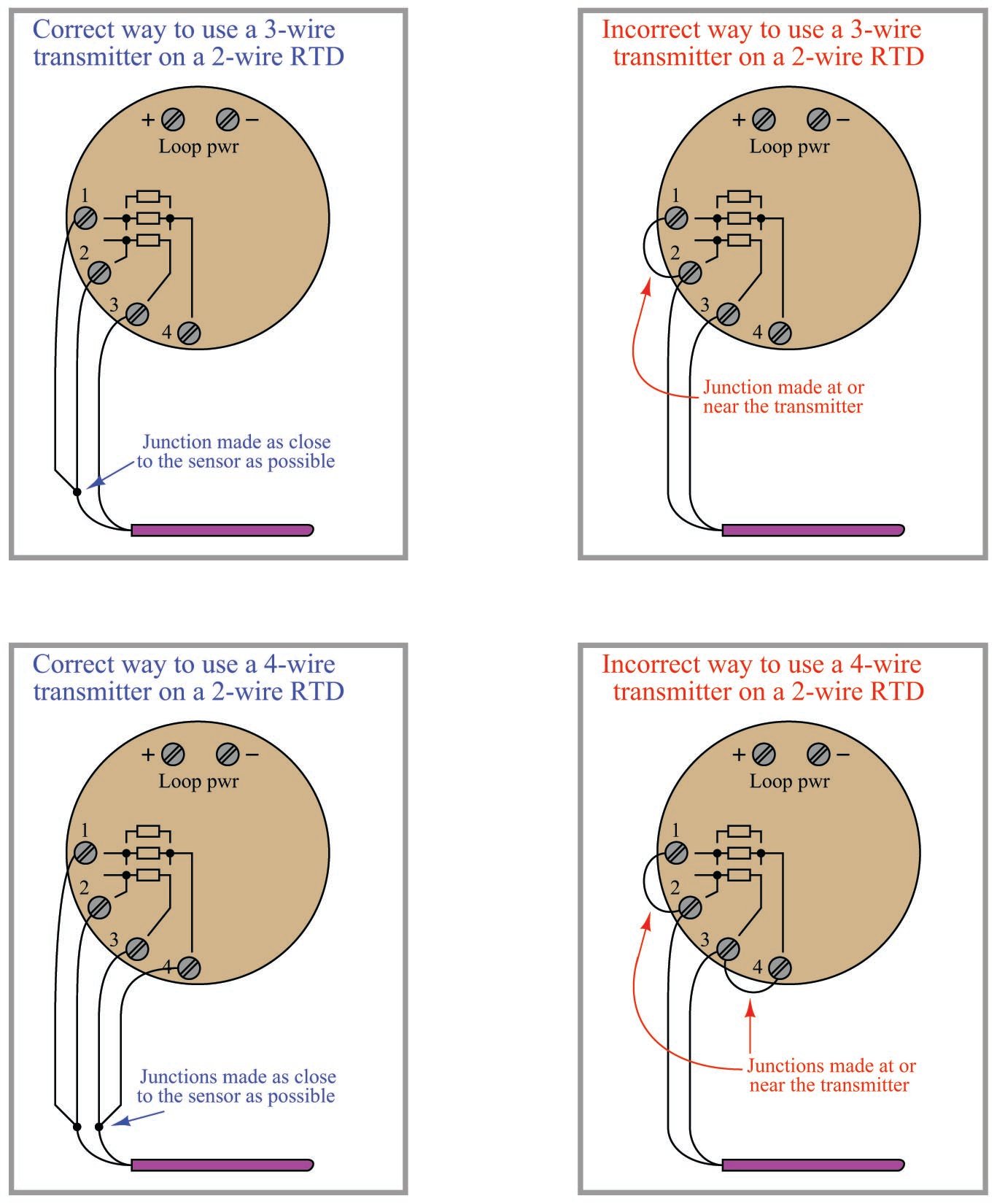 Jumpers placed at the transmitter terminals defeat the purpose of the transmitter’s 3-wire or 4-wire capabilities, downgrading its performance to that of a 2-wire system.

A similar problem occurs when someone tries to connect a 3-wire RTD to a 3-wire transmitter using a conveniently available 4-wire cable: 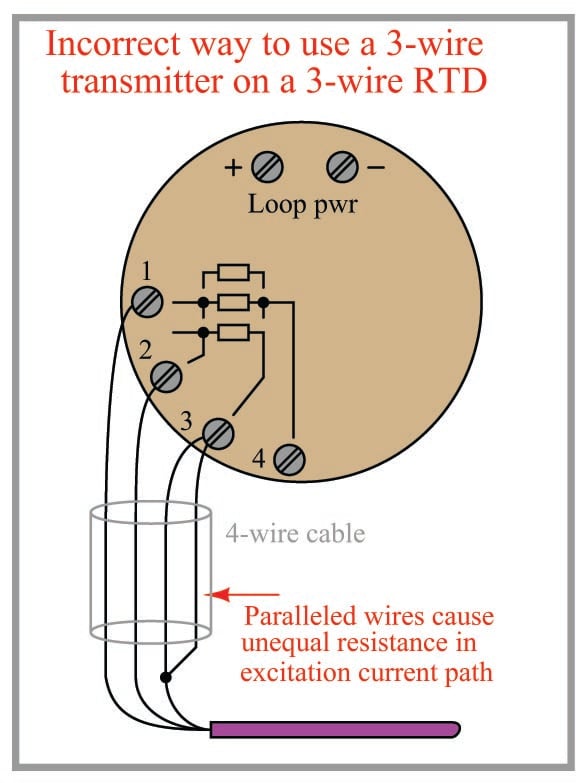 3-wire RTD measurement is based on the assumption that both current-carrying wires have exactly the same electrical resistance. By paralleling two of the four wires in the 4-wire cable, you will create unequal resistances in the current path, thus leading to measurement errors at the transmitter. 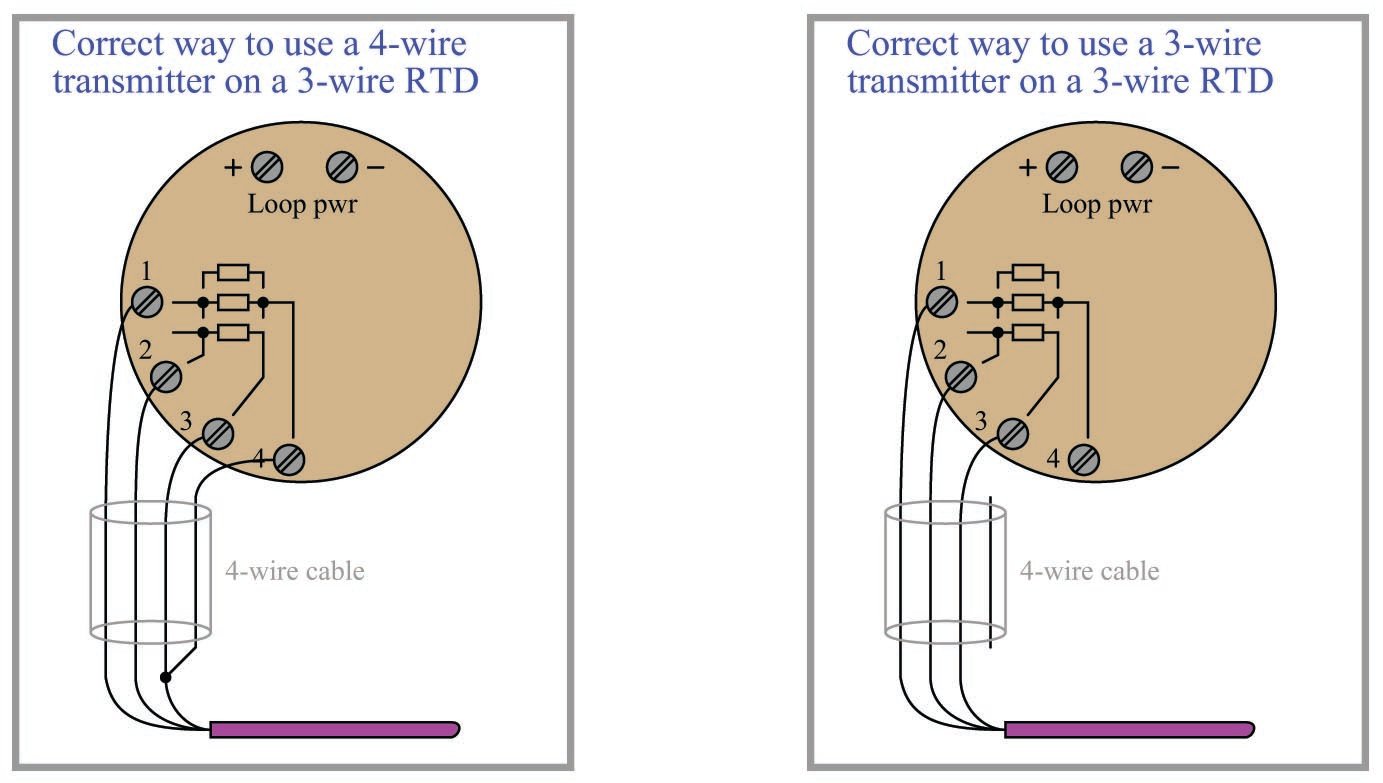 One problem inherent to both thermistors and RTDs is self-heating. In order to measure the resistance of either device, we must pass an electric current through it. Unfortunately, this results in the generation of heat at the resistance according to Joule’s Law:

This dissipated power causes the thermistor or RTD to increase in temperature beyond its surrounding environment, introducing a positive measurement error. The effect may be minimized by limiting excitation current to a bare minimum, but this results in less voltage dropped across the device. The smaller the developed voltage, the more sensitive the voltage-measuring instrument must be to accurately sense the condition of the resistive element. Furthermore, a decreased signal voltage means we will have a decreased signal-to-noise ratio, for any given amount of noise induced in the circuit from external sources.

One clever way to circumvent the self-heating problem without diminishing excitation current to the point of uselessness is to pulse current through the resistive sensor and digitally sample the voltage only during those brief time periods while the thermistor or RTD is powered. This technique works well when we are able to tolerate slow sample rates from our temperature instrument, which is often the case because most temperature measurement applications are slow-changing by nature. The pulsed-current technique enjoys the further advantage of reducing power consumption for the instrument, an important factor in battery-powered temperature measurement applications.