ABB launched the first truly collaborative robot or cobot in 2015, in the form of the YuMi. YuMi is made out of lightweight material and covered in foam to keep workers safe in a collision with the cobot.

Yumi is capable of functioning next to workers without the need for safety fences or safety stops. In 2017, two years after the dual-armed YuMi, ABB launched the single-armed YuMi to work in more confined spaces.

ABB recently added on to the YuMi family with the addition of their GoFa and SWIFTY robots. These robots intend to help by fitting into the growing healthcare, electronics, food and beverage, and other industries.

The original YuMi design is limited to a 500g payload, making it challenging to integrate into jobs requiring a larger payload. ABB’s solution was to introduce the new GoFa cobot with an increased payload. 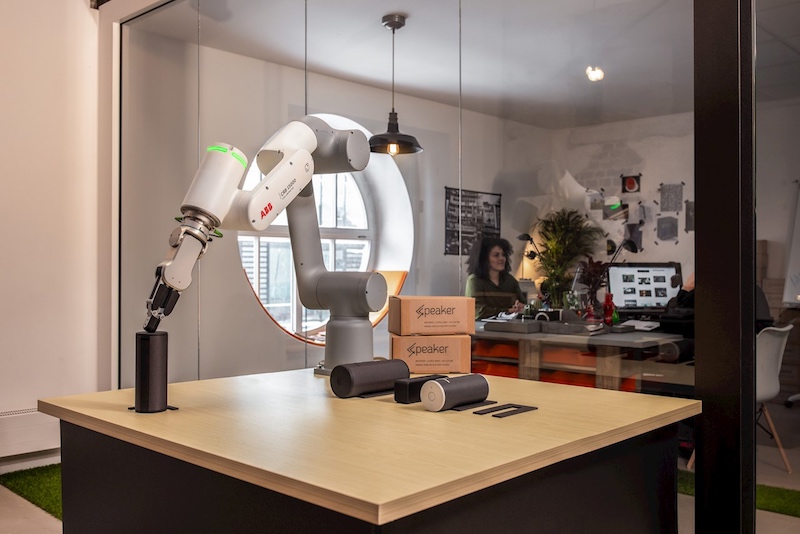 The GoFa Cobot is capable of managing a payload of 5kg. The increase in the payload is ten times larger than the original YuMi.

ABB also took into account the limited range of the YuMi and made the new GoFa with a reach of 950mm. The extensive reach of the GoFa makes it more beneficial to a broader range of manufacturers. The speed rating of GoFa is 2.2 meters per second, much faster than previous models.

GoFa is a capable robot in a cobot form, allowing for a more realistic approach to collaborative robotics integration into manufacturing.

The newly released ABB SWIFTY industrial cobot is the link between traditional robotics and cobot technology. With a payload of 4kg, it has less payload than the GoFa cobot but is capable of much higher speeds.

The SWIFTY is capable of reaching speeds up to 5 meters per second. This high-speed rating allows for the SWIFTY cobot to be used in applications needing higher speeds than other cobots can offer. 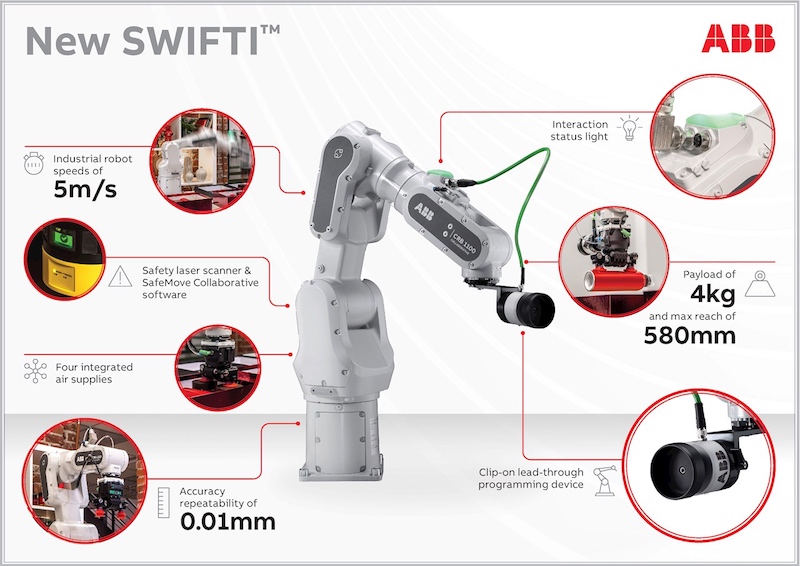 An infographic of the SWIFTI robot from ABB. Image used courtesy of ABB

SWIFTY can reach speeds similar to hard industrial robotics by using intermittent collaboration between worker and robot. The robot is only capable of such high speeds when a worker is not present and slows down to safe speed when a worker is within the cobots work area.

ABB is looking to expand the reach of robotics beyond traditional robotic industries. With the expansion of their cobot line, ABB intends to bring robotics to manufacturers and customers who have yet to automate many current processes. Customers can unbox their new collaborative robots and start running them within a few hours of unboxing.

Robotics is a continuously growing industry that is constantly evolving to meet the needs of its customers. Industries across the board have stated that they will be looking to expand their current robotic lines or start introducing robots into their current processes.

ABB is hoping to make the introduction for new consumers into robotics easier with cobots. The expansion of the YuMi line of cobots should make them much more versatile for integration into different industries.

The YuMi provides a single or dual-arm fully collaborative robot. The GoFa expands on the Yumi’s range and payload capabilities while remaining 100% collaborative.

The SWIFTY makes for a blend of industrial and collaborative robotics by increasing speeds when workers are not present.