The ctrlX SAFETY platform is available in a compact form factor, can react in as little as five milliseconds (5 ms), and can be programmed using a graphical programming language.

As part of the ctrlX WORKS series, integrates with other ctrlX hardware, software, and apps, including some made by 3rd parties. The system is fully scalable, meaning it can expand as the plant’s needs expand, with minimal reconfiguration.

The SafeMotion and SafeLogic

The ctrlX SAFETY system consists of two sets of modules, the SafeMotion and SafeLogic. 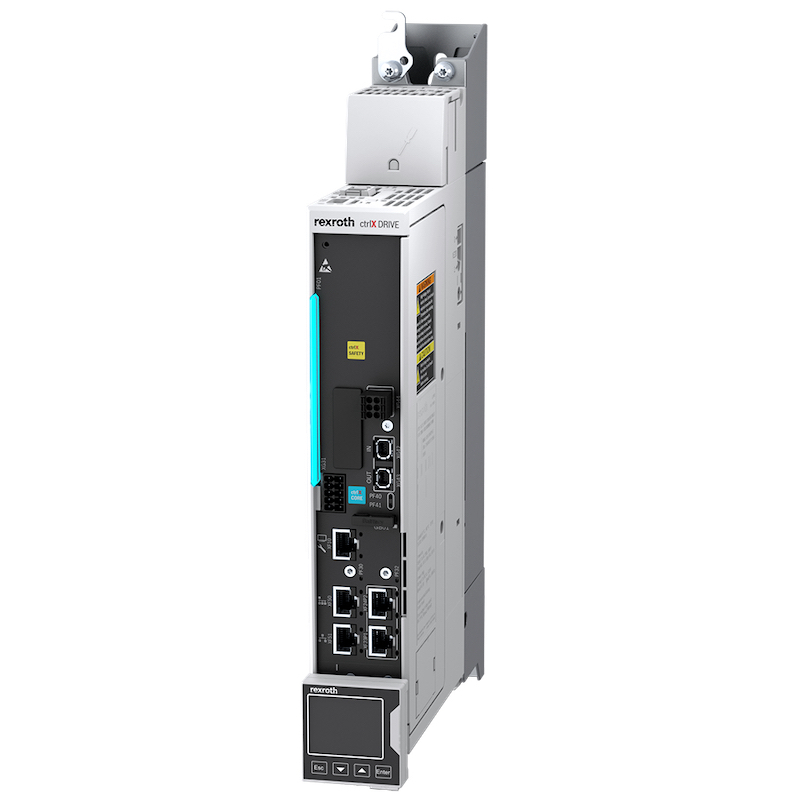 The SafeMotion ‘s’ is based on this modular drive system ctrlX DRIVE. Image courtesy of Bosch Rexroth.

SafeMotion is used to allow or stop robotic motion, as it monitors up to 16 parameters concerning motion, such as rotational direction, safe operating speeds, and position.

It has several shutdown options for various fault modes, such as shutting down, reducing the rotational speed, or controlled deceleration.

SafeLogic can receive data from as many as 96 sensors, meaning safety control decisions are done automatically, with recent data. SafeLogic can be linked to common safety peripherals, and because it uses common safe Fieldbus communication protocols, it will integrate with most automation systems.

The response times from the ctrlX SAFETY allow for more possibilities in machinery arrangement and clearances. When designing safety systems, the response time of the system must be considered when placing light curtains and interlocks. 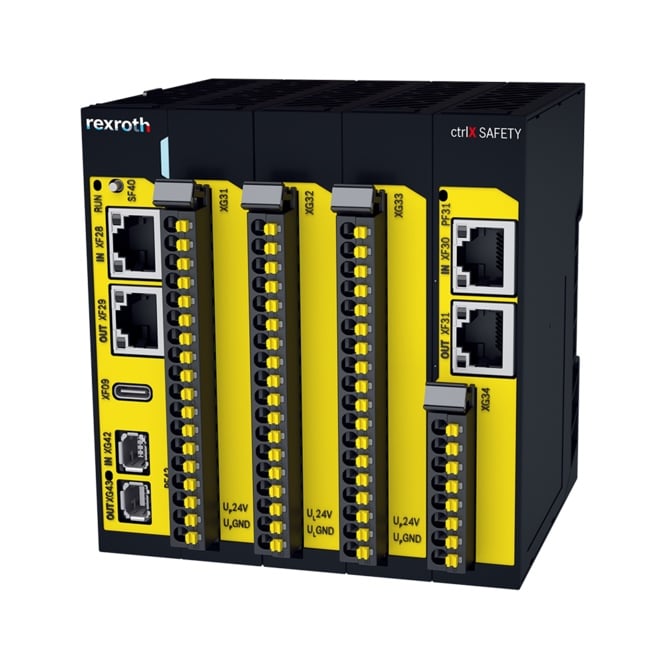 The average response time for many systems is on the order of 10s to 100s of milliseconds, so people must stay farther away from these systems to ensure that they have adequate time to stop in an emergency.

As robotic drive motors have increased in speed, the solution has been to move the barrier system farther away, keeping people farther from the system.

Instead, the ctrlX SAFETY system responds on the order of 5 ms, or about ten times faster than an automotive airbag, meaning high-speed robotic drives can be stopped quickly.

This allows technicians to work closer to these machines while having the ability to manually or automatically stop equipment in an emergency.

The graphical PLC programming language is another notable feature. Rather than sorting out lines of text, one can look at an intuitive picture of the system to determine how it works.

This can be a significant advantage for engineers a few years down the road who “inherit” this system, as it will take less time and effort to understand the purpose and the features of the existing code. They can see it as a picture, versus hunting for semicolons and decoding undocumented variable names, as often happens with legacy code.

Graphical configuration: Three drives, connected by EtherCAT, manage three separate motors, two of which are the same size, and the third of which is smaller. This is easier to understand than managing lines of text-based code. Image courtesy of Bosch Rexroth.

Overall, the ctrlX SAFETY platform aims to be customizable and scalable for many manufacturing environments.

With prompt response times, graphical programming language, existing code libraries, and third-party modules, the crtlX SAFETY platform hopes to remain as a standard for automation safety for the future.