ABB looks to bridge the gap between industrial and collaborative robotics, resulting in the new SWIFTI CRB 1300 'industrial cobot,' capable of higher speeds and payloads than traditional cobots in its class.

ABB has released what they claim to be the first industrial cobot. But what is an industrial cobot, and why should manufacturers and integrators make the switch to this new type of robot? 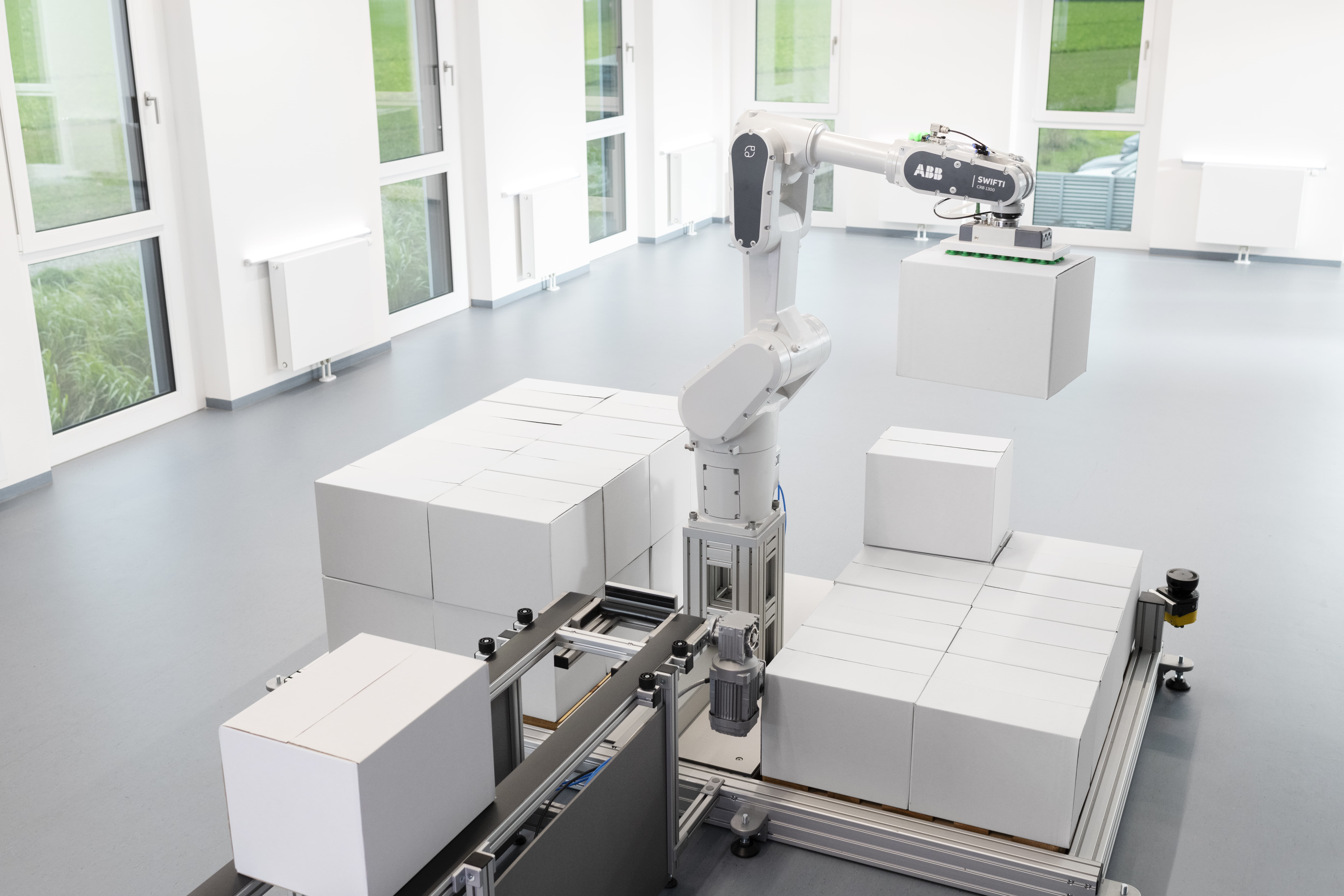 ABB has created the SWIFTI CRB 1300 in order to address a common problem with traditional collaborative robots—their slow speed. ABB has designed the industrial cobot to be faster than other comparable cobots on the market, without a sacrifice in safety.

ABB has worked to create a high quality design that can handle a number of different applications commonly out of reach for robots that are solely industrial robots or entirely collaborative robots. The unique combination of both worlds can optimize efficiency, with a theoretical threshold of 44% increase in efficiency with the specific guidance of ABB’s expert support system. When the industrial cobot was compared in a speed test against other cobots on the market, the SWIFTI was able to move thirteen boxes per minute, whereas traditional cobots were only capable of moving nine boxes in the same timeframe.

SWIFTI combines the efficiency of an industrial robot with the safety of a collaborative robot. Video used courtesy of ABB

So how is the SWIFTI CRB 1300 capable of such an increase in speed without a reduction in worker and plant safety? ABB has added specific sensors and safety protocols to the SWIFTI that enable it to work much faster than other cobots by optimizing speed during times that worker robot collision is unlikely. The sensor involves a safety laser scanner integrated with ABB’s SafeMove collaborative safety software that enables worker safety without the need for expensive safety fencing.

Safety fencing is often an expensive piece of any manufacturing automated cell in both terms of monetary value and the limited real estate on the manufacturing floor itself. The system works by using a laser scanner to relay information on the presence of workers or any foreign object within the limits of the laser scanners designated scanning area. The information provided by the scanner is then processed by ABB’s SafeMove software where a decision is made to either slow the robot down or stop it completely based on the nature of the intrusion. 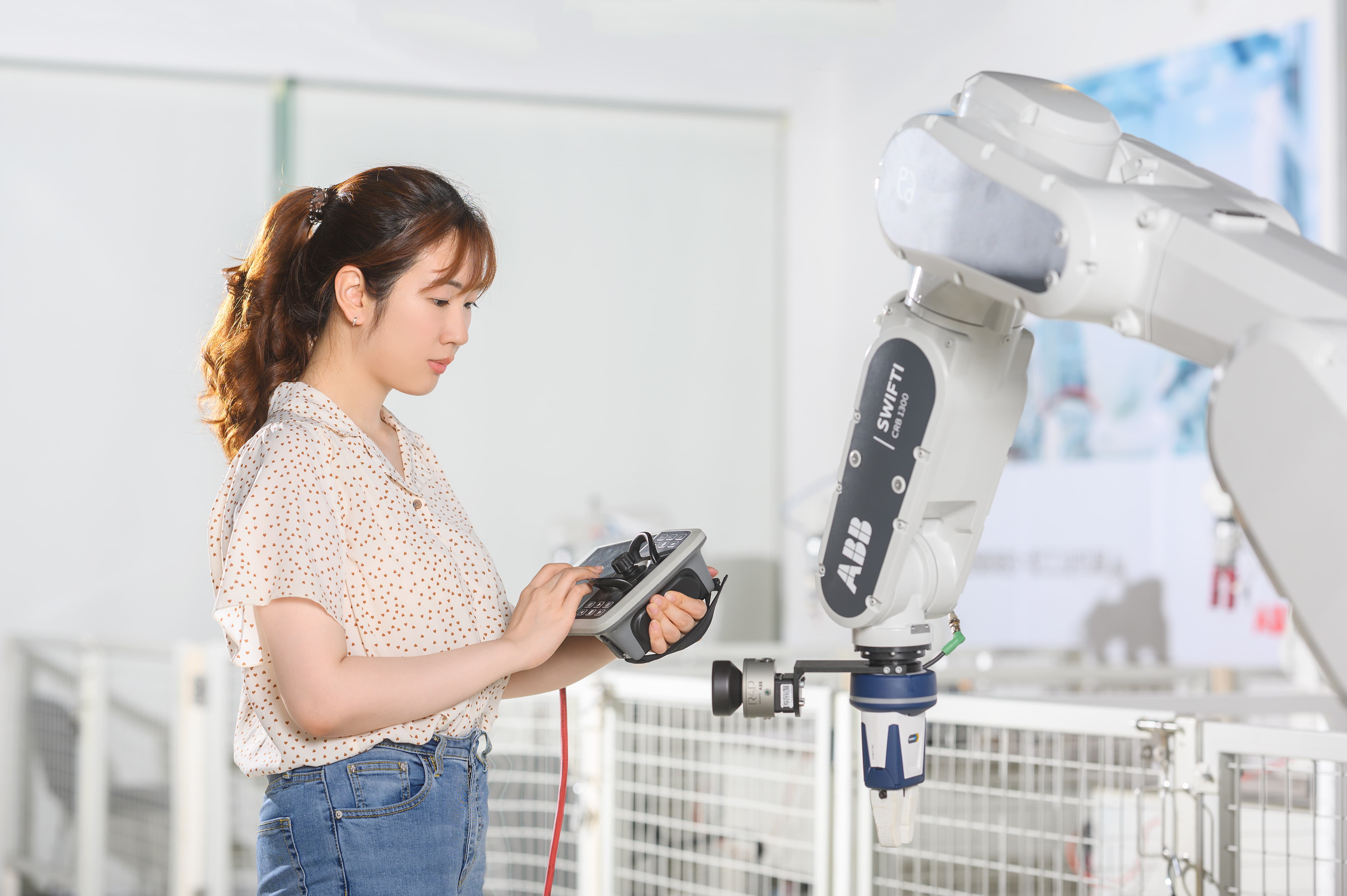 Once the work area is clear and the scanner relays that the cell is once again open, normal operation of the robot continues at full speed. An interaction status light is built into the robot which relays the status of the robot to workers within the area. ABB has focused on making scanner set up simple for programmers and engineers available via the handheld FlexPendant operating unit.

Programming is also simplified for the SWIFTI CRB 1300 with two options available to engineers or programmers looking to integrate the robot into specific plant processes. Programming is possible using either walk-through programming with points added as the robot is physically jogged through useful positions or by using traditional programming methods. The SWIFTI is part of a larger lineup of cobots offered by ABB featuring payloads of .04 kg to 11 kg depending on desired application.

ABB has taken a unique look at the world of cobot design. They have managed to create a more efficient cobot capable of higher speeds through their unique safety system that optimizes movement speeds based on the robots relative proximity to workers. The safety system also helps to reduce costs associated with expensive physical safety barriers.